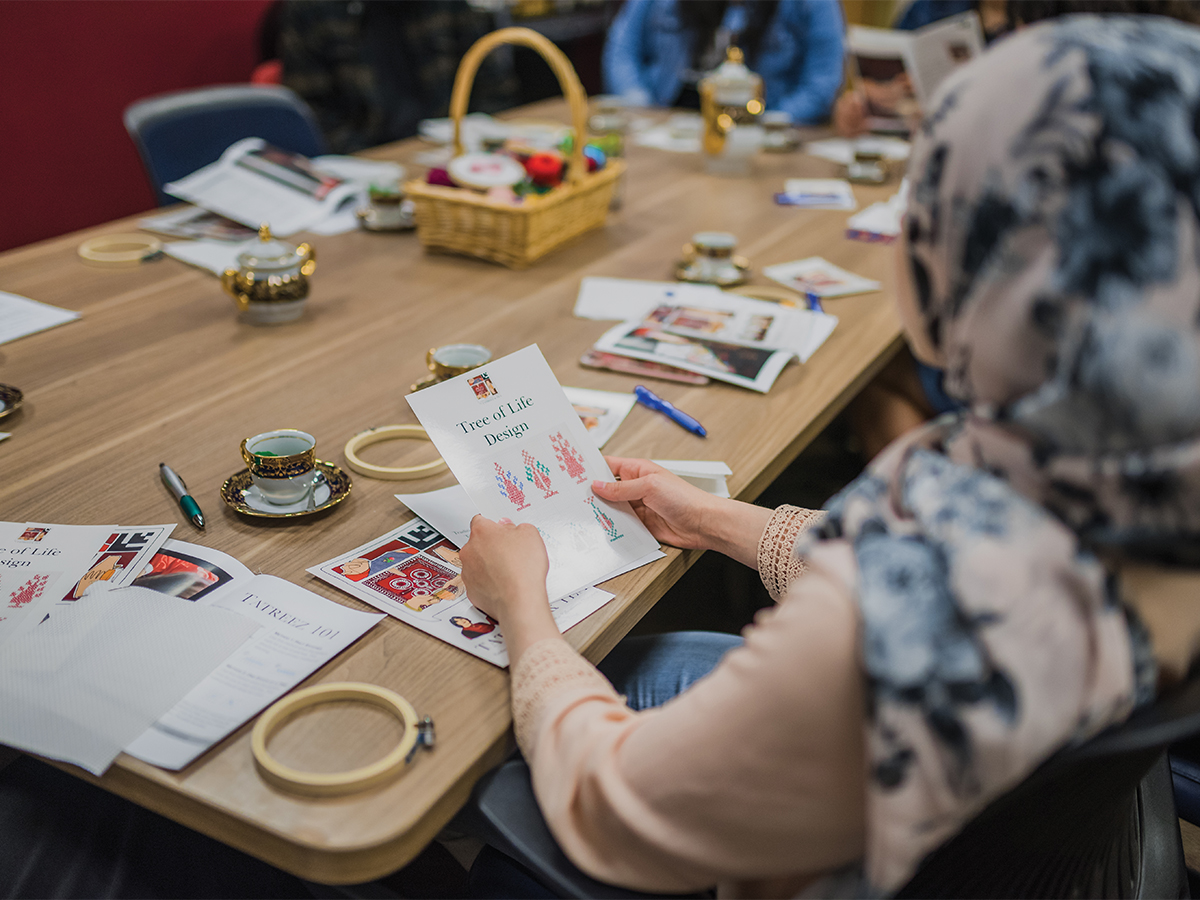 A blend of intimacy and coordination were on full display at HUB 377 as the Middle Eastern Student Center (MESC) hosted “Tatreez and Tea.” Tuesday around noon, a dozen individuals filed into the small room and sat around a moderate-sized table adorned with pamphlets and empty tea cups. RSVPing was the only means of entry in an effort to keep the numbers low and reinforce the hands-on nature of embroidery. Wafa Ghnaim, the sole teacher of the event, was the businesswoman responsible for bringing authentic Palestinian culture to the UCR campus that afternoon. Ghnaim was taught the art of stitching from as early as four years old. Decades later she took the accumulated knowledge from her mother and apprenticeships to make her mother’s lifelong dream come to fruition. That dream was to publish a book that gave an extensive tutorial on the process of stitching to provide the masses with an encyclopedia of embroidery crafted by a real force in the Palestinian stitching community.

In countries such as Palestine, tea is a method of bringing communities together in a kindred fashion. To folks belonging to those communities, tea is more than a remedy for the sick or a beverage to quench thirst — it’s a bonding mechanism that enables families to sit down and indulge in lovely conversation. Additionally, embroidery is also a means of chronicling the trials and triumphs of Palestinian culture that remain preserved throughout generations with grandiose garments and cloth. Material items aren’t made to last forever, but many Palestinians believe that creating art from their rich history is a worthwhile way to ensure their stories cross over to the next generation. Ghnaim in particular uses teachings passed on from two generations of her family in an attempt to weave their perspective narratives into the overarching tapestry of Middle Eastern culture. According to Ghnaim, embroidery boosted her confidence and enabled her to “reclaim her Palestinian identity in the diaspora.”

For this particular workshop, Ghnaim suggested that all of the beginners work on stitching something known in Palestinian culture as the “Tree of Life.” Aside from being one of the easier things to stitch together, the tree itself is a celebratory design that commemorates life. And despite its generalized meaning, anyone has the agency to embed it with their own message. One of the primary stitches used in Palestinian embroidery is the “cross stitch.” If done correctly, the cross stitch should appear as an “x” and is then repeated in succession to create designs. It’s the preferred way to stitch because the secondary method involves skipping stitches which leaves the knitter more vulnerable to losing their place and scrambling the remnant pieces of cloth in back.

Midway through the workshop, one of the coordinators went around the table and poured herbal tea for each attendee. Along with that, Middle Eastern music played in the background to capture the essence of an actual tea session to boost the vigor each student had for their project. Since the art of embroidery is incredibly intricate, many of the students had trouble finding the small, perforated holes that are important to track when making a cross stitch. In Palestinian culture, there is a huge emphasis on maintaining neatness on both sides of an embroidery. That’s why it was imperative for the students to be meticulous about how they were threading because anything less would be the mark of an amateur. The novice knitters were given Aida cloth to carry out their designs, which according to Ghnaim, is more accessible to beginners because of its large holes that more easily hold a crease.

Although Ghnaim would leave the students to twiddle to their heart’s content, she frequently circled the table and assisted anyone with a threading mishap. Many of the issues stemmed from miscalculations in the measuring of string or going off design by missing a designated hole. While helping, Ghnaim briefly mentioned collecting all of the candids taken at the event to compile them in a future book. She stressed that even if people did not finish their designs, they at least had the chance to be introduced to the basics of embroidery. Through her lesson, Ghnaim passed down the beauty of stitching to a group of young adults who weren’t wholly aware of its cultural significance. And even without any blood relation among any of the students, the combined efforts of the MESC and Ghnaim made the quaint room an inclusive place for people inquisitive about Palestinian traditions.

Due to the nature of embroidery, none of the students even got halfway done with their projects, but many of them got a first-hand lesson on the amount of focus and precision that goes into Palestinian art. Ghnaim didn’t just bring in an authentic portion of Palestinian culture, she managed to weave together the worlds of several different students together to continue spreading the wonderful art of embroidery and stitching.