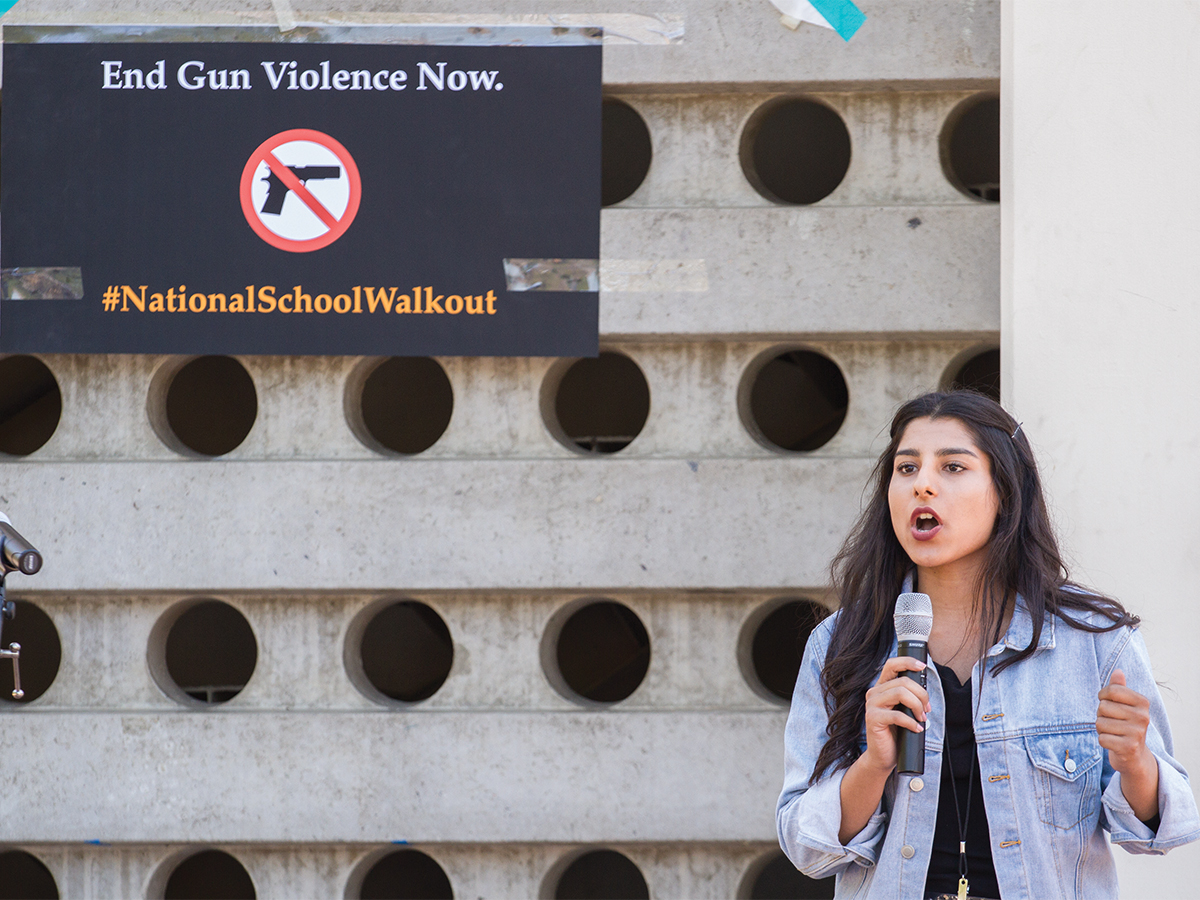 “The residue of many bullets lives within me.” These were the words of Katherine Maldonado, a sociology graduate student speaking at the National School Walkout event, a protest against gun violence that occurred by the UCR bell tower Friday, April 20.

On the 20th anniversary of the Columbine High School mass shooting, which claimed the lives of 15 and injured 24, Maldonado and others recounted their personal experiences with firearms and gun violence, and offered their opinions on how to deal with this problem that, according to organizer Andrew Eneim, “occurs every day.”

The event, which drew a crowd of about 70 individuals, was organized as part of a nationwide youth-driven response to gun violence in the wake of the Parkland, Fla. shooting at Marjory Stoneman Douglas High School, which resulted in the deaths of 17 and the further injuries of 17 others. The shooting, perpetrated by 19-year-old student Nikolas Cruz, stands as one of the deadliest in history.

Eneim, a third-year cell, molecular and developmental biology major, and co-organizer Jeremy Jurgens, a fourth-year sociology student, set up the event, which was promoted exclusively through Facebook. The march was aimed to promote the debate and discussion of firearm violence on the UCR campus. After a few brief words of introduction, Eneim, wearing a t-shirt that read “This Student Calls BS,” turned over the microphone to a host of other students and allowed them to speak briefly and voice their concerns regarding the debate.

Among these was Maldonado, a “mother, daughter, sister, friend and researcher,” who claimed she was “sick of seeing funeral roses.” Maldonado recounted her childhood growing up in South Central Los Angeles, an area renowned for its high rates of violent crime. Her first encounter with firearm violence occurred when her father, a taxi driver returning to work, was shot and killed. Maldonado was two days old.

Jurgens also recounted his own experiences with gun violence, sharing with the audience a recent incident in which a close friend nearly committed suicide after buying a gun. Jurgens pointed out the need for gun control, while also calling for increased attention to mental health issues. “He’s a jerk for not telling me about it until three months later,” Jurgens explained. “You are more likely to kill yourself, statistically, if you have a gun in the house.” Although his friend survived the experience, Jurgens lamented, “I’ve known this guy since we were little kids, and all that time he’s battled depression. And he still had a gun.”

Mental health, a consistent talking point in the discussions about gun violence and mass shootings, also featured during the event, with multiple other speakers referring to the issue as either a primary driver or smaller factor causing firearm-related tragedy. A table set up near the Bell Tower on behalf of UCR’s Student Affairs Case Management contained a wealth of pamphlets detailing the mental health resources available to students under the purview of the office of the Vice Chancellor of Student Affairs.

Behind the table was Penny Key, the director of case management, who offered The Highlander her insights on mental health issues. “We have a lot of support resources on campus, and we want students to make use of these supports,” said Key. Regarding the percentage of students seeking out help from Case Management and the similar but separate Counseling and Psychological Services (CAPS), Key remarked that she had observed a spike in mental health cases during the fall quarter, with higher than average numbers persisting through winter. Past winter quarters, according to Key, had been the highest; she expressed her opinion that the initial increase in cases was due to “a general feeling of uncertainty.” For college students in particular, Key said that many may have been “reflecting on their lives, causing a lot of anxiety which becomes overwhelming.”

Alan Nguyen, a fifth-year electrical engineering major and president of the UCR chapter of

the College Republicans, also spoke about mental health as important to understanding gun violence. Nguyen, a self-described “short Asian guy with a cowboy hat,” took the microphone to rebut the claims in favor of gun control offered by the previous speakers. Nguyen spoke about his childhood, during which his family home was broken into on multiple occasions by armed burglars. He said he bought three firearms as a response, which he credited with resulting in a feeling of safety and security. Nguyen expressed sympathy for those suffering from gun violence, and emphasized the need for a productive and inclusive conversation surrounding the issue.

“We’re here to represent lawful gun owners,” Nguyen told The Highlander, adding that he felt that “gun ownership had been demonized.” Standing in front of a booth bedecked with the American flag and with posters reading “I’m pro-gun: change my mind,” Nguyen explained his organization’s embattled stance. “We’re all about not giving every Tom, Dick and Harry a gun. We just want federal gun laws to be enforced before adding more laws that affect good people.”

Nguyen’s stance was echoed by several other speakers, who expressed their support, to varying degrees, for respecting the right to buy and own weapons. Despite the potentially polarizing nature of the topic, calls for respect from the organizers resulted in a conversation largely free from personal attacks and emotional responses.

Although pleased with the tone and scale of the event, Eneim indicated that he hopes for a continuation of the discussion surrounding firearm-related violence. “We had multiple contradicting viewpoints come up and speak,” he said. “I think that’s the beauty of it. I think it’s gonna be really good now that we’ve been able to start that dialogue, and it’s important that we continue it.”