Highlander
Home Radar Politics in gaming, or the “Far Cry 5” fiasco: You can do... 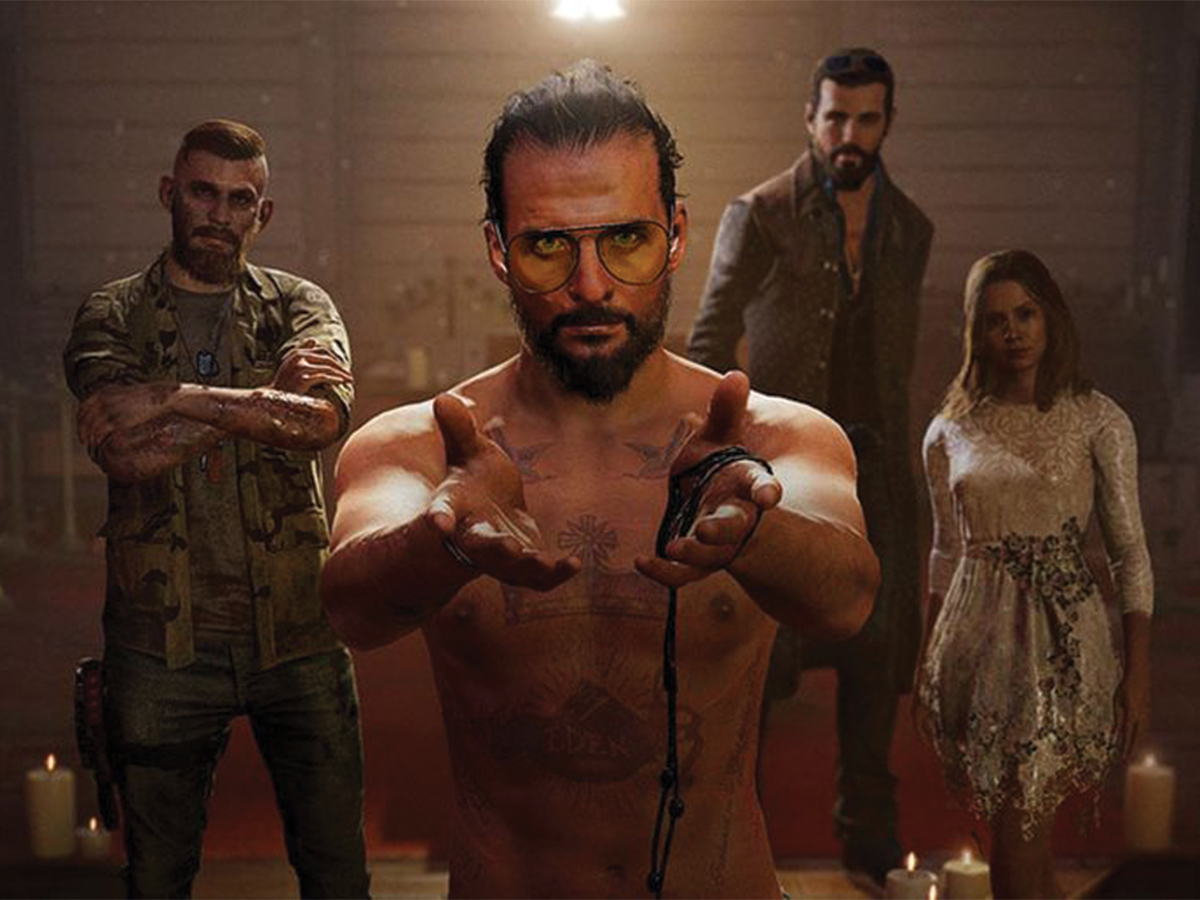 There comes a point across the 40 or some hours of “Far Cry 5’”s expansive open world where you realize that the bold leaps it suggested it would take turn out to be mush. About two hours into the much more brief, linear campaign of “Wolfenstein II: The New Colossus,” it’s clear that developers MachineGames have their fingers on the pulse of some of the social anxieties plaguing America. They don’t exist on polar opposite sides on the spectrum of quality, but it’s clear that each game’s respective developers took drastically different steps when constructing a politically charged world. Both games promise some incredibly satisfying gameplay that feeds on power fantasies aimed at white supremacist rule, but only “The New Colossus” delivers on that promise. Meanwhile “Far Cry 5” is much more content backpedaling the poignant social commentary we thought it would deliver.

It seems like forever ago that Ubisoft revealed the first glimpse of “Far Cry 5.” For a series signified by its exotic locations, bombastic action and intriguing villains, the unveiling of the next installment to be set on U.S. soil was refreshing. The fictional location of Hope County, Montana, felt like a direct response to the criticism that “Far Cry” was a series built, to some extent, on racist tropes.

In “Far Cry 2,” you get to choose from a number of different characters — an American, an Albanian Haitian and an Algerian, among others — and are tasked with taking down an arms dealer supplying weaponry to opposing factions of a civil war in an unnamed country in central Africa. Notwithstanding the worn trope of barbarous Africans constantly embroiled in civil war, it’s about as racist as, say, “Resident Evil 5” is (which is to say it’s not).

On the other hand, playing as a rich 20-something year-old white dude on vacation, getting kidnapped, hunted down and nearly forced into human trafficking by ambiguously racialized pirates on an island neighboring Indonesia in “Far Cry 3” felt a bit more nearsighted. Not racist per se, but it established the series’ eye for the exotic Other, exemplified best by the noble savages of Rakyat. Naturally, your protagonist is on a quest to save his brother and help liberate the Rakyat from the clutches of the pirates, like the white savior he is. There are arguments in defense of its writing, calling its choice of character and tropes a critique of imperialism, but what little evidence there is in support for this reading are blown to smithereens by the end-game’s careening insanity. Really fun game, but a bit over-reliant on questionable narratives we’ve seen before.

“Far Cry 4” was a step forward in untangling the legacy of imperialism that left the locales of “2” and “3” the way they were. Rather than simply exploring an exotic sandbox filled with gun-toting Asians in another fictional location, Ubisoft makes attempt to editorialize the landscape with its commentative side characters.

Last year, a follow-up to 2014’s “Wolfenstein: The New Order,” an alternate history FPS set in the context of a Nazi-won WWII, was released to a storm of discussion over the politics of punching a Nazi. Seriously, of all things, we should agree that punching a Nazi is objectively a palatable thing regardless of ideology, right? Anyway, the revenge fantasy of a Jewish ubermensch dismantling the Reich was innately political; the worst case scenario could have painted the villains as little more than mustache-twirlers devoid of substantial examination, and still could have been political.

The reason I bring up “Wolfenstein” is because, like “Far Cry,” it’s published by a gaming industry giant, Bethesda Softworks (not to be confused with their “Fallout” and “Elder Scrolls” devs, Bethesda Game Studios). From that angle we know that it’s possible to tackle real-world problems through the medium. When “Far Cry 5” was shown, gamers quickly flooded forums and YouTube comments to complain that politics have no place in the medium. While a chunk of the game’s development predated the political storm Trump spun, the story of a militant fringe religion could have been told as far back as the series’ glory year of 2008 and still resonate. Where one game shows integrity and trust in the people who will eventually play it, the other shows reluctance that borders on cowardice.

Back to “Far Cry 5” though. Rural Montana, or really any point on U.S. soil, pointed to an attempt by Ubisoft to rectify problems of the previous games’ writing. Gameplay, too, but that’s another can of worms.

Channeling a bit of Jim Jones with a dash of David Koresh, pepper in the appearance of a goofy manbun-sporting Angeleno and you get Joseph Seed, The Father. The mastermind behind the Project at Eden’s Gate and his militant supporters (whom the local folks refer to as “peggies”), Joseph follows in the footsteps of previous “Far Cry” villains. He’s intimidating, influential and surprisingly elegant. Whenever you do get the chance to meet him, it’s tense, due in no small part to the brooding presentation and measured performance by Greg Byrk.

But every villain needs a motive, even guys who never wear shirts and always rock manbuns. This is where Ubisoft really dropped the ball. Eden’s Gate is, ostensibly, a religious doomsday cult: Far-right (or ultra left, depending on your reading), anti-government, pro-gun, agrarian, domestic terrorists seizing an entire county on the pretense of divination. But don’t call them Christian, or Republican, or any other label remotely tied to real-world demographics, because Ubisoft is toothless in stirring conversations surrounding real-world issues. They’re boringly crazy and high on the hallucinogenic Bliss, a drug not unlike scopolamine.

This isn’t to say that Christians or Republicans are Bad, or that everyone else is Good. That’s absolutely absurd. Hell, Eden’s gate violently rejects Christianity for some never-defined Abrahamic offshoot just to make the peggies seem more artificially (and less believably) evil.

But to set your game in rural Montana in a post-Trump world, you can’t just walk on eggshells because investors might feel that those demographics might be offended. Even outside of that context, there’s plenty of interesting political angles the game suggests an interest in mining. Take a stance, Ubisoft; you’ve provided glimpses of critical thought in previous entries, why withdraw when you have such prime real estate for legitimate discourse? Anything would have been better than apoliticism.

The biggest shame is that “Far Cry 5” leaves behind a breadcrumb trail of almost intelligent thought. Of course, you really have to dig for that stuff. The Seeds — Joseph and his equally psychopathic lieutenants, John, Jacob and Faith — have one-dimensional motivations for taking arms and forcing their quasi-religious spittle. Some in-game notes and diaries flesh out their worldview and the bystanders they affect, but they’re few and far between, not to mention only fragments of what a real-world version of these people would be like.

Jacob’s manifesto reads, “We have polluted our minds by letting the pathetic sycophants that run our government support those that can’t help themselves. They are our anchors, holding us back.” Where’s more of that introspection? The game would have benefited from exploring the warped perspectives of the rural Montanan, betrayed by the false promises of the government despite possibly being in favor of the bigoted stuff, prepping for a nuclear holocaust and murdering any government errand boys who come in the way. (And it can’t be argued that the game exists on the periphery of a Trump presidency, there’s an absurd quest literally about retrieving the mythical golden shower tapes.)

There’s a Vice article that got a lot of undue heat about the abundance of black people in “Far Cry 5’”s open world, and I think that heat is symptomatic of just how afraid most gamers are of their medium of choice taking a stance on real-world issues. Dexter Thomas, the author, points out that, for the location of rural Montana and for the militant Eden’s Gate, there are too many black folks. And that’s so true. It’s not just that there’s a lot of black peggies, but even the inclusion of a noticeably large count of black NPCs is telling of, as he puts it, “(occasionally awkward) efforts at inclusion.” There’s a rich amount of context that could have been explored, but, again, Ubisoft missed the mark.

In a couple of ways, “Far Cry 5” and “The New Colossus” are inverses in AAA gameplay and story. I could play “Far Cry 5” for hours and have fun and gain absolutely nothing from it — which I have; I can only play “The New Colossus” for so long, though: It’s not a very meaty campaign and its side content is pathetic. The difference is, I can talk about the richness in “The New Colossus’” story for far longer than I can with “Far Cry 5.” (A rebuttal to the contrarian asking what’s the difference in wasting time in “Far Cry 5” and an equally plotless game like “Nioh” or “Fortnite: Battle Royale”: Neither of those games or games like them made the slightest attempt to resonate with political climates.)

“The New Colossus” is a gloriously blood-soaked power fantasy, as much an absurd shooting gallery as it is a haunting reminder both of what could have been and could still be. It’s a stark contrast to be in a room with a decrepit and paranoid Hitler, a tried and true embodiment of evil, to then plow through a Nazi base on Venus and eviscerate their goons with a hatchet. It’s simultaneously enamored with the banality of evil in KKK Klansmen taking orders from Nazis as though they’re the Reich’s lapdogs, and amused by the image of a topless pregnant women mowing down Nazis with akimbo machine guns as their blood pours over her. Like “Far Cry 5,” notes litter the game world, but here they actually flesh out a world where Americans are forced to adapt to Nazi rule.

Unlike “Far Cry 5,” though (which is just as loony) there’s a legitimate reason for all of that. Ubisoft ridiculously takes the piss out of everyone with no comment. MachineGames’ ridiculousness is the gunpowder to “The New Colossus’” Sturmgewehr, and its target is the absurdity of white supremacy itself.