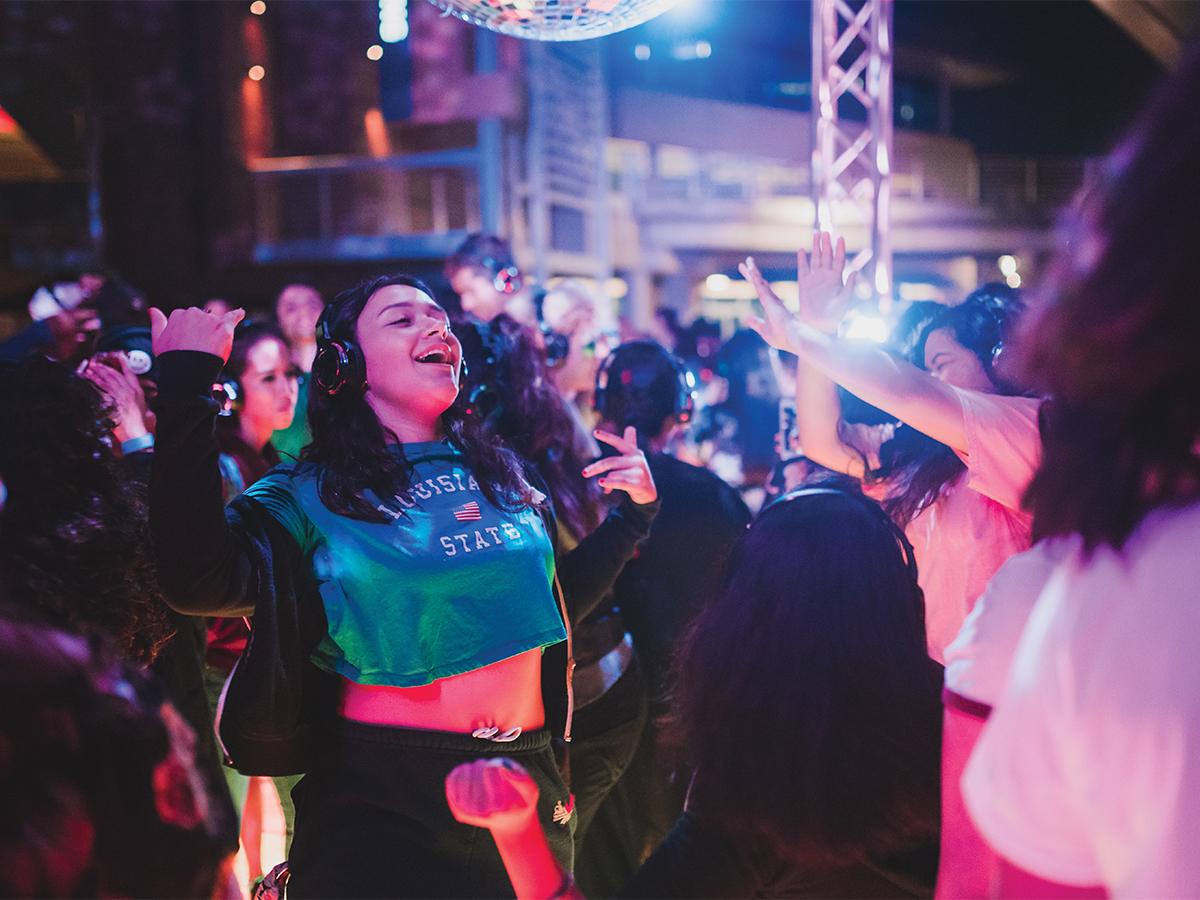 The floor of the HUB Plaza flashed pink, purple and blue last Wednesday night as a disco ball spun overhead. Students signed in and were handed headphones that glowed with a mix of red, blue and green lights. With the push of a button they could switch between three stations: A ‘90s and 2000’s throwback station, a hip-hop station and an EDM station DJ’d by Luca Lush. Outside of the dance area was a body paint station and a taco truck.

This was the scene of ASPB and HUB Programs’ Silent DisGlo, held Wednesday, April 25.

Silent discos date back to the early 1990s, where such dances were held by eco-activists who did not want to cause noise disturbances to the local wildlife. In 1994, the Glastonbury Festival was the first to adapt the trend as a way to let festival goers enjoy the event while also allowing neighborhoods closeby a quiet night. It wasn’t until 2005 when the term “silent disco” was coined at the Bonnaroo Music Festival. In 2008, a silent disco company HUSHconcerts began touring America to hold “silent raves on boats” and wireless headphone parties on the beach.

Silent discos serve a similar purpose on college campuses by allowing students to dance to music on a Wednesday without disturbing the usual quiet atmosphere of campus at night.

One aspect of the silent disco that I found amusing was how personalized of an experience it is. While there were only three stations to choose from, the user could switch between them in a matter of seconds. There was a song for everyone. One second, one can listen to Panic! At the Disco’s “Sugar We’re Going Down” and as soon as it’s over, switch over to hear what Luca Lush was currently playing. Another nice function of the headphones was that you could adjust the volume, so you could dance with the music at your preferred level.

While a silent disco may look like an isolated activity, there were plenty of friends dancing together in groups throughout the dance area. One could either dance on their own, or join the multitude of people showing off their moves around the dancefloor.

To an outsider, the silent disco looked bizarre. If you took off your headphones, then you could hear the numerous people singing Katy Perry’s “Teenage Dream.” The best way I can describe it is as if you were watching a music video without music. It looked just as amusing when line dancing songs came up on one station. You would have half of the dance floor dancing to “Caballo Dorado” and the other half dancing like normal to a Jason Derulo song.

Overall, I would recommend anyone who has not gone to a silent disco to try it. While the idea seems strange at first, you still feel connected to the other people just by knowing what song they are listening to.