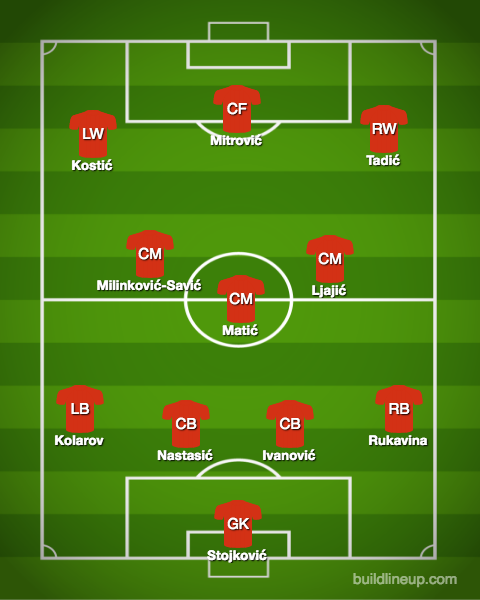 Coach: Mladen Krstajic, Serbian (2017-present). Previously the caretaker coach for Serbia before being promoted in Dec. 2017.

The 32-year-old left back and team captain will be coming off of a season in which he played a key role in AS Roma’s Champions league semi-final finish as a left back.  Not only does his age and experience give him an advantage, but he has had two goals and eight assists so far in 31 games in the 2017-2018 Serie A season. Known for his ability to cross and bring the ball forward from the back, he will be a valuable part of this Serbia team that is looking to advance to its first ever FIFA World Cup knockout stage. His veteran presence will be vital to Serbia’s chances of making a strong run in this summer’s tournament.

Known as a “complete midfielder,” the 23-year-old Lazio midfielder will likely be the most important player for this team on both sides of the field. At 6’4, he is one of the most physically imposing midfielders in the world and his technical ability has led to comparisons to former French legend Zinedine Zidane. Internationally, Milinkovic-Savic had a heavy influence in Serbia’s victorious FIFA U-20 World Cup campaign, being awarded the bronze-ball. He received his first call-up to Serbia’s senior national team in 2016 for a European Cup qualifier and has appeared in recent friendlies against China and South Korea. This World Cup, Milinkovic-Savic will be looking to prove that all of the hype surrounding him is warranted.

Prediction: Round of 16 elimination