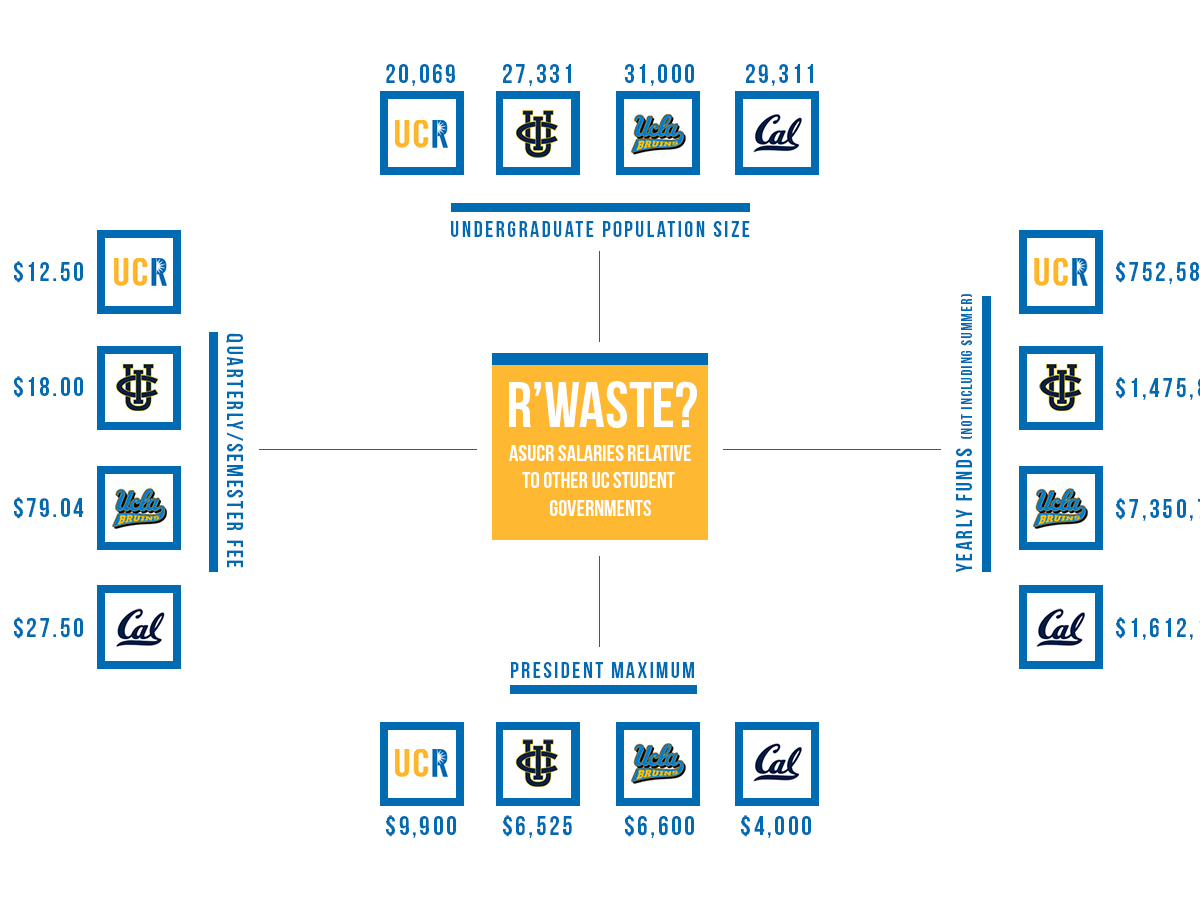 At a Legislative Review Committee (LRC) meeting Wednesday, May 16, a subcommittee in ASUCR that reviews and edits bills before they are debated on the senate floor, killed a bill that would have reduced ASUCR Executive Cabinet (ECAB) stipends by about 60 percent. CHASS Senator Mariam Alkhalili’s bill would also set the standard stipend for all other officials to $1,485, the current stipend for senators.

Alkhalili said that the chair of the LRC, Senate Pro Tempore Martin Cuenca, argued that the bill was “unnecessary” and it should be proposed next year. Alkhalili said that the members of LRC tried to end the meeting early and table her bill before it could be proposed. “It was clear that this was just an excuse … with bills that they don’t want to happen … they don’t always follow the rules 100 percent,” said Alkhalili. “They weren’t willing to cut the bill any slack nor were they willing to listen to the proposal or the numbers,” she added. The final vote in LRC was 5-0-1 to table.

Currently, five ECAB members, the president and four vice presidents, make $9,900 a year, paid biweekly over a period of 12 months. Alkhalili, a second-year political science major, is seeking to lower ECAB salaries to $3,960 a year, a cut of 60 percent. “Currently, stipends account for more than 15 percent of the overall student fees,” said Alkhalili referencing the $12.50 quarterly fee every UCR undergraduate must pay. Currently, ASUCR spends over $106,000 paying out student stipends, according to a document provided to The Highlander by Alkhalili.

In her proposal, Alkhalili calls for no more than 10 percent of ASUCR’s student fee to be allocated to representatives’ stipends. “This organization exists to represent, advocate for and support students on campus,” Alkhalili writes, “These positions do not exist to provide personal gain and financial stability for elected students but rather to serve the student body.” Alkhalili hopes to save $39,125 annually if her plan is successful.

Alkhalili drew a comparison between three other UC schools’ Associated Students (AS) governments — UC Irvine, UC Berkeley and UC Los Angeles (UCLA) — which have a much larger student body, higher student government quarterly or semester fee than UCR, but a lower salary for their AS president. UC Irvine has 27,331 students enrolled and a student government fee of $18. Their president, Lydia Natoolo, makes $6,525, $3,375 less than ASUCR’s President Aram Ayra. At UCLA, with an enrollment of 31,000 and a quarterly fee of $79.04, their president is paid $6,600. The lowest salary of the three universities is at UC Berkeley. With an enrollment at 29,311 and a semester fee of $27.50, their president, Zaynab Raynad Abdulqadir-Morris, makes $4,000 a year.

“UC Riverside’s president makes more than any of those campuses and they (the campuses) have much more students and their fee is much higher than ours,” said Alkhalili in a phone call on Friday. “We should not be making this much in student government … it should be free,” she said.

There does remain one caveat in Alkhalili’s plan. The Associated Students Program Board (ASPB), which hosts events on campus such as Spring Splash and Winter Soulstice, have a board of directors who are also paid stipends which are not allowed to exceed that of ASUCR’s president, the maximum level a representative in ASUCR can be paid. Currently, the ASPB chairperson makes $8,736 a year while each director makes between $5,460 and $6,522 annually.

Alkhalili does not seek to alter ASPB’s stipends since it comes out of the ASPB fee, currently $30 and separate from ASUCR. During the Friday conversation, Alkhalili mentioned that she plans to introduce a bill to remove the cap on ASPB stipends so that if ECAB salaries are lowered, ASPB would not be affected.

There is some support among her fellow senators, chiefly CHASS Senators Marco Ornelas and Roy Tongilava. Ornelas shared in an email to The Highlander why he supported stipend reform. “Even before I was elected into ASUCR, I knew that a large stipend and red parking pass was attracting the wrong people to these positions,” wrote Ornelas. “After joining ASUCR and being acquainted with the work output of these officer (sic), I can confirm that they are getting paid too much for the minimal work they do.” Ornelas clarified that he does not think that they “do not do work” or are “incompetent,” but are simply paid too much.

Ornelas was “disappointed but not surprised” when he heard that the bill was killed in the LRC. “I don’t expect a stipend reform bill to ever reach the floor of the Senate, and if it did, it would not pass,” he wrote.

Since the deadline for new bills has already passed, Ornelas has decided to concentrate his efforts in educating the 2018-19 senate on the bill’s importance. “I worked hard to support a lot of candidates that ended up winning seats in ASUCR. I will advise them to elect a President Pro Tempore who pledges to bring a stipend reform bill to the floor,” wrote Ornelas. He also seeks to “explain to them why this issue is so problematic because many students do not understand that the high salary of these positions attracts money hungry individuals who do not care about the student population.”

Cuenca did not respond to a request for comment. Cuenca is vice president of external affairs-elect for 2018-19 and would stand to be paid $9,900 a year if stipend reform fails to pass.

Tongilava also did not respond to a request for comment before time of print.

Wednesday’s LRC meeting was the last meeting for the year, and since Alkhalili’s bill was defeated, it would theoretically have to wait until next year. Alkhalili plans to override the LRC and finance committee by a two-thirds vote in the senate once her bill reaches the senate floor. However, Alkhalili is uncertain if it will pass stating “I wouldn’t know if they (the senate) would even be willing to have the conversation,” but she is nonetheless hopeful.

On Wednesday, May 23’s meeting, Alkhalili will introduce her bill to remove the ASPB stipend cap and “start a conversation” on stipend reform.