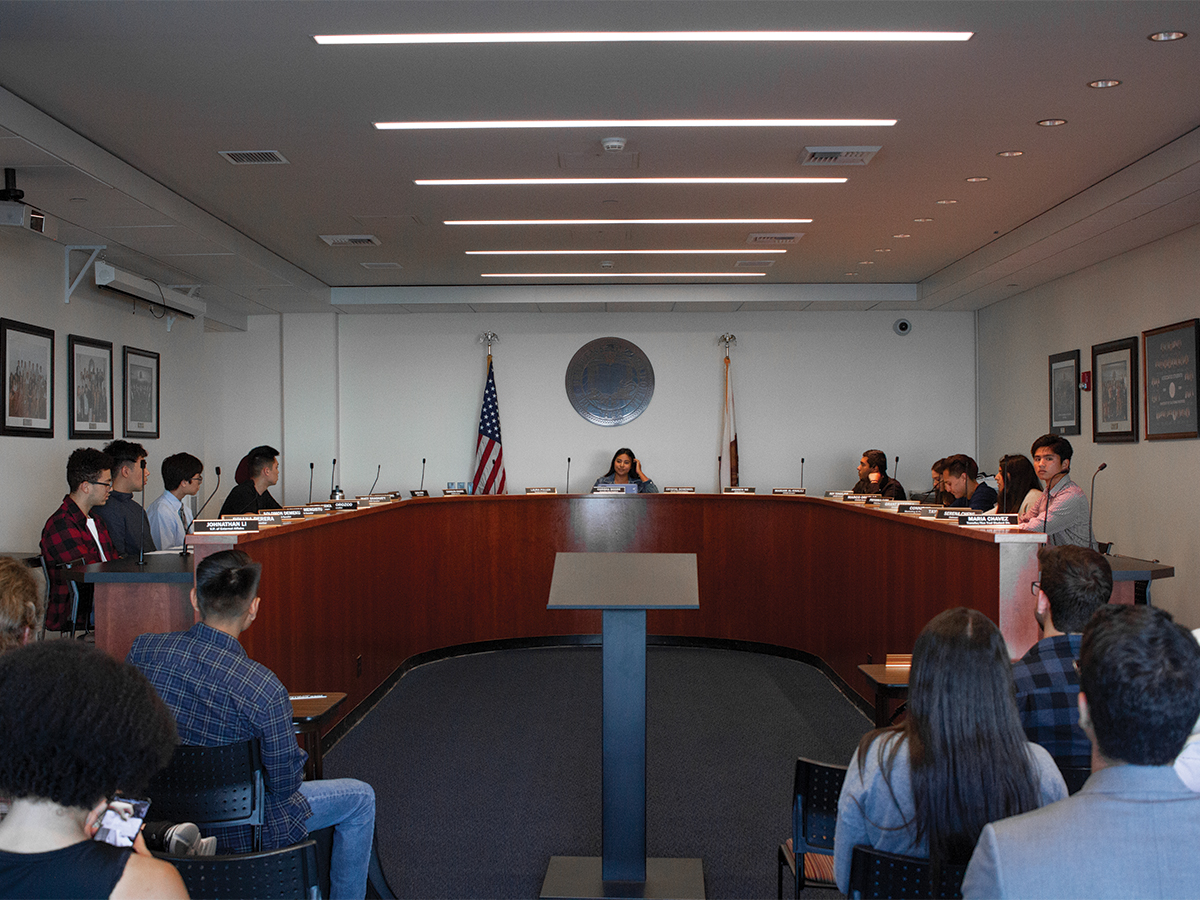 The new ASUCR senators held a special election on Tuesday May, 22 in order to determine the unfilled CNAS senatorial seat. After all 17 candidates gave two and half minute speeches and responded to questions, a vote decided the top two. Current Executive Vice President Carisha Moore and newcomer Wajeha Mahmoud made it through, and then closed deliberations took place to determine the winner.

Mahmoud, a biology major and third year transfer student, emerged victorious by an unknown margin. Her speech focused on leadership credentials and on expanding opportunities for marginalized students. “There aren’t that many research opportunities offered for undocumented students and freshman students,” said Mahmoud. “I’ll work on having more opportunities for more people. Research is for everyone.”

Mahmoud transferred to UCR this past winter, making spring her second quarter. According to Article 3, Section 3 of the ASUCR Constitution, “candidates must have been in attendance at UCR for a valid Confirmation of Enrollment in Classes or through other proof provided by the University Registrar, cumulative total of at least one (1) academic year prior to serving in office.” Her victory appears in conflict with this stipulation. Although nothing in the bylaws provides guidance as to possible exceptions to this, the judicial council is responsible for deciding whether an exception can be made. The judicial council has jurisdiction over all elections-related matters.

For the first vote, new senators wrote down their top two picks and tallied them up. After Mahmoud and Moore were chosen as the top two, all the other candidates left. The final round involved closed deliberations among the 2018-19 cohort of senators, as well as Elections Director Taylor Brown and several executive cabinet members.

According to Article 2, Section 4 of the ASUCR Constitution, “All official meetings of the Senate and its subordinate bodies shall be open to the public, except for closed sessions which may be called during a regular meeting for the discussion of personnel and employee grievance matters, investment decisions and litigation.” The senate does have the authority to table appointments for later closed sessions, according to Part 5, Section E of the elections code: “All confirmation deliberations shall be open to the public, unless the ASUCR Senate tables the appointment to a closed session by a majority vote of the entire Senate.”

The process was guided in part by Vice President of Internal Affairs-elect Jose Cortez-Hernandez, who expressed concern over the speediness of the process. “Essentially why I was calling for a closed session process is just for all of the senators … to flesh out the pros and cons between each candidate,” he said during the meeting. “I feel like going through 17 candidates in one hour is not a sufficient amount of time.” He said that he feels like the vote should not be a “rushed process.”

Also according to Cortez-Hernandez, “Only seven of the applications were presented to the senate because nine of them were added on less than eight hours before the meeting.”

Timothy Hughes, a second year environmental studies major and also ASUCR presidential protest candidate “Furry Boi,” ran to fill the seat as well. In an email to the Highlander regarding the special election, Hughes described the experience as disorganized: “The process was not efficient in any way,” he wrote, “the event seemed to go on as though there was absolutely no planning beforehand. Taylor (Brown) had a disagreement with the EVP on how it should be carried out and they came up with the new procedure for how the voting would go.”

According to Hughes, the initial voting procedure was supposed to involve only five candidates who would all give speeches. After deliberations and a vote, one candidate would be confirmed. Describing his application experience, Hughes wrote that an email was sent to the candidates letting them know if they would be in the top five. He then emailed Brown about the format and time limit of the speeches they were to prepare. “Taylor (Brown) said candidates would come into the room one at a time and address the senate and that there would be no time limit,” wrote Hughes.

However, all 17 candidates ended up speaking for an allotted time of two and a half minutes each. “As we began (late), the incoming EVP informed the candidates that we would have 2.5 minutes each and that we would all remain in the room and listen to one another talk. Taylor (Brown) arrived late but did not contest this in any way,” he said.