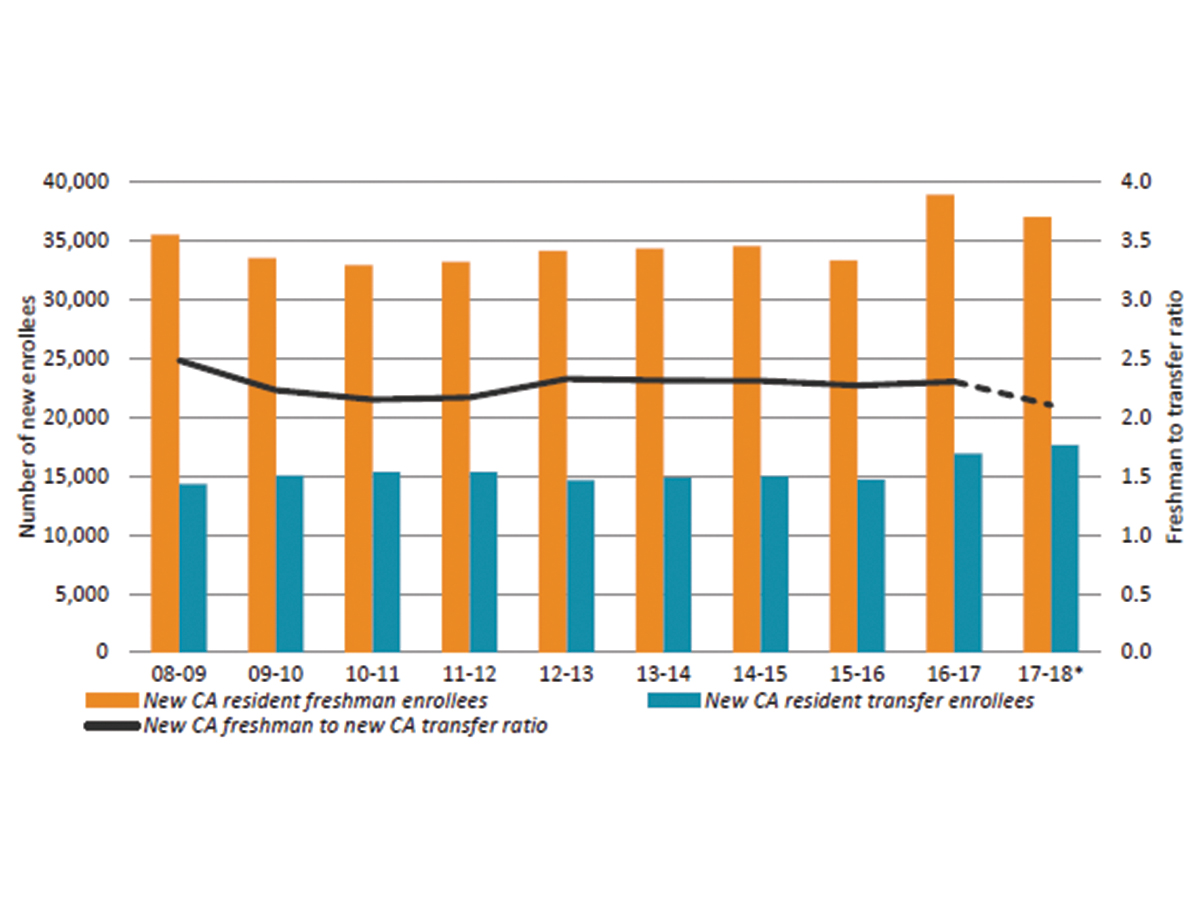 UC Riverside Undergraduate Admissions carried out numerous action plans in an effort to raise UCR’s transfer student population this year. This is in response to last year’s student ratio of about three incoming freshmen to one new transfer at UCR.

If the excessive ratio was left unaddressed, the campus would have faced budget cuts threatened by state legislators and the governor.

The UC system aims for a ratio of two new freshmen to each new transfer in each college. This is in accordance with the California Master Plan for Higher Education, established in 1960 to standardize California’s postsecondary education system and promote the academic growth of its students.

Emily Engelschall, the director of Undergraduate Admissions, elaborated on the estimations of new transfers in an email to the Highlander. “I anticipate that we will enroll approximately 1700 CA resident transfer students (out of 7070 (state-resident) admits) this fall,” Engelschall explained, “and another 250 (of those type) this winter,” for a total of 1,950 new transfers from 8,225 total admits. This is up from around 1,400 enrolled transfers in 2017, which was only up from 1,234 students in 2016.

UCR freshman-to-transfer ratio is the highest among the UC colleges. While UC Merced has a ratio of 11.9 the school is too new for officials to consider budget cuts, since it would stifle all general growth the college still has the potential to make.

Engelschall attributes the increase in transfer students to the collaboration of Undergraduate Admissions with several other groups on and off campus. These groups include Financial Aid, the Career Center, the Academic Senate, the Academic Resource Center’s Transfer Zone, UCR’s current and prospective transfer student body, Student Affairs Marketing and Communications, the Provost, the Vice Provost of Undergraduate Education, the Honors Program, and various groups at the community colleges.

The partnerships surmounted to “nineteen different specific action plans that guided (their) work for the academic year,” Engelschall said. She added that specific actions taken by the collaboration included “visiting all 114 California Community Colleges to make connections with potential students, building stronger relationships with Community College counselors,” and “rethinking the messages we deliver to transfer students surrounding important topics like financial aid, time to degree, and career opportunities after graduation.”

Engelschall noted that the increase in transfers will add diversity to the campus, since the “depth of life experiences” those students possess will be a “huge benefit” to the undergraduate population. She later added that transfer-specific support services are in place to ensure their success, such as the ARC’s Transfer Zone, which was created last year to provide students with “academic, professional, and personal” advice and assistance and attributed by Engelschall as “an important piece of the puzzle.”

These transfer support services are what Engelschall has heard from transfers themselves as the main reason they chose to attend UCR. Engelschall also traces their enrollment to the “multiple opportunities” UCR offers for transfers, such as in-person visits and a transfer student-tailored experience of the campus.

A compilation of UC admission and enrollment statistics can be found here.