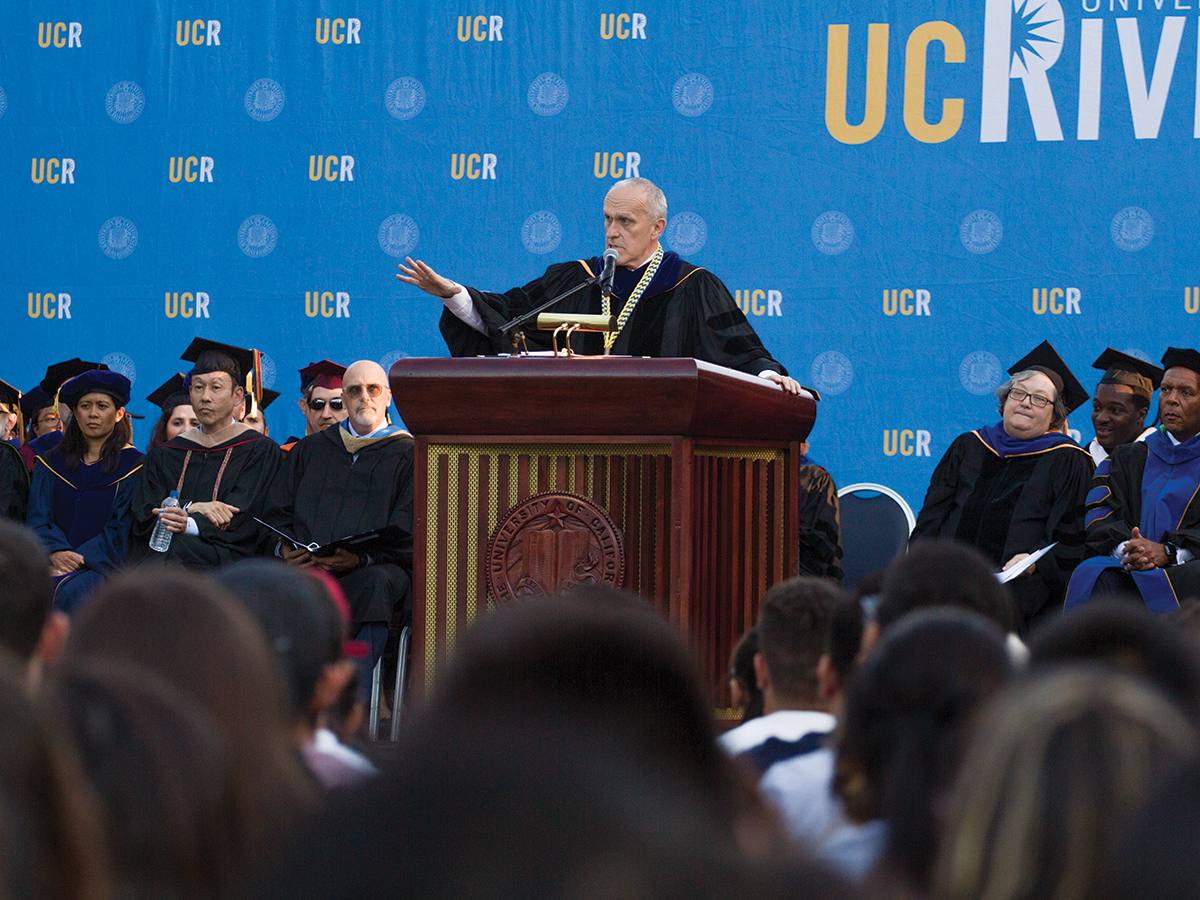 On Monday, Sept. 24, UC Riverside held its New Student Convocation for incoming first-year and transfer students at UCR. The event was organized by the Office of Event Management and Protocol, which reports that there are 4,630 enrolled freshmen and 1,600 enrolled transfers this year. According to an email from Amy Kim, the office’s public events manager, around 3,500 students in total were present at the convocation.

Kim explained that the convocation is a “ceremonial induction into the UCR family designed to promote the shared values of the university – integrity, accountability, excellence and respect.” She also noted that there were “about 86 UCR senior leadership and faculty present at the ceremony, including Chancellor Kim A. Wilcox and Provost and Executive Vice Chancellor Cindy Larive.”

The event began at 6 p.m. on the Pierce Lawn. Students took their seats with the sun setting to their far right behind the Bell Tower and the stage of seated faculty members ahead of them. Larive took the podium to welcome the incoming students and to thank them for coming to the event. She continued her speech by honoring the land that UCR had been built upon, and then introduced the members of UCR’s college administration that were present on the stage behind her.

Larive ceded the microphone to Wilcox, who stressed the importance of student’s role in discovering “future knowledge” and how their active involvement on campus would achieve that. “Some of you might do it in the laboratory,” he illustrated, “or in a research project with a faculty member. But every one of you will shape that future knowledge,” he concluded. “You’ll be worried about the grade your professor will give you (in discussion), but I can assure you those discussions also help the faculty members think about the material.”

Stefany Perez, a first-year major in biochemistry, found the next part of Wilcox’s speech to be “quite memorable,” since “he stated that we (the freshmen and transfers), as new students, were seated within the Pierce Lawn and that in four years or so, we’d meet there (sic) again but as Seniors (sic) and successful Highlanders.”

Also speaking was Jeffrey Krynski, a 1981 alumni of UCR and president of the UCR Alumni Association. He began by saying college would be “an amazing time” of the students’ lives, “a time in which (they) would be tested on many levels.” Krynski later emphasized that everyone should search for experiences beyond just the classroom, that they should “pursue interests that don’t involve textbooks and required reading.”

Attention was then given to Dylan Rodriguez, a professor of Ethnic Studies and chair of the UCR Academic Senate. As chair he found it to be his “unwavering obligation to find, write, teach and speak the truth” to all students and that in doing so “all of us … inherit a significant historical task: to seize on the fact that the University of California at Riverside is a public institution, a public university, founded to serve a public mission, and that this California public looks and lives more like the people sitting on this lawn than it does at virtually any other university campus in the state, the nation or the world.” Rodriguez took note that “to simply recognize that fact is not enough … when not accompanied with a deep, complex and sometimes risk-embracing commitment to transforming the institutionalized power, relations and institutional culture” that students and faculty experience every day.

The final speech of the night was given by Semi Cole, president of the Associated Students of UCR. Cole stated that the new students had “begun a remarkable journey of becoming a part of a community of dreamers and visionaries.” He told the students that at UCR they would “taste the joys of success and learn great lessons from failure” and that “we are refined by the power of our potential.” At the conclusion of his speech Cole led the audience of new students in UCR’s statement of commitment.

Provost Larive concluded by thanking the students for coming and offering academic advice to them before the event reached its end. The on-stage faculty and the crowd of students proceeded to stand and proclaim UCR’s alma mater “Hail Fair UCR,” with music provided by the UCR Highlander Band.

Litzy Guzman, a gender and sexuality studies major, said that she enjoyed the speeches and that each one “resonated with (her) in one way or another.” She felt that all of the speakers conveyed “the sense of community that is built within UCR.”

The convocation ended at 6:32 p.m., with the first-year students then led to the HUB for dinner and socializing.