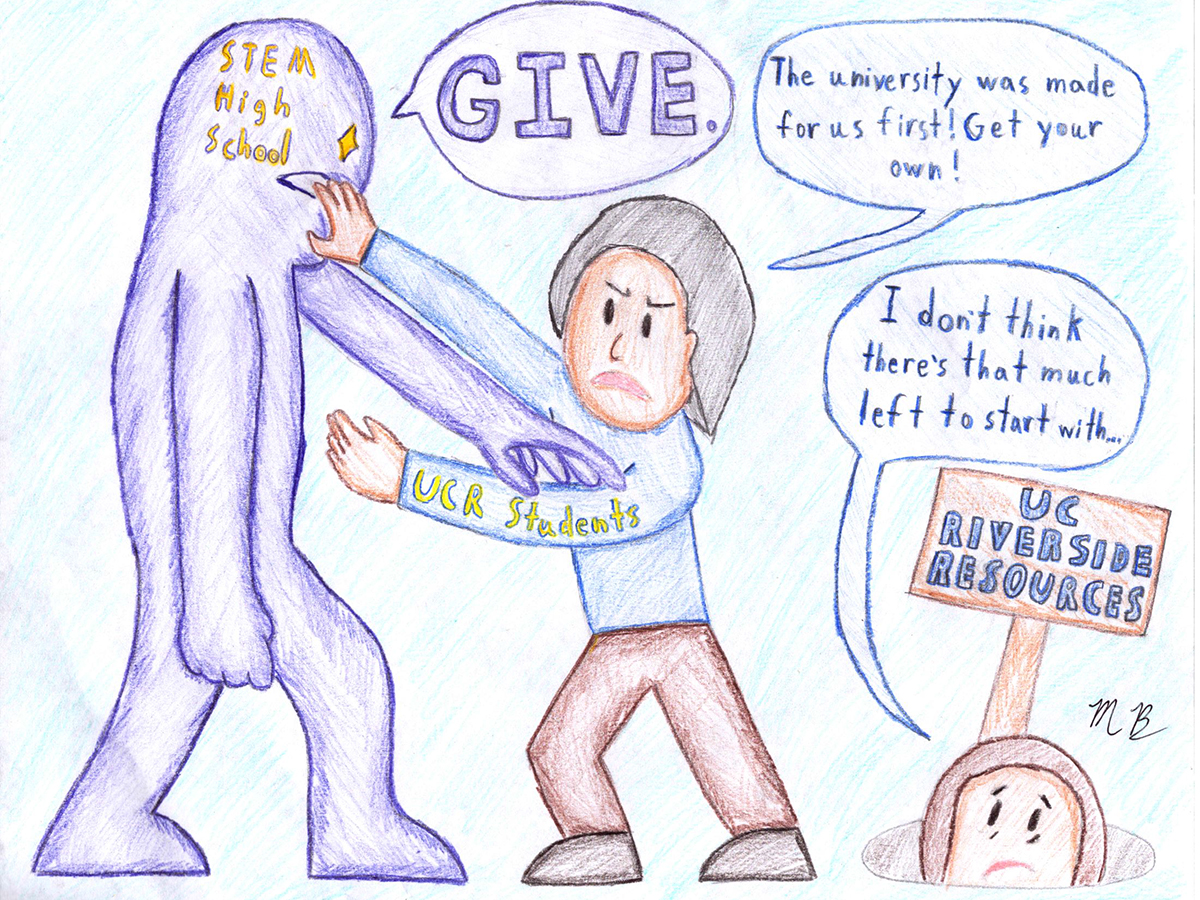 The UCR Academic Senate recently released a summary of a draft agreement reached between UCR, Riverside Unified School District and the City of Riverside that has committed to construct a Science, Technology, Engineering and Mathematics (STEM) magnet high school on the Northeastern part of UCR’s campus that will share a number of resources with the university, including faculty mentoring and, potentially, lab space. The planned high school is designed to bring wide benefits to both UCR and the surrounding Riverside community, according to the draft agreement. The construction of the high school, which is slated to begin in 2019, shows real promise as a mutually beneficial arrangement; however, the university has a responsibility to demonstrate a serious commitment to mitigating the accompanying challenges such a high school is sure to bring.

Funding for the design and construction of the high school, totaling approximately $55 million, comes entirely from Measure O, a $392 million bond approved by RUSD voters to build and improve schools in RUSD, which was approved in 2016. After beginning in December of 2019, construction is planned to finish in March of 2022, with the school projected to open that summer. The site of the school, chosen from a number of other options, will be located on Valencia Hill Road and Watkins Drive, in the current location of the intramural sports and recreational fields just to the north of the Glen Mor apartments.

UCR and RUSD staff have emphatically touted the project’s benefits, like the school’s potential to serve as an on-campus site for service learning projects for UCR undergraduate students. Another key benefit includes the value of enrolling 800-1200 high school students from Riverside in a highly resourced and well-designed high school aimed at preparing them for focused, high-impact careers in STEM fields, is excellent news for the community. The news should be welcomed on the merits of what is shown on the surface–pragmatic investments in education, especially at the earlier levels, pay off in large dividends to their communities. These dividends take the form of highly educated workers that increase productivity and economic activity.

While it’s obvious many graduates of the high school will go on to live in parts of the world not in Riverside, evidence shows that many are expected to remain in Riverside or move back after completing their education. The benefits of their STEM-focused education would feed back into Riverside, meaning more workers available to fill highly-skilled well paying jobs that increase economic activity and the size of the city’s tax base.

Furthermore, the operation of a prestigious STEM high school with access to UC resources and facilities is sure to put Riverside on the map for parents looking to raise a family. School quality has been consistently shown to be one of the most important factors in determining the price of real estate, and given the ballooning cost of living in the coastal regions of Southern California, good schools such as this might be just the extra motivation prospective parents need to settle down further inland. This potential rise in the attractiveness of Riverside’s housing market would bring serious benefits to the area, as residents would see the values of their homes rise and new movers would bring more wealth into the economy.

The branch of UCR that stands to reap the widest benefits from the partnership is the UCR School of Education. Having an affiliated high school right on campus would undeniably enrich and deepen the quality of instruction available to education students; they could shadow certified teachers, teach classes of their own, allow for more direct study of educational practices and even serve as a laboratory for testing best practices in pedagogy. As noted in the draft agreement: “It is the optimal site for education students and student teachers and the proximity is key for facilitating interactions, including possible professional development program[s] for teachers.”

The new STEM high school undeniably fulfills the mission of UCR’s 2020 Strategic Plan, which calls for the university to “foster academically-focused partnerships that benefit the university and community.” The advantages posed by the partnership between RUSD, the City of Riverside and UCR are wide and clear; however, the construction of the high school and its integration into the UCR community does not come without challenges.

The first concern of parking would certainly be the most troubling, given the campus’s embarrassingly insufficient number of parking spaces; however, the draft agreement states that “There are no plans to allow RUSD to park on UC Riverside property, surface lots, or parking structures,” meaning that the actual impact of parking concerns will be minimal provided nothing changes.

RUSD students could contribute to overcrowding of UCR dining options if they end up spending a significant amount of time actually on campus, but the amount of time the students will spend on UCR’s campus is currently unknown. The high school will have its own dining services just like any high school in the area, but its students will have full access to the UCR campus and facilities (including food services), just as any member of the public does by virtue of UCR being a public institution. In other words, while the RUSD students have no privileged status over any other citizen of Riverside in accessing UCR dining, their constant close proximity to the campus, in addition to the partnership between the two institutions, may entice them to regularly come to UCR for dining options.

The question of whether students at the high school will be allowed to leave the campus during lunch or other school hours, which certainly puts UCR dining at greater risk of overcrowding during these times, is currently not known, according to the draft agreement. UCR dining facilities like the HUB are overcrowded already and face a severe shortage of suitable tables for students looking to eat, especially during lunch hours. The fact that UCR has not yet answered the question of whether or not students from the high school will be frequently coming to UCR’s campus for dining services is less than assuring. Ideally, the high school students would not be allowed to leave their campus during lunch hours, but more importantly, UCR should take further steps to assure the student community that its dining services will not be overcrowded.

Opportunities for the high school’s students to meet, do research with and be mentored by UCR faculty are undeniably fantastic opportunities, but are strange priorities given that many of these resources are sparsely distributed among many UCR students who frequently get no faculty facetime past their 150-160 minutes of lecture each week, which can hardly be characterized as interaction. The same principle applies to potential grant funding available to the high school’s students.

The single greatest risk the high school poses to the smooth running of UCR campus operations however, is the quintessentially Southern California problem of traffic. The draft agreement indicates “UC Riverside’s position is that RUSD vehicular traffic will not be allowed along Linden,” and that “all RUSD traffic must ingress and egress from Watkins.” While this is reassuring, the University has not as of yet released any other significant information regarding plans for UCR-specific traffic mitigation. Instead, the agreement states RUSD will solve any significant traffic impacts and mitigations with the City of Riverside.

Prohibiting RUSD vehicular traffic from Linden is a critical step that UCR has thankfully taken; however such a position is not only difficult to enforce, but still leaves a large number of other traffic concerns unresolved. RUSD vehicular traffic will undoubtedly lead to congestion of all its nearby streets, which are shared by the University, especially when students begin and end their classes, presumably at 8 a.m. and 3 p.m. Effective traffic mitigation solutions will undoubtedly prove the most difficult challenge UCR will have to address, and given the university’s current track record on the related issues of parking spaces and general accomodation for the rapidly growing number of students in recent years, there is cause to doubt traffic concerns will be addressed to the extent which is necessary.

Another issue that the draft agreement appears to have overlooked is the close proximity of the high school to UCR’s Glen Mor student apartments and residence halls. The proximity increases the likelihood of the high school students being exposed to more adult elements of college culture, including alcohol, drugs and sexual activity. Although high schools are not free of those problems themselves, close proximity to UCR’s residences certainly risks exacerbating these problems. A few new and legally much more serious impacts that this mixing of cultures and age groups could bring are the possibility of adults providing alcohol to minors, underage sexual activity and sexual assault.

The benefits the new high school will bring to UCR and the surrounding community are clearly too good to be left on the table. UCR, however, has a responsibility to its community to handle the negotiations in a serious, skeptical and cautious manner. The rapid growth of the university in recent years has undeniably been to the wide benefit of the entire community, but has not come without its own introduction of new challenges. The construction of this high school and its integration into UCR is no different, but hopefully this time UCR will look into the project’s associated challenges more seriously.