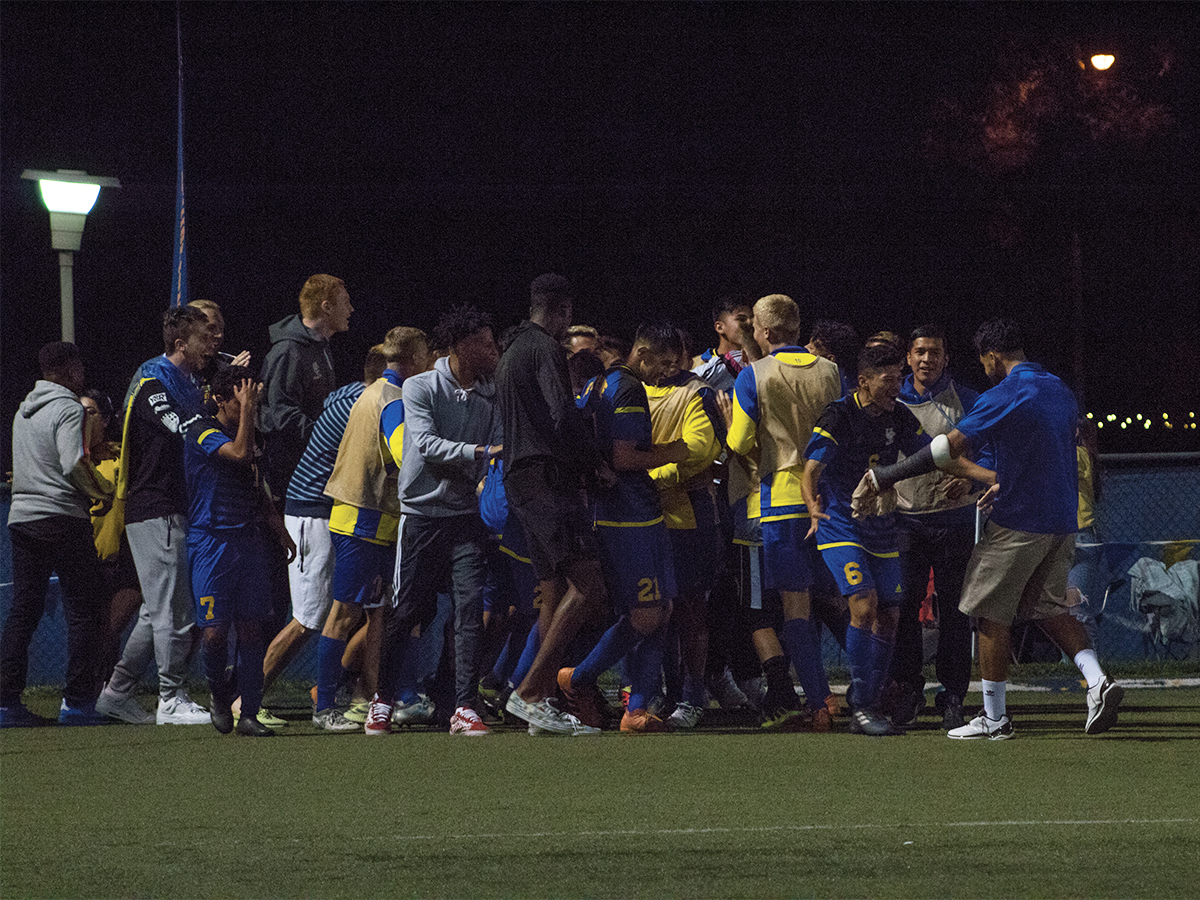 For the first time in program history, the UC Riverside men’s soccer team (7-9-2, 5-2-1) will appear in the Big West Conference Tournament final. The Highlanders knocked off defending champion Cal State Fullerton (7-5-9, 2-4-2) in dramatic fashion, edging the Titans 3-2 in overtime. These same two teams played each other last week and drew a tie, but with the stakes raised this time around, they both brought their A-game on Saturday night. This historic victory for the Highlanders also denies CSUF from reaching the championship round for the third year in a row, as the Titans have appeared in four of the last five tournament finals.

Both teams were aggressive right out of the gate, with CSUF and UCR attacking the opposition’s goal in the second and sixth minutes, respectively. The two teams remained scoreless throughout most of the first half, until sophomore midfielder Daniel Aguirre scored in the 45th minute, putting UCR on the board just before halftime. Aguirre rushed the left side with senior Antonio Lokossou, as Lokossou perfectly set up Aguirre for the Highlander’s first goal on the night.

The Highlander lead didn’t last very long heading into the second half, as CSUF’s Ross McPhie quickly responded with a goal off a corner kick nearly a minute into the second half. Then, in the 67th minute, Fullerton’s Carlos Escobedo placed a corner kick into the box where it would ricochet off of a UCR player and find the back of the net. The own-goal for Riverside gave the visiting team a 2-1 advantage, as it appeared that the Highlanders were letting the game slip away from their hands.

Despite the wild turn of events, the Highlanders stayed poised and aggressive for the remainder of regulation, waiting patiently for the right opportunity to strike. That opportunity came knocking on UCR’s door in the 80th minute as Fullerton’s goalkeeper, Paul-Andre Guerin, knocked over a Highlander player in the box, giving the home team a penalty kick.

Riverside chose to bring up senior defender Dusan Keca for the opportunity, with a chance to tie the game and send it into overtime. Keca came through in the clutch, scoring his fourth goal of the season and keeping his team alive with a score of 2-2 into extra time.

UC Riverside’s historical victory came in the 99th minute, as Lokossou notched his second assist on the night, setting up freshman Daniel Castaneda for a golden goal into the bottom right corner.

The team has flipped the script, winning seven of their last 10 matches after a rough 0-7-1 start to the season. Now, the Highlanders stand one win away from an incredible season turnaround, as they’ll host UC Davis in the championship round Saturday, Nov. 10 at 7 p.m.