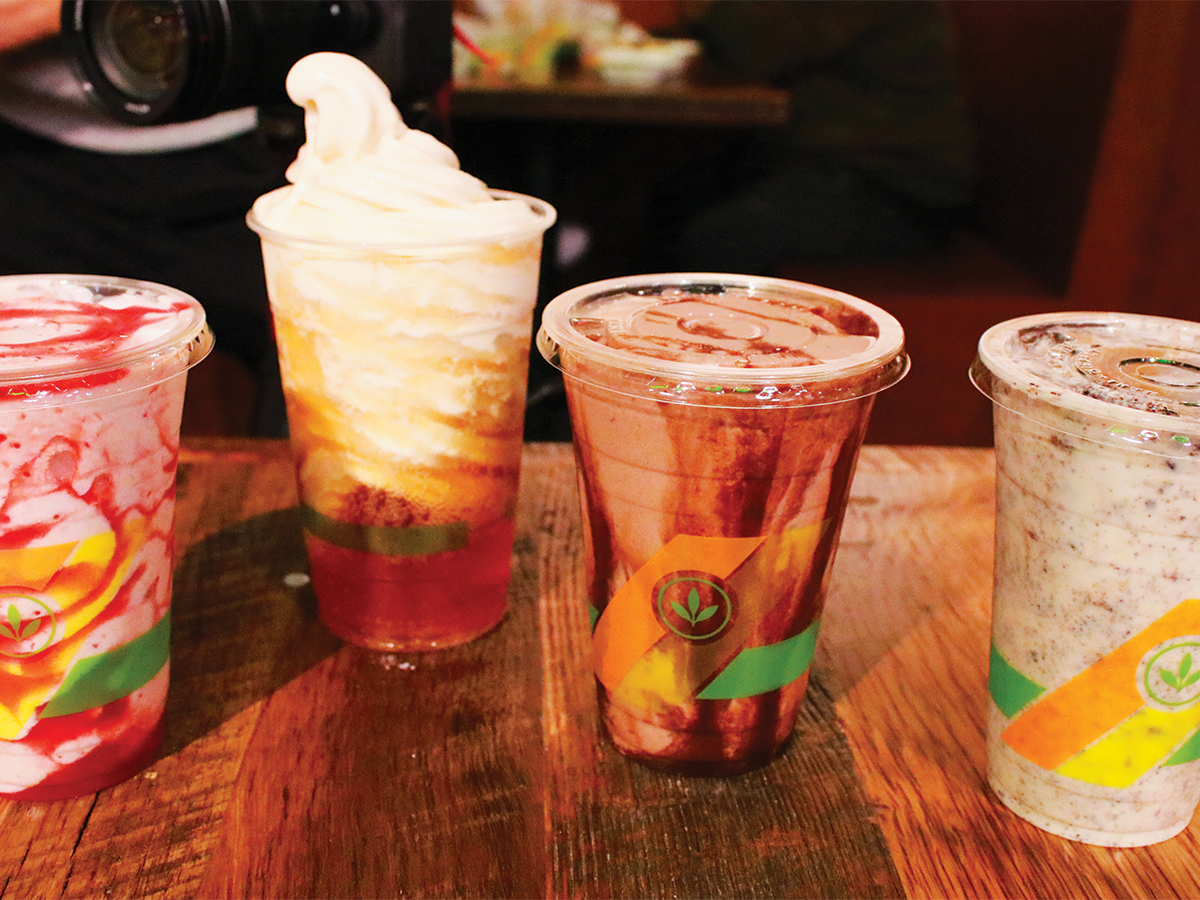 Vegan food — those two words conjure up an image of salads in the minds of most people when they hear or see them, but Plant Power Fast Food (PPFF) is changing the way that vegan food is seen. Plant Power Fast Food is a vegan restaurant chain that is expanding in Southern California, with their latest location being in Redlands. It’s one of the few vegan eateries in the Inland Empire, and offers food similar to everyday fast food items such as burgers, chicken nuggets, shakes, animal fries and cheesecake — of course, without animal products. PPFF’s goal is to shift fast food toward plant-based ingredients. This sounds far-fetched and outlandish, but, judging from PPFF’s offerings, is very possible.

The ambience of PPFF is peaceful and upbeat. The postmodern decor is easy on the eyes and offers a cafe comfort that most restaurants try hard to replicate. The wall of house plants empathizes its “green” message in a homey, comforting way. Soothing music adds to the atmosphere, and offers a comfortable space to study, chat with friends or even go on a date.

The typical for veggie burgers tend to focus on corn, broccoli and black beans to create burger-like patties but can’t identify as burgers such as the Habit’s veggie burger. However, PPFF’s signature vegan burger, the Big Zac, is an imitation of the Big Mac and frankly doesn’t taste any different from its beef counterpart, with the same meaty taste and texture. It’s made in-house (made in the restaurant) and is composed of non-GMO soy. The burger is stacked and has the same three bun structure as the Big Mac. The bread has a sweet taste and makes an obvious presence throughout the burger, but compliments the more savory flavors well. The secret sauce, the pickles, the meat-style patty and the creamy vegan cheese create a really convincing veggie burger that can satisfy the pickiest of carnivores. The most impressive component is the vegan cheese which is creamy and melty and doesn’t taste like plastic as some vegan cheeses can taste. Although the Big Zac is the most expensive in their range of burgers which tend to be between $5-9, it is really filling for what it’s hefty price tag.

The sides tend to be very standard for most fast-food fare such as fries and side salads, and we tested out the Voodoo fries. The consensus on the fries was that they tend to be a nice, hardy, filling take on In-N-Out’s classic animal fries. Less soggy than typical loaded fries offerings, the Voodoo fries are topped with caramelized onions, secret sauce and ‘cheese’ sauce. They’re served in a compostable food container and are great on the go. Priced at just under $5, Voodoo fries are a delicious and affordable option in comparison to most vegan restaurants that tend to charge $8 for their sides.

For those who prefer chicken instead of burgers or fries, there are also soy-based ‘chicken’ tenders with a range of sauces. The “chicken” tenders are nice and crispy on the outside and tender inside. The batter is very savory and, although the tenders are delicious enough that you can eat them without the sauce, PPFF’s “honey” mustard features a satisfying and complex flavor. It’s sweet and creamy with a slight tangy taste from the mustard and is not gritty like most honey mustards. The price range for the ‘chicken’ tenders is $5-9, depending the size of the order (PPFF offers three-piece, five-piece, eight-piece, or 16-piece tenders).

Dessert-wise, PPFF does not disappoint. Initially, we taste tested all of the shakes on the menu and the Kombucha Floats. The classic milkshakes flavors are chocolate, vanilla and cookies and cream, and although the milkshakes have an overpowering vanilla taste, they still are refreshing and are an overall solid offering. The chocolate shake is creamy and has the comforting taste of milk chocolate with the mix of the vanilla flavor that is very present. The strawberry milkshake has real strawberries in the shake and when mixed, tastes as creamy as a strawberry cheesecake. Finally, the cookies and cream shake has the crunchy texture of the chocolate cookies only for the first few sips but throughout the shake, the cookie texture tends to be softer. All the shakes tend to have a slight soy aftertaste, although this doesn’t detract from the satisfying flavors and refreshing feel.

The piece de resistance is the Kombucha Float, a unique take on the very traditional and somewhat forgotten food fad of Root-beer Floats. Kombucha is typically known for its somewhat sour taste and the combination of the soy-based soft-serve really highlights the drink’s subtle sweetness. At some length it even is reminiscent of a creamsicle. If you are unimpressed by any of the food offerings, I would definitely recommend PPFF for their Kombucha Float alone.

PPFF’s creative take on many fast food favorites and welcoming atmosphere are sure indicators that vegan food is here to stay. Their menu is definitely worth the trip and can even convince the most passionately carnivorous person to consider reducing the amount of meat or animal products they consume.