Highlander
Home Features “Rise up as one”: PODER’s Coming Out of the Shadows raises awareness... 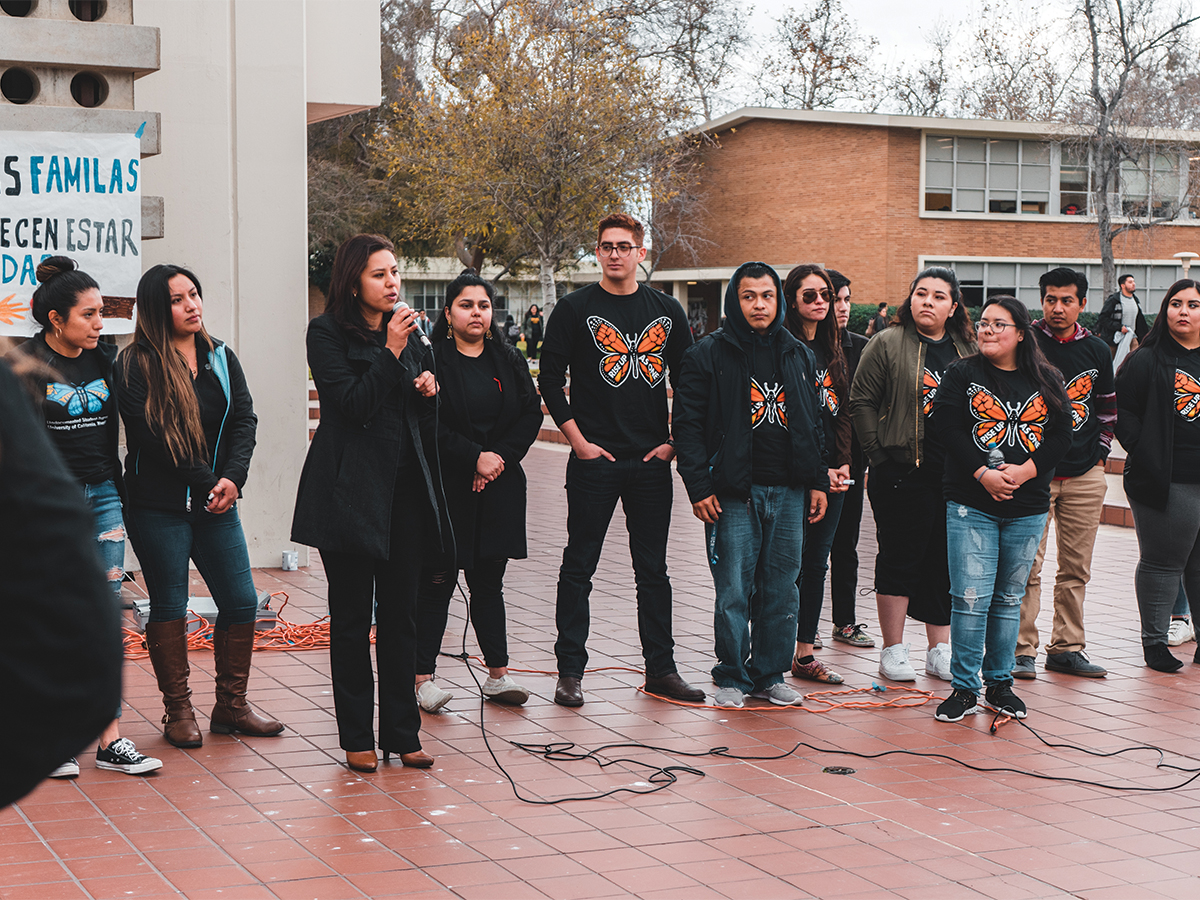 Monarch butterflies are known to migrate up to 3,000 miles throughout Canada to Central Mexico. Their symbolism of migration has been used by many immigration rights movements, including PODER’s Coming Out of the Shadows event at the Bell Tower. On Wednesday, Feb. 20, a monarch butterfly with the phrase “rise up as one” adorned the shirts of PODER members as they shared their stories and experiences as undocumented students.

Since 2008, student-led organization PODER’s (Providing Opportunities, Dreams and Education in Riverside) mission has have been to advocate for undocumented students in the Inland Empire. In addition, they also host Immigrant Awareness Week each winter quarter to bring awareness to issues within the undocumented community. One of the programs taking place is the nationwide event Coming Out of the Shadows.

Coming Out of the Shadows first started in March 2010 in Chicago, Illinois when undocumented people gathered at the Federal Plaza and declared their status as undocumented and unafraid in front of the federal office building. “Coming Out of the Shadows not only exposes the experiences and adversities of what it means to be undocumented. It brings attention to the need for the humane, comprehensive immigration reform,” said Wendy Guzman, a third-year education major and one of the co-presidents of PODER.

Brenda Huerta, a fourth-year English and Spanish double major, arrived in the U.S. with her mother when she was 12 years old. Recently, Huerta’s mother suffered a life-threatening condition that almost took her life. Huerta’s mother does not have access to health care due to her status and could not afford to pay the costs out-of-pocket. Huerta’s experiences with the difficulties of having undocumented status have led her to urge people to become engaged with politics and vote in the elections.

For fourth-year transfer and public policy major Katia Mejia, being undocumented had its own difficulties. Her mother wanted to take her back to Mexico after Mejia graduated high school, yet, Mejia chose to stay in the U.S. to pursue a college degree and the American dream. Mejia, however, did not qualify for DACA, and faced difficulties in entering higher education. “It felt like the doors closed on me,” she explained. Regardless, she went to community college and a counselor encouraged her to apply to UCR.

Among the PODER members sharing their stories was second-year Spanish major Tania Gonzalez. “I didn’t know what my status meant until eighth grade,” said Gonzalez. “I was tutoring another student, and he said ‘why are you even trying if you are not even going to college.” From that moment, Gonzalez found and applied for DACA (Deferred Action for Childhood Arrivals) on her own since her peers and counselors were unsure about the process.

When he arrived in the U.S. as a child, Carlos Alarcon, a second-year business major, would often be told “learn English as fast as you can, don’t tell anybody how you got here, and don’t tell anybody where you’re from.” He further explained that not all undocumented youth are eligible to apply for AB 540 or DACA. “Some of us don’t qualify (for) AB 540 and don’t qualify for DACA. That can really affect someone mentally, working hard all your life, and then being told ‘no, you can’t do it just because you’re born over there.’”

Karina Gutierrez, UCR’s resident immigration attorney, spoke at the event on the importance for people to become engaged with their local politics as a responsibility to those who can’t vote in the undocumented community. Gutierrez, herself a UCR alumna and DACA recipient, shared that DACA was not implemented until she began law school. Being undocumented and a DACA recipient motivated Gutierrez to advocate for others like her. “At the end of the day, I don’t forget (that) I am undocumented,” said Gutierrez. “I am proud to be undocumented. I will continue to use my voice to advocate for myself and those around me, and I hope we all do that moving forward.”

Anyone interested in PODER, they can be reached at poderatucr@gmail.com. PODER meets every Tuesday at 5 p.m. in HUB 260.