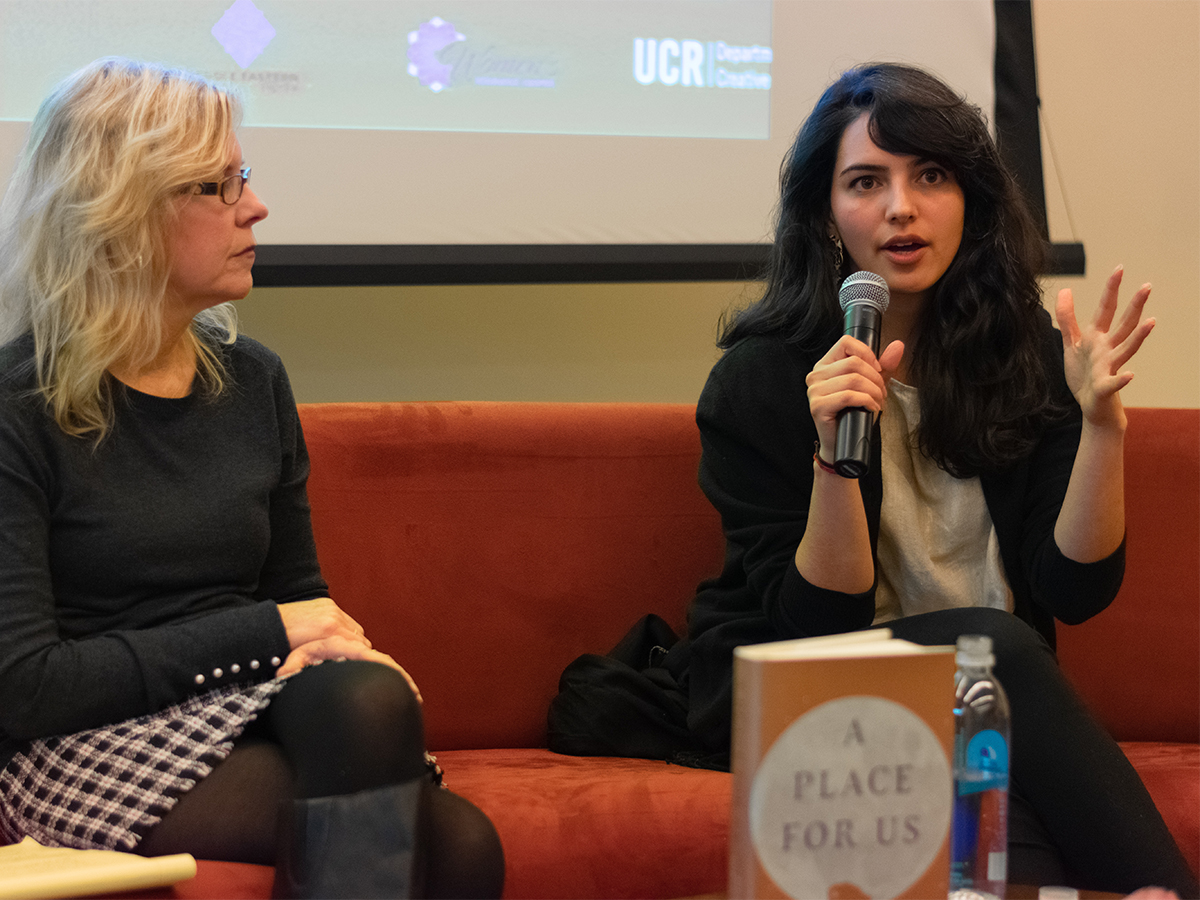 When Fatima Mirza first stepped onto UCR’s campus as a freshman, she was convinced that she would fulfill her family’s dreams, pursue a pre-med program and become a doctor. After an inspiring experience in an elective writing class uncovered her passion for literature, Mirza decided to follow her dream and now finds herself a decorated and successful novelist.

Mirza, author of the New York Times best-seller “A Place for Us,” returned to UCR’s campus on Wednesday, Feb. 21 for a brief conversation at 3 p.m. and a subsequent Reading and Discussion at 5 p.m. as part of the Sixth Annual Creative Writing Reading Series. The event was sponsored by the Middle Eastern Student Center (MESC), the Department of Creative Writing, the Women’s Resource Center and HUB Programs and moderated by Professor of Creative Writing Susan Straight.

After a brief introduction by MESC Program Coordinator Ali Saadat, Straight and Mirza began their discussion. The audience, consisting mainly of creative writing majors, intently followed Mirza’s story, from budding chemistry major with an eye on medical school to a talented, published author.

Mirza explained that “it’s really strange to come back here, where it all began. I wrote the first sentence in the fourth floor of INTS, and so I just wanted to begin by saying thank you (UCR).” Having promised her father to become a doctor if he let her move away for college, Mirza began her writing career by taking various creative writing classes simply as a hobby. Her breakthrough came in an intermediate fiction workshop taught by professor Charmaine Craig.

“I got this writing prompt that day, and it was the first time that I wrote a character, whose name was Hadia,” said Mirza. “I hesitated, for a few reasons: one, that was the first time that I had ever thought to write a character who could’ve been me, could’ve been my sister. At some level, although I love writing, I feel like I had been mimicking the books that had been assigned to me.” Mirza felt more comfortable and compelled “writing a character that could have been my cousins, or me, someone whose journey was closer to my own.”

Despite her initial hesitation, Mirza’s emphasis on South Asian Muslims, like herself, soon became a cornerstone of her writing. “Every week, Charmaine (Craig) was presenting different writing prompts, and I found that I was returning to different members in that same family, through different perspectives,” Mirza said. “The more that I was writing about (them), the more I started to feel that I loved them, that I wanted to understand them. I started to feel that this was more important than me, my wants or my needs in terms of honoring this promise that I had made to my father.”

Incorporating South Asian characters and exploring the immigrant experience in America became the focus of Mirza’s project. Mirza noted that, especially in the post-9/11 world that marked her generation and resulted in mistrust of Muslim Americans, it was important to her to increase representation and portray Muslims as “complex” characters with the same concerns, feelings and lives as other Americans.

She soon decided to take her writing more seriously, and recalled the moment that she changed her course. Mirza had been called into office hours by Craig, where Craig said, “Let’s discuss your future in fiction writing.” Mirza recalled that, “up until that point, every conversation with my dad had been, ‘this is your future’. My response had been, ‘OK, how do we make that my future.’ This was the first time that somebody said, ‘let’s discuss your future,’ as if it was a discussion.”

Mirza decided that the only option was to pursue writing full-time. “I remember calling my dad crying and telling him I was dropping out of pre-med,” she said.

Mirza’s path soon led her to the University of Iowa’s graduate Iowa Writers’ Workshop program (the first UCR graduate to do so), where she had the chance to cultivate her interests and hone her skills in an environment geared towards her goals. Graduate school gave her the support network to work on her writing and, importantly, offered her the opportunity to meet with publishers and other industry professionals looking to sign the next big writing talent.

The regular meetings with publishers offered by the program, however, went unused by Mirza. She emphasized that, during her time there, she “kept her head down and tried to finish the book.” Her refusal to meet with agents, despite strong urging from her mentors, stemmed from her convictions about creativity.

Mirza and Straight explained that the publishing process was fundamentally the opposite of the creative process; rather than patiently waiting for and cultivating story ideas and characters, publishing was about quickly creating a work, printing it and marketing it to a wider audience. Mirza felt as though she had to keep the process separate for as long as possible.

Initially, Mirza gave herself 10 years (from age 18) to finish the novel. In year seven, the election of President Donald Trump and his controversial rhetoric about Muslims signalled the point of no return for her: the book would be published within the next year. After eight years in development, “A Place for Us” became Mirza’s debut novel, and the first title under “Sex and the City” star Sarah Jessica Parker’s new imprint, SJP for Hogarth.

“A Place for Us” garnered Mirza widespread acclaim, and shot to the the top of the New York Times Best-sellers list. Despite the positive critical reception, however, she recalled the feedback that gave her the most satisfaction. When her family finally read the piece, their reactions were priceless. Mirza’s brother called her crying, touched by the way “his sister’s soul was in the book.” More significantly, Mirza’s parents, pressured by cultural norms which traditionally didn’t look favorably on outspoken women, expressed pride at their daughter’s accomplishments. Mirza recalled that her father reassured her that they had always been proud of her; the respectful nature of her work in regards to her culture and faith, however, meant that they felt comfortable celebrating her in a lavish ceremony within her community.

“(UCR) was such an amazing time to figure out who I was, it was such a transformative four years,” Mirza said, adding, “If I could go back, I would make myself take more classes, hang out with my friends a little bit longer, go to more office hours because when you look back, it is that time that you are really becoming who you are … the amazing thing about UCR was that it’s so receptive to that want.”

In an interview with the Highlander, where Mirza worked as a features writer and editor during her undergraduate years, she commented on the invaluable inspiration and support UCR offered. “(UCR) was such an amazing time to figure out who I was, it was such a transformative four years,” Mirza said, adding, “If I could go back, I would make myself take more classes, hang out with my friends a little bit longer, go to more office hours because when you look back, it is that time that you are really becoming who you are … the amazing thing about UCR was that it’s so receptive to that want.”

Mirza offered advice for students: “Really take advantage of the years that you are here because everything is designed to service your education.” She added, “Maybe a class doesn’t fit your requirements … take that class, even if it’s more work. Try your best to design your courses around your interests.” Finally, Mirza advises students, “Go to office hours of the classes that you’re interested in, because so much of the learning happens outside of the classroom. Talk to (the professors) about what you loved, and you’ll have more that you’ll be learning on your own. This is your time to learn, and grow and become who you want to be, and that is just such a privilege.”

Mirza concluded, “I will just say that I loved my time at UC Riverside. It isn’t just four years that exist while you’re there, it is such a crucial time and such a transformative time if you let it be. I’m just so fortunate that I could spend those four years there, and I don’t think I would have arrived at my book had I not been able to have that time to play and work and be curious about creative writing.”

Editor’s note: A previous version of this article stated that Mirza’s parents were hesitant to celebrate her work but changed their view due to its “the quality and magnitude”. In fact, her parents felt comfortable celebrating her work due to its respectful attitude towards her culture and faith.