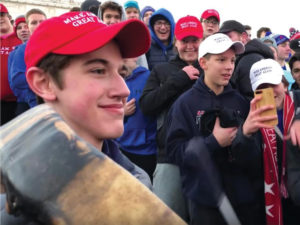 On Feb. 20, it was made public that the family of Nicholas Sandmann was suing The Washington Post for a hefty $250 million over the rhetoric the paper used to report an incident involving a viral video from the Jan. 18 March for Life Rally in Washington D.C. The video itself was making its rounds in the media, but the version that went viral was only a clip from a longer video that was later posted, showcasing that there was more to the initial story. In the shortened video, 16-year-old Nicholas Sandmann, a student at Covington Catholic High School in Kentucky, is seen smiling at Nathan Phillips, a Native American activist who was beating a drum and singing while standing in close proximity to Sandmann.

Many jumped to conclusions after viewing the video snippet and took to social media to express outrage based on the optics of the clip alone. The Sandmann family alleges that The Post slandered Sandmann in a series of seven stories and incited a narrative in favor of Phillips. Alongside the supposed one-sided reporting, Sandmann’s family also added that Nicholas, as a result of the fabricated narrative, became the target for cyberbullying. On March 1, The Washington Post staff issued a statement conceding that the news story they initially ran depicting the incident did have multiple unconfirmed accounts or contradictory statements.

Despite the fact that The Post has gone on the record to admit that they had run a story with unconfirmed statements, when taking a closer look at one of the articles published in relation to the incident at the Lincoln Memorial, the rhetoric used to depict the scene is still clearly editorialized. It isn’t news to claim that most media outlets do have, and have always had, an inherent bias, but the disappointing way The Post navigated this situation shines a light on the growing culture of unethical reporting.

A deconstruction of an article published by The Post on Jan. 22, reporting on the scene in the viral video, shows that The Post let personal bias hijack the neutrality of an article that was supposed to simply report an admittedly chaotic spectacle. To begin with, the faulty reporting and wording used to describe the boys from Covington Catholic High School imply that they were aggressors. Aside from already giving off the impression of Sandmann as a mischievous boy by detailing the “relentless smirk” he was wearing, the article only included testimony given by Phillips, and failed to collect any stories from the other two major groups that were present at the location at the time: the students from Covington Catholic High School and the antagonistic Black Hebrew Israelite activists who actually sparked the confrontation.

In addition to the fact that Phillips was the only one who was interviewed in the article, many of his statements were published without proper confirmation or were simply unnecessarily added in order to further emphasize a divide between Phillips and the Covington boys. The Post included statements from Phillips saying that he and other indigenous people were being taunted by the boys, despite the fact that no such thing was heard in the video, and an investigation later found that the students had not made any inflammatory statements towards Phillips, the indigenous people or the Black Hebrew Israelites. Immediately after reporting what Phillips said about feeling threatened by the presence of the Covington Catholic students, The Post then connected this incident to President Donald Trump’s mocking of Senator Elizabeth Warren’s Native American heritage, an unrelated incident that had nothing to do with the events at the Lincoln Memorial.

It seems rather clear that, intentional or not, there was a narrative played out in the article that sided with Phillips, especially due to the exclusion of testimonies from any other parties that were involved at the Lincoln Memorial. In the article, The Post also failed to mention the third party involved, the Black Hebrew Israelites, who were present at the scene and initially instigated the confrontation by yelling racist and homophobic profanities at the schoolboys. Such skewed reporting denigrates the boys, who, despite exhibiting some rowdy behavior, evidently did not harass Phillips in the way that he claimed. Because of this, Sandmann’s family is well within their rights to ask for compensation due to a mischaracterizing news report, which has led to widespread demonization of the teenager and threats of violence, social exclusion and even calls to deny him entry into universities.

Unfortunately, such incidents simply play into the anti-press narrative that has dominated political discourse in the last half decade. Prior to the extreme popularization of the “fake news” phenomenon, it isn’t far-fetched to say that President Trump would often utilize this phrase more as a technique to deflect negative attention off of himself and onto the media instead. For example, Trump went to call The New York Times “the enemy of the people” multiple times following the publication of an investigative report that was based off of confidential White House documents. What was published had basis in fact, but because it reflected negatively on President Trump, he found reason to decry it as false and attempted to degrade the media outlet.

However, it’s disappointing to say that given the growing hostility Trump has directed at the media, many news outlets have started to devolve and prove him right, such as in The Post’s case. There seems to be a sense of heightened immediacy nowadays with news sources scrambling to be the first to get a controversial story out, especially if it relates to Trump; in doing so, many news outlets are choosing to sacrifice the time that would usually be allotted for further investigation into the story or fact-checking. For instance, back in 2017, Buzzfeed News caught major backlash for choosing to publish an unconfirmed dossier gathered by a British intelligence agency. The editor-in-chief, Ben Smith, didn’t back down from choosing to publish such an explosive yet unconfirmed document because he stated that doing so could let “Americans … make up their own minds about allegations about the president-elect that have circulated at the highest levels of the US government.” It’s one thing to publish a factual document and leave it up for interpretation by the American people, but posting an unconfirmed report doesn’t even allow the American people to properly form their own opinion on something since it hasn’t been established as a fact yet.

Buzzfeed News also faced scrutiny after Special Counsel Robert Mueller denied a report that was published by the news source, claiming that Trump had instructed Michael Cohen to lie to Congress. It’s nonsensical to say that the sense of urgency to be the first to break a news story wasn’t always present in the media, because it has been, but there was a time when there was more integrity present in the scramble to publish a story.

Take the story of the Pentagon Papers, a 7,000 page document detailing the history of U.S. intervention in the Vietnam War and the decision-making process behind it. In 1971, Daniel Ellsberg, a former military analyst who became disillusioned with the war, was the one who gave the tip about these documents to Neil Sheehan, a reporter for The New York Times. Shortly after receiving the tip and the classified papers, Sheehan set up a team to comb through the entire 2.5 million word report in order to ensure that their story accurately lined up with what was said in the papers. There was obviously a sense of urgency to get a story out, but there was still intensive care in properly preparing and investigating the story.

Exploiting stories such as the Lincoln Memorial incident by focusing on “clickbait” topics and narratives is contributing to the devolution of modern-day journalism, and it’s unclear as to what it will take for most media outlets to regain the lost trust. The growth of social media has definitely contributed to this phenomenon given the quick access most people have to this platform in particular. Social media is starting to become a shortcut to getting information – about two-thirds of American adults say that they have turned to social media as a tool to get news despite being unsure about whether what they’re reading is accurate or not.

In addition to the growing influence of social media as a news source, newspapers are a declining business; despite some growths in subscriptions to newspapers, revenue has fallen in general for the industry. And perhaps because newspapers are on a decline, outlets have chosen to stoop to creating scandalous headlines and generating controversial stories despite having little basis in fact in order to gain profit, but there then enters an issue pertaining to the morality of this practice, as this will eventually only fuel more distrust within the industry of the media. It’s partly up to the American people to know how to distinguish between reports that may come across as overly editorialized and articles that more closely reflect reality.

Despite the antagonistic nature of this costly lawsuit, it still was able to bring much-needed attention to the disparities in media today. There is no particular side to blame, as both right- and left-leaning sources seemed to have shifted more in favor towards their ideological bias. Perhaps it might take a new president to quell the growing prominence of bias in the media, since the incumbent does highlight some of the issues in the media, but goes about it in the wrong way. Reverting media outlets back to a time of only subtle biases might still be a doubtful goal considering the growth of social media and “clickbait culture,” but whatever happens next, it’s important for the American people to remain skeptical and understand that perhaps everything isn’t as one-sided as it seems to be.