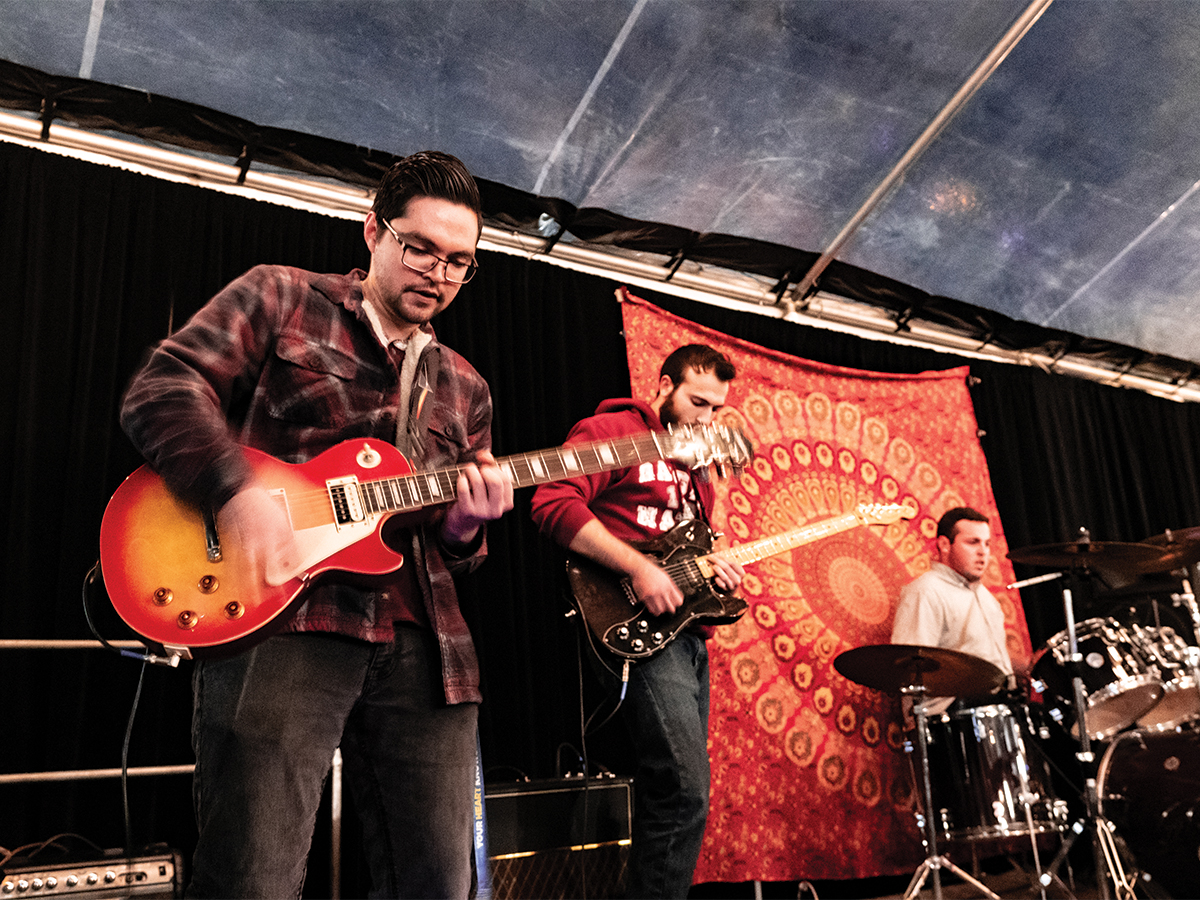 The aroma of tacos from Ojo de Agua and the sound of drums filled the air of a Thursday night as five bands competed for a spot on the 2019 Spring Nooners line up and a prize of $200. The competition known as SoundClash was held on Feb. 28. A large canopy that covered the stage was set up on the HUB Plaza where the competition would take place. In front of the stage was a dance floor. After attendees grabbed tacos or shirts, they filled up the tables of the plaza eagerly waiting to hear the bands perform.

The panel of judges consisted of CARE Student Program Coordinator Nayaab Kazzmi, the Leadership Programs and Service Coordinator Gerry Medina and Budget Personnel and Program Assistant Donna Dunn. Each band’s performance was rated based on their presentation, balance, originality, organization and crowd interaction.

The first band of the night was Delfino^2 whose alternative sound and energetic performance livened up the crowd. The crowd in the dance floor danced along to the music that even made people outside by the tables dance in their seats.

Solo musician G. Bautista followed the band with a music style that was reminiscent of contemporary R&B. “Who wants me to sing to them?” G. Bautista asked the crowd before he began his last song. To end his set, G. Bautista brought one random audience member to the stage and sung to them one of his original songs.

The last band of the night and winner of 2019 SoundClash were alternative indie band King’s Prophet, who encouraged the crowd to dance to warm up from the cold. For the last song, the lead singer and guitarist, Calvin Anderson, went into the crowd to play which garnered attention from the crowd.

King’s Prophet is composed of Anderson, CSU Fullerton student and bassist Anthony Shih, UCI student and guitarist Josh Brazil, Fullerton student and drummer Collin Campell and UCR fourth-year pre-business major, guitarist and keyboarder Alejandro Torres. The band members first heard about SoundClash from Torres. Previously, the band had played at House of Blues and other places in San Diego and Los Angeles. This has been the largest crowd the band performed for yet.

Traditionally, SoundClash has been held at the Barn, but due to renovations, the event was moved to the HUB Plaza. SoundClash originated out of wanting to get the student body involved with events and to showcase the talent of UCR students.

King’s Prophet’s EP “No Strings” can be streamed on Apple Music and Spotify. The band will play during the first Wednesday of Spring Quarter, on April 3.