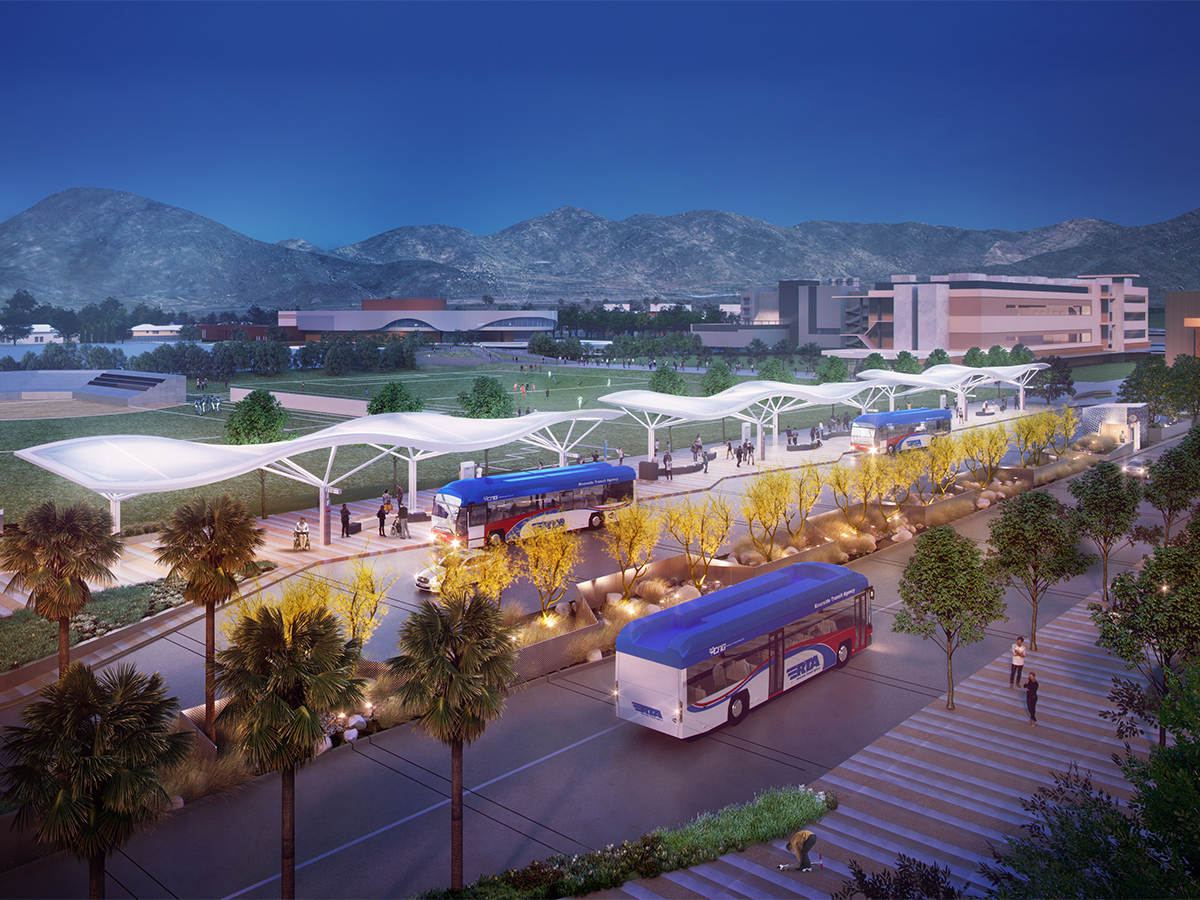 This spring quarter, the “UCR Mobility Hub and Central Campus Linkages” project will break ground in the construction of a transit center dedicated for UCR commuters and RTA bus lines in an effort to establish a new dedicated alternative transportation area to the UCR campus.

In interviews with the Highlander, Principal Architect Andrew Hecht, Project Manager John Franklin and the Mobility Hub’s Senior Project Manager Gerald Caraig all give updates on the key aims of the project and major development milestones to reveal an on-schedule completion in March 2020. The team also shared the latest renditions of the completed product with the Highlander, featuring color-changing canopies, kiosks and ample vegetation where Lot 19 sits today.

According to a description by UCR’s Architects and Engineers group, the Mobility Hub project “includes a centralized multi-modal bus transit center, a new front door to campus, and critical pedestrian-oriented, safe, and accessible connections from the Mobility Hub to the existing campus core.” Hecht explained that, “The Mobility Hub kind of already pre-exists on campus.” The principal architect references the bus space which sits in front of the Bannockburn student apartments on Canyon Crest drive. Hecht went on to explain, “It’s not in a good spot,” and that “moving it over to the Lot 19 area solves a lot of problems.”

The team stated that the three primary problems the Mobility Hub would address were the lack of an entryway to campus, safety and accessibility of alternative transportation, and the delivery systems to the Highlander Union Building and dining areas.

Regarding a “front porch” to the campus, Hecht stated, “one of the problems that the Chancellor identified early on is that there’s really no set place for a sense of an arrival when you come to UCR, there’s no gateway … this is going to create a front door for the campus.” In order to make that front door, Hecht stated that it requires collaboration with “five government agencies,” which includes “UCR, the Federal Transit Authority, Riverside Transit Agency, City of Riverside, and Riverside County.” Hecht reports that they have “met essentially all of the milestones … We’ve all played together and got along great to deliver the project on time; we’re at budget.”

Caraig mirrored the sentiment, stating that “it’s quite amazing having those five entities and orchestrating everything and being on time. Right now we’re projecting an on-schedule project so we’re pretty excited.”

A key consideration put forward by Franklin was their attempt to convey that they do not want the rapid construction to inconvenience those who frequent the area; “Our concerns are the separation of the construction site with the students and faculty. What I mean by that is that to the contractor-and we’ve made this perfectly clear-we want separation and pathways for everybody because we have many sites.”

Hecht went on to deliberate the nature of the Mobility Hub itself, stating that “this is not a relocation of the bus transit center from downtown, this is a completely UCR-specific use.” Along with the exclusivity, he stated, “RTA is not adding any lines, so it’s just taking a use that was never planned for that grew – and creating a place for it.”

Caraig explained the final traffic plan for the intersection that will connect the hub with University Ave. and Canyon Crest Dr., stating that “the barriers that we see there now that direct traffic up toward Canyon Crest will be eliminated, so there will be a traffic signal right there.” Franklin assured that “a traffic study was done” in an effort to set the signals on a timer to prevent vehicle congestion. Caraig expects that the implementation of the U-turn design, updated intersection, and various docking zones at the hub will promote “more efficient flow of traffic both for pedestrians and for regular vehicle traffic.”

Another purpose of the Mobility Hub outside of commuter traffic is addressing an existing delivery and service vehicle issue: “One of the problems that the Mobility Hub is going to solve is that right now when we take deliveries to the core of campus, it’s very awkward – they have to go up Linden then down Aberdeen then down North Campus Drive and go over by Surge,” Hecht said, “they do this big windy route, they cross way too many paths of students.”

Franklin stated that, “as a refinement, this is also enhancing the ways that we deliver goods and all the support for the HUB, the food, and the campus needs.” With the addition of a designated service vehicle turnout from one corner of the hub, Hecht said, “in order to get deliveries into the core of campus they’ll just pull into the Mobility Hub and go straight in.”

The team reported a generally positive community response to the development stage thus far, in part because of the implications for increased use of alternative transportation: “I think that by providing a front door, and the visibility of it,” Caraig said, “it could encourage a certain percentage increase of ridership via alternative ways of getting onto campus.” In addition, Hecht adds, “It’s safer, it’s nicer, it’s cleaner and it’s more efficient,” with estimates that the RTA “spends half a million dollars each year in gas and wasted time with all the busses rounding the block.”

Describing some of the more visual features of the project, Caraig said that “the whole area will be beautified. We’ll have changing-color canopy lights and it’s going to be very inviting with lots of greenery and foliage.” He went on to affirm that the Mobility Hub should feel “like a park setting but with busses going in and out.” Referencing the new renditions which show the Mobility Hub within the campus framework, Hecht concluded that “this is going to be a jewel for our campus.”