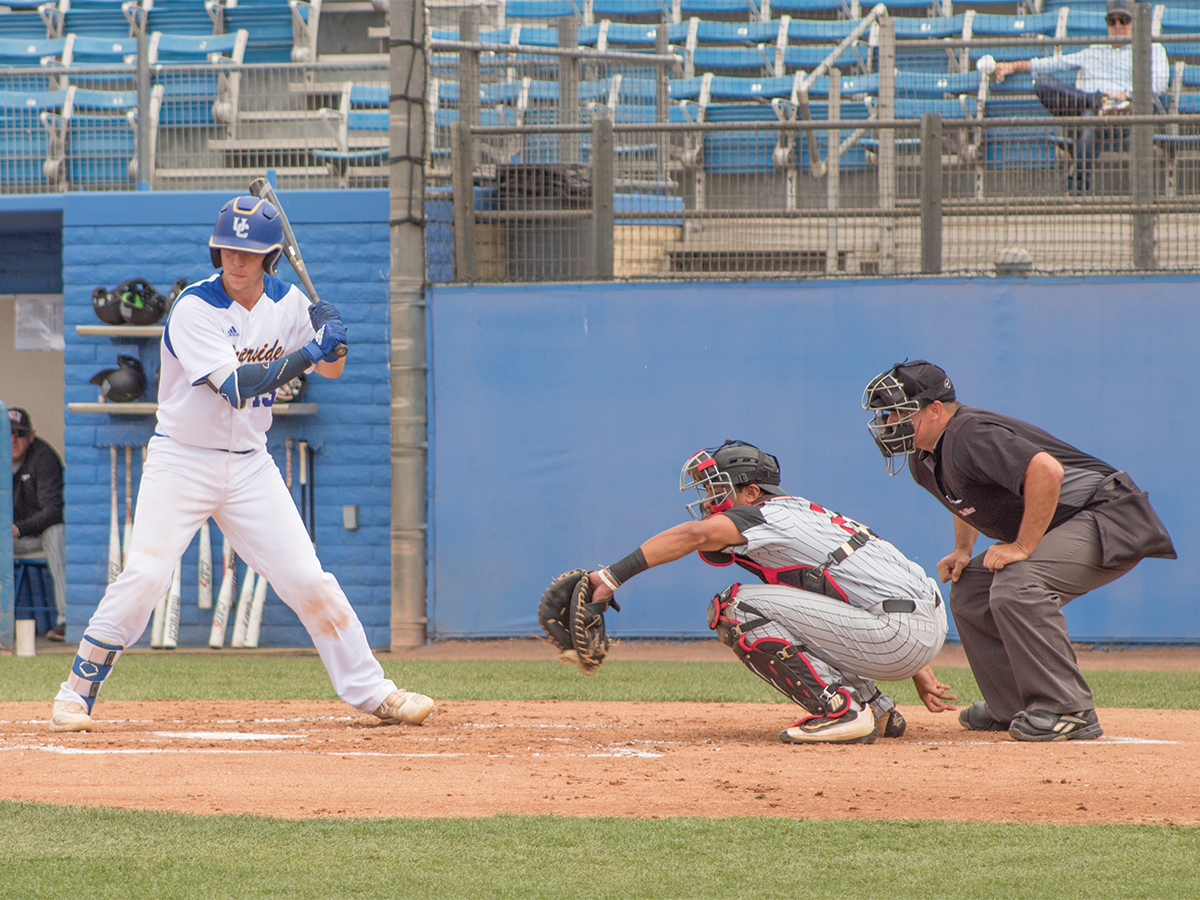 The Rebels had a big second inning, scoring five runs to take a huge lead. The biggest hit of the inning came from junior infielder Bryson Stott who hit a three-run homerun.

The Rebels added their last two runs of the game in the top of the sixth inning. The runs came off of RBI from a flyout from junior shortstop Trevor Rosenburg and a wild pitch from UCR that allowed freshman catcher Jacob Godman to cross the plate.

The Highlanders struck back in a big way in the bottom of the sixth, scoring six runs to take an 8-7 lead. Miller started the rally with an RBI-single that scored sophomore shortstop Nathan Webb. That was followed up with singles from sophomore left fielder Dylan Orick and senior pinch hitter Matt Hardy who drove in a combined three runs. Hardy would go on to score an unearned run because of an error committed by UNLV. UCR added three more runs in the bottom of the eighth to extend their lead and margin of victory over the Rebels.

Miller and Webb each accounted for two hits and two RBI apiece for Riverside. Junior pitcher Hayden Petrovick won his fifth game of the season despite giving up two earned runs and walking three batters in one inning of work.

UCR played again on Friday, May 3 against Long Beach State (10-34, 4-10). The Highlanders were unable to carry any sort of momentum from their win against UNLV, and lost to the 49ers 6-1.

Long Beach State (LBSU) gained control of the game early on, and never gave it up. The Dirtbags started the first inning by scoring two runs as a result of a groundout that allowed runners to advance and a fielders’ choice. LBSU added four more runs in the bottom of the fourth inning to take a 6-0 lead. A two-run single from LBSU designated hitter Chris Jimenez capped off the inning for the Dirtbags.

Riverside would score their only run of the game in the top of the eighth inning when Miller homered to center field.

Although the Highlanders only scored one run, the offense didn’t necessarily take a step back. UCR totaled one more hit than LBSU, but they failed to get timely hits to bring in runners who were on base. Riverside left 11 runners on base while Long Beach only left four.

Sophomore pitcher Jeremiah Priddy suffered his sixth loss of the season, allowing two hits and one earned run in two innings of work.

The Highlander baseball team will take on Cal State Fullerton at home on Friday, May 10 at 6 p.m.