On Wednesday, Oct. 2, ASUCR held their first meeting of the quarter. The meeting began with an official swearing in ceremony that all of the senators and executive cabinet members present participated in.

During public forum, Rich Davis, who identified himself as a Riverside resident, addressed the senate and spoke on the STEM high school that is being built on campus. Davis expressed his concern about the building of the STEM high school on UCR grounds. Davis stated, “ASUCR has been really eloquent in their opposition to the STEM high school and I want to encourage you to continue to oppose it this year … the school is going to create too much traffic.”

During the Legislative Review Committee report, ASUCR approved SB-F-19-004, SB-F19-005, SB-F19,006, SB-F19-007 and SB-F19-008 which was presented by President Pro Tempore Preeti Juturu. Juturu stated that all five of these bills were created when Gabe Pineda, a second-year double major in theater, film, and digital production and gender and sexuality studies expressed concern with the fact that the ASUCR’s terminology is not gender neutral. The bills revised gender binary terms in Chapters 5, 7, 13, 50 and 38 to include gender neutral terms. The motion to approve all five bills passed 18-0-0. 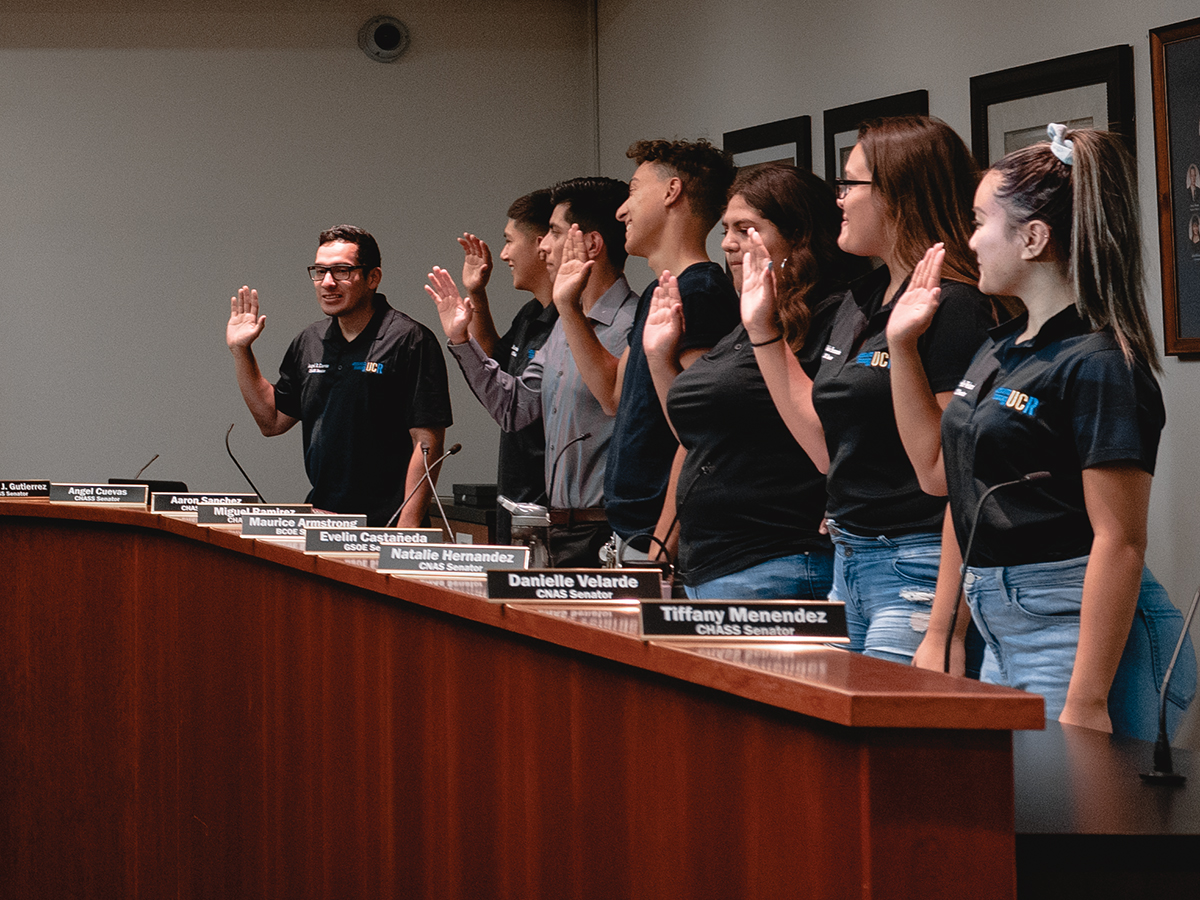 The meeting then moved on to the approval of the ASUCR Senate Chambers renovation as well as an ASUCR office remodel. Gonzalez stated that over the summer, the executive cabinet realized just how outdated the ASUCR Senate Chambers and the ASUCR office is. Gonzalez stated that for the senate chamber renovation, they are proposing microphone renovations, new projectors and the installation of a voting system that will track and keep a record of all the votes of each senator. For the office remodel, they are proposing new furniture, the creation of a senator’s lounge and new technology.

Laurie Sinclair, the ASUCR executive director, told The Highlander that $15,674.96 will be allocated for the new senate lounge, but the current senator space that is projected to have cubicles is a different quote. The quote for that space is $29,981.12. The quote for the technical upgrades to the senate chamber is $30,652.60. Sinclair noted, “These are all preliminary estimates, so the costs may be adjusted when the final designs are in.” The money to pay for the senate lounge, the new senator space and the upgrades to the senate chamber will be paid for by ASUCR reserve funds. During the meeting, Sinclair stated that ASUCR reserves can only be accessed for capital improvements or if ASUCR were to ever run out of funds and need to pay workers. Sinclair noted that money left over from ASUCR’s budget is allocated into the reserves.

President Pro Tempore Preeti Juturu expressed her disagreement with the remodel and renovation stating, “I think that just because past senators have expressed dislike of the current senator space does not mean that us current senators are displeased with the space. I think it would be best if we tabled the discussion until at least next quarter.”

Olenka Graham-Castaneda, the undergraduate sustainability director stated, “Renovations and remodels are the reason why the reserves exist, if we don’t do it, next year’s ASUCR will have to discuss it, nobody ever wants to do it. Big purchases are scary but they are necessary.” Sinclair also noted that ASUCR’s reserve money has almost rarely, if ever, been used. The motion to pass the senate chambers renovation passed 13-2-2. The motion to approve the office remodel passed 12-4-1. After the motion passed, President Gonzalez stated, “I don’t want you guys to think that we are just throwing money around. This is for us, we want to do this for us and the future. These renovations need to be done.”