On Oct. 23, ASUCR held their fourth meeting of the quarter.

Chancellor Kim Wilcox and Vice Chancellor of Student Affairs (VCSA) Brian Haynes addressed the concerns many students had regarding the proposed commencement changes that the Dean of Students Christine Mata and the Assistant Vice Chancellor of Alumni and Constituent Relations Jorge Ancona proposed during the Oct. 16 ASUCR meeting.

The proposed changes would move commencement from campus to the Toyota Arena of Ontario. The changes would also mean that the names of graduating students would not be called as they walk across the stage; instead, their names would be flashed on a banner-like screen.

After listening to students’ concerns during a protest held on Oct. 21, Thomas M. Smith, interim provost and executive vice chancellor, stated, “I can guarantee to all of you that we will announce names. We have lots of discussions that we need to continue having regarding the venue because we got a lot of feedback regarding the heat, the inability of families to see students walk across the stage, the unevenness of the field which causes challenges for those with mobility issues, particularly older people.”

In order to accommodate the large number of students in attendance for the ASUCR meeting on Oct. 23, the meeting was moved from the ASUCR Senate Chambers to the Tartan and Tweed Room located in the Student Services Building. ASUCR Parliamentarian Avi Idea announced that a 20 minute question and answer session would occur between students, ASUCR and Chancellor Wilcox and VCSA Haynes. Wilcox began by thanking students and ASUCR for their time. Wilcox stated, “We have gotten to a point … where our graduation rate is at about 75% which means we have half again as many students graduating than we did just a few years ago.” Wilcox then went on to explain that UCR has increased its number of transfer students and that they graduate in two years instead of four.

In order to address the concerns that many people had over how commencement was run, Wilcox stated that many things were discussed and options are still being considered. Wilcox then stated, “Nothing has been decided, no contracts have been signed, no money has been transferred, nothing has been done in that regard. We will have to at some point.”

During the question and answer portion, CHASS Senator Angel Cuevas asked what alternatives there are to holding commencement at the Toyota Arena. In response, Wilcox stated, “We have been doing most of our commencements on Pierce Lawn but not all. We do medical school in the SRC as well as the doctoral hooding ceremony. That works but it does not work for all commencements, it is not quite big enough.” Wilcox went on to state that Pierce Lawn holds about 7,000 people and commencements have somewhere between 700 to 1,000 students with the rest of the space being occupied by guests and family members.

When GSOE Senator Evelyn Castaneda asked Wilcox if the track field or the Glen Mor fields have been considered as possible commencement locations, Wilcox stated, “Both of those locations have a couple of challenges. One is that they don’t have trees for shade. The turf gets really hot … these locations are also not close to restrooms.”

Personnel Director Luna Sebastian then asked what issues or problems would arise from dividing up the ceremonies. Wilcox answered by stating that what they try to do is keep schools and colleges together. He said that part of the challenge is that they are already holding commencements from Friday to Monday and when they add more ceremonies, they start to have to hold some commencements on Tuesday or Wednesday which is a week after final exams. He stated, “Many students have left by then … moving to Tuesday and Wednesday is also difficult for families who need to take time off work.”

Transfer and Non-Traditional Students Director Eric Calderon addressed Wilcox and Haynes and stated, “I think that a big issue is the lack of transparency. You finally sent out an email today and in that email you referenced an email that you sent out to students but no one knew about it. I think it is unfair that we are just now barely finding out. A big concern for all of us is the lack of transparency and disconnection with the administration and with students.” 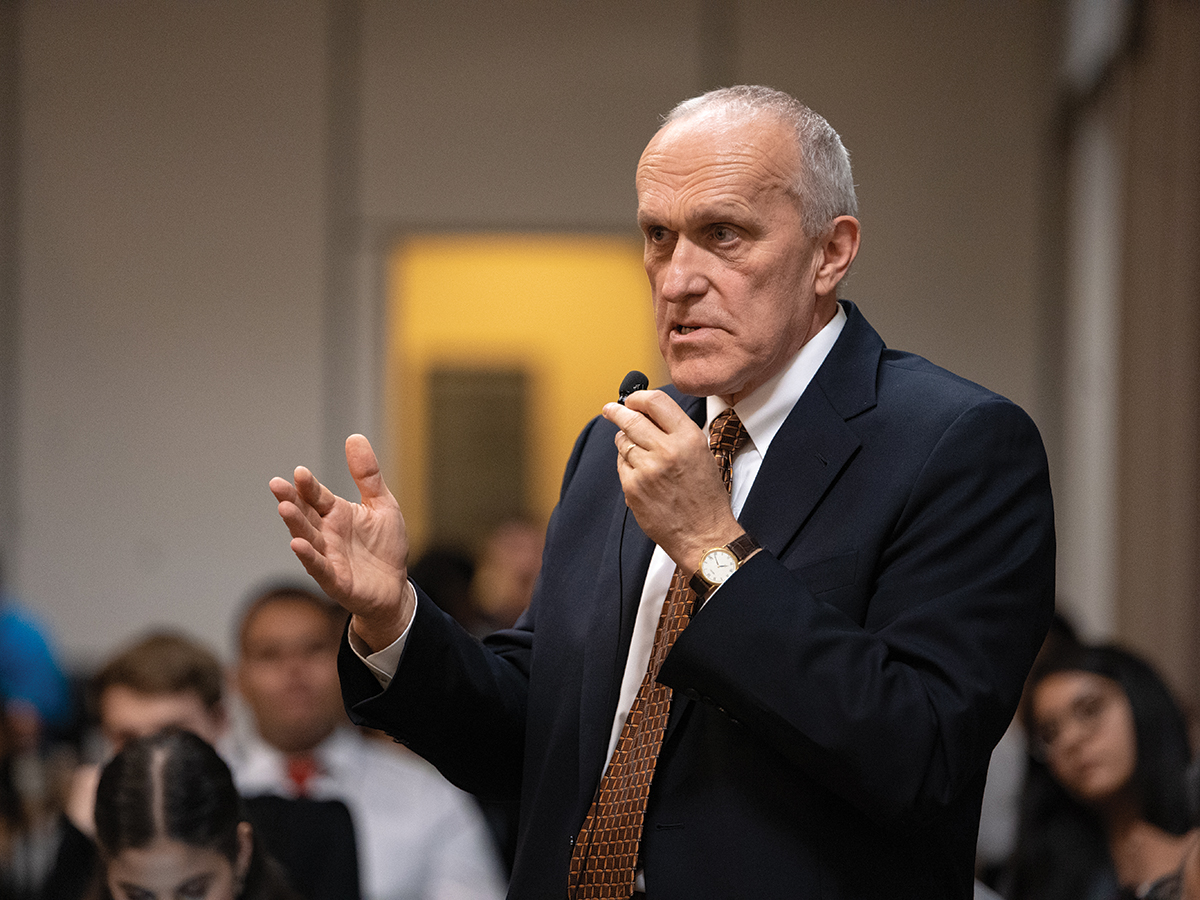 Wilcox responded by stating, “I meant to start today by apologizing. The letter I referenced in my email went out on June 28 and it was addressed to the campus community but it went to the staff and faculty but was never sent out to students. That is totally on me.” He also stated that Ancona and Mata attended the ASUCR meeting on Oct. 16 to develop ideas rather than start from scratch. “They attended because it was the beginning of the quarter and we have yet to make any decisions. It was not intentional to leave students out and I am sorry about that.”

Haynes also stated, “I appreciate your commentary. I want to apologize. As VCSA, my job is to ensure that student voices are on the table. I am committed to do a better job to make sure that student voices are heard at the table.” When a student from the public asked if there would be a plan to keep commencement on campus next year, Wilcox stated that they can certainly keep commencement on campus but that he is almost certain that it would mean fewer and fewer tickets for guests. “If we think location is more important than guest tickets then we can certainly work that plan out, but I can tell you that to date for nearly every year that I have been here we have more students raising concerns over the number of tickets than almost anything else,” stated Wilcox.

Another student also asked how much more would be spent having commencement at the Toyota Arena versus having it on Pierce Lawn. Ancona replied that if they were to host the same ceremonies this year that were hosted on Pierce Lawn for 2019’s commencement, it would cost approximately $430,000. Part of the reason for the price increase compared to last year, stated Ancona, is that Facilities Services is charging them but did not charge them last year. To do the ceremonies at the Toyota Arena for the one day and three ceremony plan, they are looking at an expense of about $230,000. If they move to a two-day and six ceremony plan at the Toyota Arena, the price would increase by about $130,000, stated Ancona.

After the conclusion of the Q&A portion with Wilcox and Haynes, the meeting moved back to the ASUCR Senate Chambers.

Chang noted that ASUCR has two kinds of checking balances. One for ASUCR to function and one for clubs to get funded. She stated that they have a savings account for club funding. The total organization allocation at the end of the meeting was $14,980. The finance committee voted to allocate $100,000 from the reserves to help fund clubs and organizations. The motion to approve both meeting minutes passed 17-0-0.

During the LRC reports, the senate passed SB-F19-013: Chapter VIII LRD Stipend Revision which would create a $990 stipend for a new position titled the Labor Relations Director. The bill was passed 17-0-0.

The meeting then moved on to officer reports. During Officer Reports, the members of the Executive Branch all updated the senate on the work they have done so far this quarter and the work that they plan to do.

During Public Comment, Gabe Pineda a second-year double major in Gender and Sexuality Studies and Media and Cultural Studies expressed their concern with a video posted on ASUCR’s Instagram page of ASUCR President Julian Gonzalez announcing that the administration agreed that names would be said at commencement. Pineda believed that this video presented Gonzalez as a savior of the student body and took credit for the work that other students did.