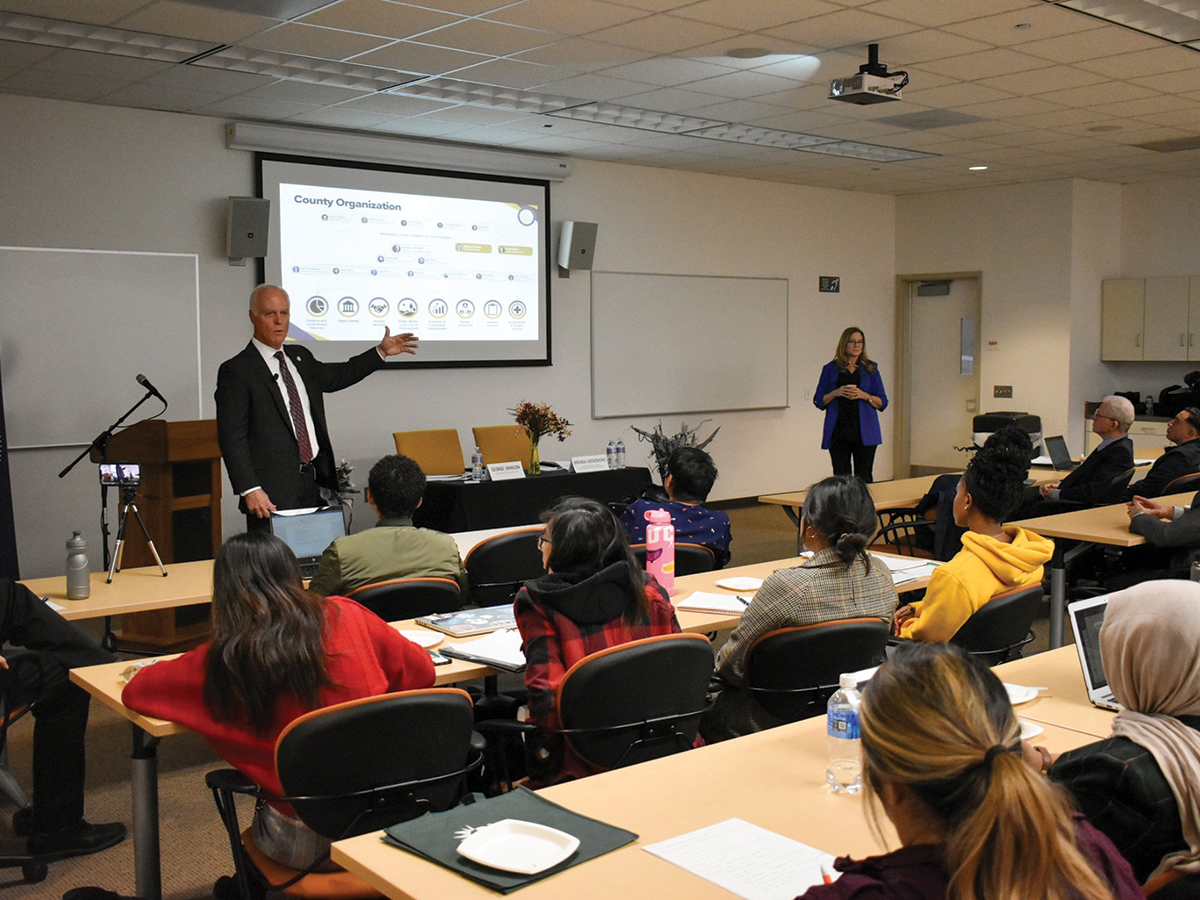 On Wednesday, Oct. 30, the School of Public Policy (SPP) hosted a seminar titled, “Shaping the Next Generation of Public Service.” The event began in the CHASS Interdisciplinary South room 1111 at 5:30 p.m.

SPP Marketing, Communications and Events Manager Mark Manalang and SPP Marketing, Communications and Events Specialist John Batres organized the seminar. The seminar was hosted by Kurt Schwabe, the associate dean for SPP while the two main guest speakers were CEO of Riverside County George Johnson and Assistant CEO & Human Resources Director of Riverside County Brenda Diederichs. According to Johnson, the event was meant to be an informative seminar that would not only provide a deeper understanding of Riverside County’s public policy system but he said that he wanted to inspire the members of the audience to pursue a career in county government.

Schwabe opened the event by introducing the speakers: Johnson has served as the county’s chief assistant executive officer for five years and Diederichs, a labor law attorney, has “more than 20 years of experience in the public sector.”

Johnson said, “county government is one of those areas of government that’s not very well understood.” He spoke more of his beginnings in public policy and that he received a degree in civil engineering because he “wanted to create quality communities that people wanted to live in.” Diederichs focused on her past working for human resources in the public sector at San Bernardino County and said, “when you are in public service there is no such thing as just doing the little job you set out to do.”

Johnson played a video that displayed the different programs and services the county provides its residents; he described that the infrastructure of the county departments is essential to provide these programs and services. Johnson spoke of Riverside County’s rapid growth stating that it will “continue to grow to two million people in the next five to six decades … with that growth comes tremendous challenges.”

Washington stated that the board can authorize and enforce ordinances that do not conflict with state law, however, individual supervisors cannot make ordinances or decisions about the district. Washington said, “No decision or ordinance can be implemented without the support of at least three of the five supervisors, even if that decision or ordinance only affects one district.” He said that the board represents unincorporated areas because those locations don’t have a city council. Washington said the board makes decisions that affect the everyday lives of county residents such as road improvements, health policies, traffic signs and more.

Johnson said, “We are the public safety net. We are providing services to those who are most vulnerable in our communities who can’t afford services themselves.” He gave examples of homeless people, residents who have mental health issues, substance abuse problems and many more.

Johnson stated, “the internal reorganization efforts we are focusing on is creating high performance through collaboration, trust and accountability.” Johnson said that as CEO of Riverside County he wanted to improve the communication and collaboration with the county departments. Diederichs stated that an open line of communication between the head officials and those who want to get into public policy is important to find the best ways to train and mentor them.

With regard to the seminar and speakers, Maddie Bunting, the SPP chief ambassador and public affairs student assistant said, “I think it went wonderfully … They really want to hear our voices, which is important to come from leaders of the government.” Regarding the importance of speaking at the seminar, Johnson stated, “We think it’s very important to support the UCR school of public policy. More importantly we want to create a partnership where we can help one another out.”

After their presentations, Johnson and Diederichs answered questions from the audience. The event ended at 7 p.m.