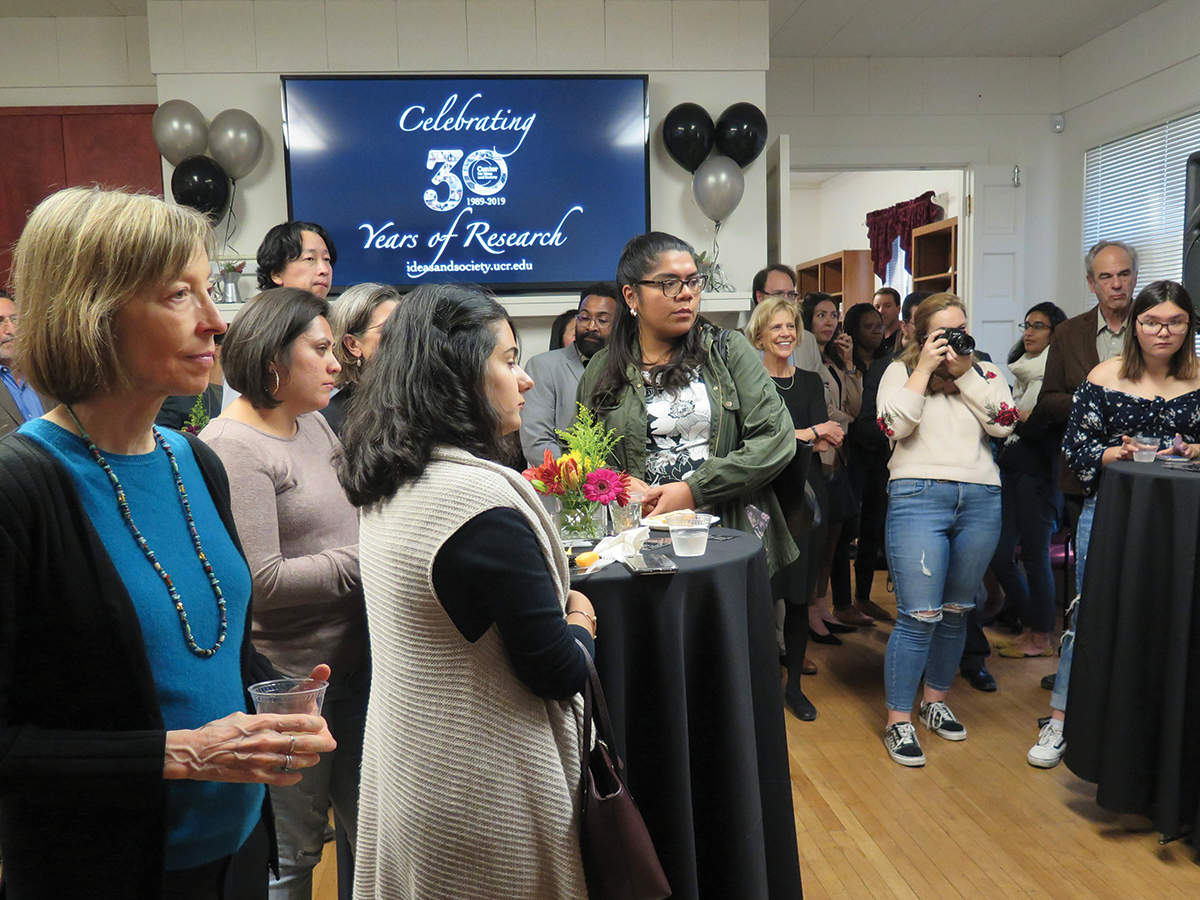 Correction: This article was corrected to reflect these following changes:

Professor Georgia Warnke did not state the purpose of the center was to heal a broken world. Joe Childers is the former Dean of the Graduate Division, not Graduate Studies. The prize associated with Emory Elliott that is administered by the Center of Ideas and Society is the Emory Elliot book award that is awarded to a CHASS professor.

On Tuesday, Oct. 29, UC Riverside’s Center for Ideas and Society (CIS) celebrated their 30th anniversary. Since 1989, the Center has supported CHASS faculty in their personal groundbreaking research and helped UCR solidify its humanities and improve the school’s social studies.

As its mission states, the CIS is meant to “promote and advance humanistic research and study at UC Riverside.” UCR professors, researchers and graduate students collaborate on each other’s work and carry on discussions about the world’s current culture and the direction it’s headed.

When founder and UCR philosophy professor Bernd Magnus established CIS 30 years ago, his vision for it was “to heal a broken world.” In an email interview with The Highlander, Warnke said, “Magnus envisioned a center with what was at the time a new and innovative approach to research: interdisciplinarity.” With the humanities covering so many fields, this is the place for different research backgrounds to convene and find impactful agreements between each others’ studies.

The soul of the Center rests with Magnus. “Bernd was a charismatic person,” said former associate director and English professor Steven Axelrod. “You felt his presence in any room he was in.” Even back when the Center conglomerated at the Ramada Inn, Magnus was passionate about making the meetings just right. “The Center’s parties became huge successes,” Axelrod said in a speech, “deconstructionists talking to historians in perfect weather around a crystal clear kidney-shaped pool.”

Magnus’ first years of his life were spent at a German death camp during the Holocaust. According to a 2014 article by The Highlander, he was born in the town of Danzig, Germany, where he was taken to the concentration camp Bergen-Belsen because of his Jewish faith. He and his family soon escaped to New York. Axelrod, having been a close companion to Magnus, described, “He embraced his new American identity even as he was haunted by his previous one. He wanted to show off his new identity, even as he hid his old.”

The Holocaust survivor grew up to become a scholar of philosopher Friedrich Nietzsche, graduating from Columbia University. He published analytical books discussing Nietzsche’s thought while teaching philosophy to UCR students. His other great involvement was connecting with the Jewish community in the Inland Empire, as he would visit synagogues and share memoirs to fellow Americans of his religion. He died in 2014 due to illness.

Axelrod explained what qualities UCR students can take from Magnus. “Bernd rose from unimaginable suffering as a child to do good in the world,” stated Axelrod. “I think we can all take inspiration from that.”

“To do good in the world” is the probable reason why research institutions like universities and laboratories are created. It is the mission to constantly revolutionize how humans live today, yet there lies competition on what fields truly help humanity in significant ways. “Humanities and humanities centers are generally under attack,” stated former Dean of the Graduate Division Joseph Childers, “but the university continued to support the Center.”

Warnke explains, “The work of the humanities is often dismissed as a luxury, or as irrelevant, to a world oriented to advances in technology, science or medicine.” She continued to say that the 2010s decade is marked by pushing young students’ interest in STEM careers, and it’s common for parents to push their student children to earn careers that “matter,” such as in the medical field or engineering. Yet, Warnke states, humanities scholars ask essential human questions such as who we are and how we got here. To reference Magnus’ mission to “heal,” advancements in health and technology won’t matter if the world continues to be, at its soul, broken.

In fact the connection between the sciences and humanities is made stronger through the Center, according to Childers. “Researchers and the faculty have seen each other for 30 years in this place. We interrogate each other, sometimes not in pleasant ways, but always progressive,” said Childers in a speech. Their common catchphrase is “Theory is dirty business.”

Emory Elliot took up director of CIS after Magnus handed it over. A professor of American literature at UCR, he pushed CIS to garner attention across America. According to UCR’s Department of English website, he brought in grants from major foundations like the Ford and Rockefeller foundations and sponsored nationwide conferences through CIS, which “placed Riverside at the center of national discussions of a progressive future for the Humanities.”

There is now an Emory Elliott Endowed Memorial Award, which annually recognizes a CHASS professor’s in their recently published book. Elliot died in 2009. “I think (Magnus) wanted to reward the excellent scholars who were already here with a welcoming and lively place to talk, think and write. I think that was true of Emory Elliott too,” Axelrod said.

Members say Warnke is fit to lead the center because philosophy regards ideas and political science regards society. With both Elliot and Warnke continuing leadership of CIS, Axelrod states, “They also wanted the Center to be a place to help heal a broken world, to increase the amount of light and justice in the world.”

UCR undergraduate students typically think of the university as a place of instruction. As it goes for all universities, it is also a place where researchers convene and discuss, directly impacting the same fields that are taught to students concurrently, where their published findings are constantly changing subjects at this moment.

CIS invites students to their upcoming conferences, such as the Populism after Socialism conference on Nov. 15, Legacies of Commedia Dell’ Arte on Nov. 21 and When East meets West on Nov. 22.