The event featured a number of political speakers who addressed the underrepresentation of women in politics, spoke about the challenges women of color face in politics and encouraged women aspiring to join politics to pursue these ambitions.

WRC Director and Redlands Mayor Pro Temp Denise Davis said that the PERSIST conference is designed to engage more women in politics and emphasize the focus on women of color, gay women and people from marginalized communities. Davis introduced UCR Associate Vice Chancellor (AVC) and Dean of Students Christine Mata. Mata stated, “The focus of the conference is to connect us to visionary leaders, organizers, nonprofit CEOs and women who are holding local office.”

“History was made in two groundbreaking elections this week,” said Davis. Davis stated this in regards to Erin Edwards and Gabby Plascencia, the first women in six years join the Riverside City Council and the first LGBT woman and first Latina to be elected, respectively. Near the end of the conference, Edwards and Plascencia spoke about their campaign experience and their thoughts on women in politics.

Plascencia stated, “This is our win. This is the community’s win. This is the youth’s win because you will be next. I was here last year as a candidate … Imagine where you could be a year from today.” Regarding her own experience, Edwards said, “To the students in the room, if you ever doubted that your voice matters, it matters a whole lot and it’s actually the only way we can see the change that we create.”

The first keynote speaker was Supermajority’s Head of Community Engagement Yvonne Gutierrez. She said, “Supermajority is on a mission to build women’s political power across issue, race, generation and geography.” Gutierrez said Supermajority has collected data from participating women of color during conventions to try to uncover what issues they were interested and how they wanted to handle them. Gutierrez stated, “We have to think about how we can be more thoughtful about mobilizing … We have to be organizing on issues that people care about.” 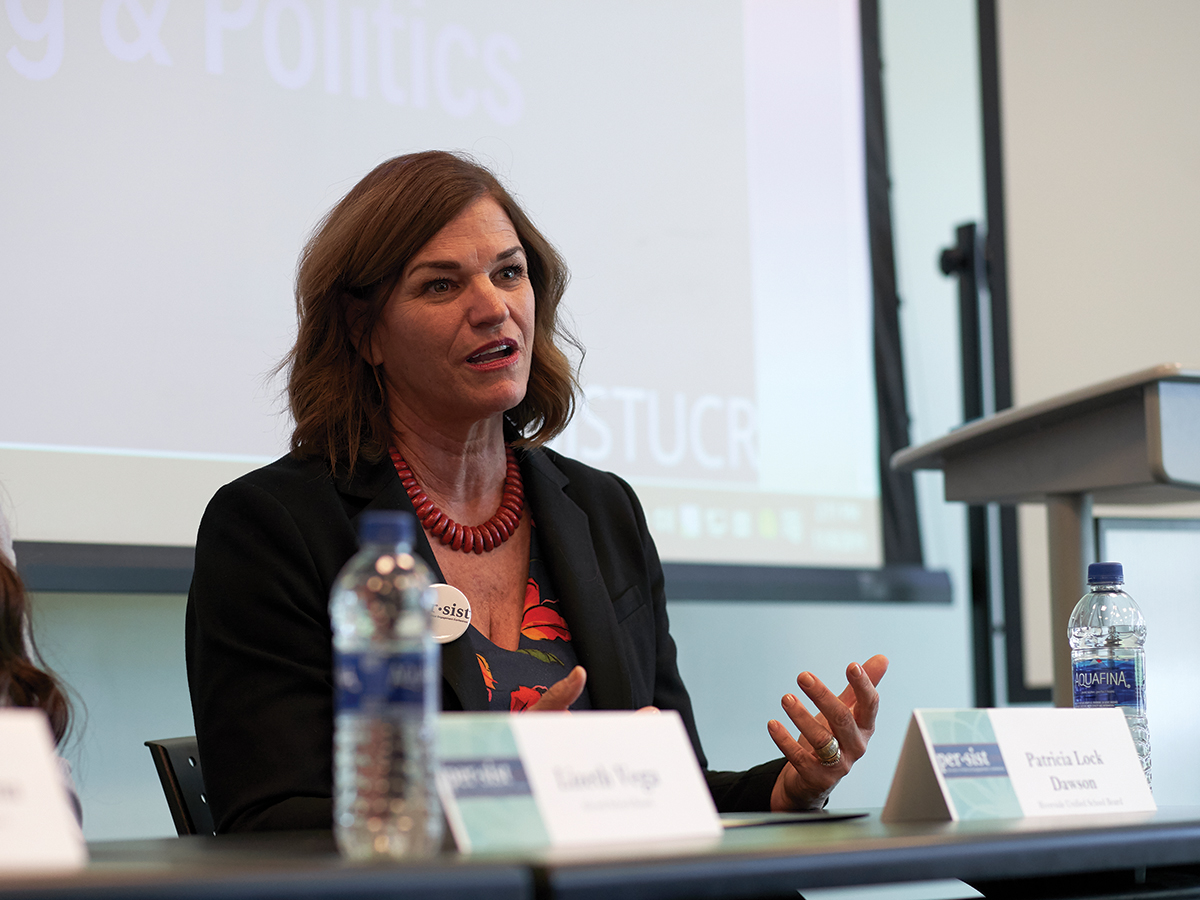 Gutierrez stated one major issue is that “the U.S. is the only industrialized country in the world without paid family leave.” Gutierrez said that a woman who gives birth in the U.S. today are 50% more likely to die from childbirth than previous generations. Gutierrez added that these statistics are much worse for women of color.

Free food and snacks were provided at the event. There were breaks between speaking engagements to allow the audience to eat and browse the resource fair, where women’s advocacy organizations and affiliations were tabling. These tables included Mi Familia Vota, Riverside Area Rape Crisis Center (RARCC), justCARE, Ignite and many other political or women’s advocacy groups. During this break, the WRC held a separate program in the HUB lobby called Mentor Cafe, where audience members could have one-on-one dialogue with the conference speakers.

After the resource fair and mentorship sessions, there were two breakout sessions where audience members could participate in workshops led by the organizations present. These different breakout programs included the Underground Scholars Initiative, Close the Gap campaign, Parenting and Politics, justCARE: The Power of Student Organizing, Women in Politics: Ignite and many more.

Following the breakout workshops, the WRC continued with the next panel: Women’s Wave of 2018. This panel was moderated by Tiffany Tran, field representative for Jose Medina’s office. The panel was focused on the Inland Empire’s local elected officials and their impact on the communities they represent.

CEO of the Women’s Foundation of California (WFC) Surina Khan expressed her concern for the gender disparity that is present in the Inland Empire. The WFC is a nonprofit organization that is devoted to reaching economic, racial and gender justice through a focus toward the experience and knowledge of communities that have the immense systemic injustice. She said, “Modern gender justice movement and greater representation in policy is needed because we are coming across threats to our freedom and agency every day.”

The last keynote speaker Ericka Flores, a law school graduate spoke of the struggles of being a poor, undocumented immigrant attending law school. Flores described how difficult it was fitting into a law school and a judicial environment that did not have many women of color.

The final panel of the conference was on criminal justice reform and was moderated by WRC member Jessica Moronez. The panelists discussed the unjust damage the prison system has done to many women of color and their families. They talked about the way the prison systems in the U.S. do not try to rehabilitate inmates, but instead cause long lasting social, physical and psychological damage to inmates. Reseda said, “Policy is used as a tool to control people’s lives who are impacted by the incarcerated system … the policies will always reflect the culture and the culture will reflect the policies.” Regarding the conference, Davis stated, “I think it’s powerful for those who attend. We hear stories about how the events inspire people to take action in their own lives to pursue advocacy or activism.”