The event began at 6 p.m. but starting at 5:30 p.m., attendees were able to walk around the room and visit different presentation tables regarding the budget, planning and location of the school. Community members were also encouraged to fill out a comment card in order to have a chance to speak during the community input portion of the meeting.

At 6:00 p.m, Gerry Bomotti, the vice chancellor of planning, budget and administration, began by going over the agenda and introducing the first speaker, RUSD Superintendent David Hansen. Hansen welcomed and expressed his gratitude for everyone in attendance by stating, “Community engagement is better than no community engagement, and I hope this evening as we share our discussions, we are respectful to each other.”

Jeff Kraus, the director of community and local government relations, addressed some concerns regarding the previous proposed location of the high school. The proposed site changed from Watkins Avenue and Valencia Hill Drive to the southwest corner of Blaine Street and Canyon Crest Drive in June. In response to concerns regarding traffic around the area, Kraus stated that according to UCR and RUSD, “Blaine and Canyon Crest are more significant streets than Watkins and so the traffic impact will be far less.”

Another previous concern that students had was the removal of two recreational fields that are utilized by intramural sports at UCR. Kraus assured that “UCR is committed to replacing the rec fields … when this project moves forward those will be relocated to the corner of Linden and Canyon Crest as part of the North District Project,” a campus expansion project that began construction in July.

Another concern that Kraus addressed was potential constraints to UCR faculty time to which Kraus responded, “UCR is not able to commit with faculty members to partner with the STEM high school, but it is something that we anticipate will happen given its proximity.” At the previous campus forum held in June, Kraus said that student safety was a concern that had been brought up by many. 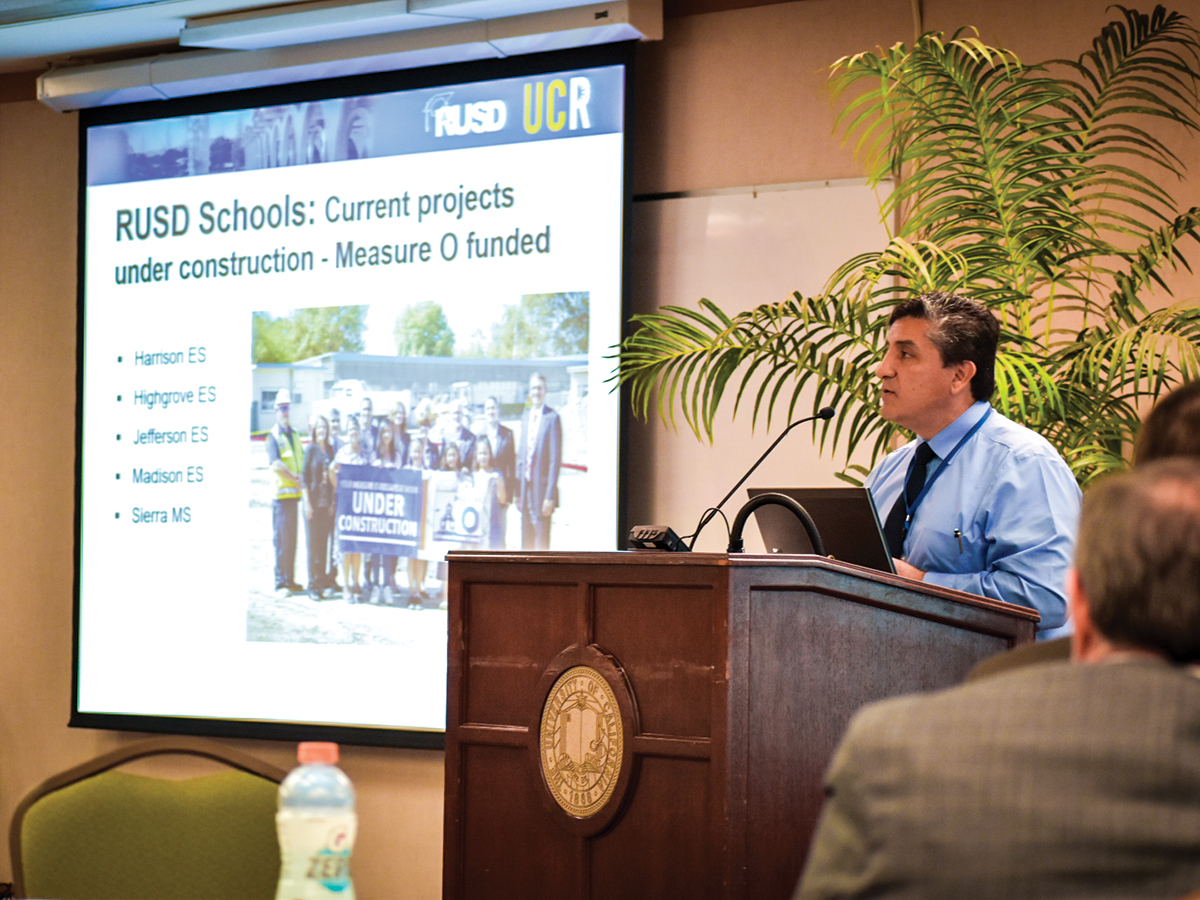 He stated, “Student safety is RUSD and UCR’s number one priority.” Kraus also mentioned that the provost committee has reached out to other high schools on or near college campuses to research the best practices, security, use of resources, parking. Since, they’ve received feedback from UC San Diego, CSU Dominguez Hills, CSU Fresno and Cal Poly Pomona. “We’ve been able to get some great information from them,” stated Kraus.

Sergio San Martin, the assistant superintendent of operations for RUSD, went on to speak about how Measure O is helping fund the school. Measure O was a bond measure that was passed by the city of Riverside in 2016 to “repair and upgrade Riverside schools” as well as “build a center for the study of advanced science, technology, engineering and math, that will give local high school students access to college-level instruction” as stated on the ballot under Resolution 2015.16-56.

The STEM high school is set to cost around $64 million, half of which will be funded by the Measure O bond. San Martin also stated that the site is being investigated to meet state standards including a risk assessment, geotechnical analysis and an environmental impact report.

After the presentations, the community portion brought around 80 speakers. Speakers were given two minutes to voice their opinion on the project and their responses varied from positive to negative. Kraus reminded the crowd that this would not be the only time they would be having a community discussion as they “have a standing invitation and have been talking to ASUCR about having another student forum … hopefully before the end of the quarter.” This would be similar to the town hall that was held in June. More town halls are set to take place toward the end of the year and early 2020 that will allow for further community input and more information about the progress they have been making to break ground on the school.

A final site analysis is set to take place during late November and December. Beginning in 2021, the city will conduct environmental reviews, approvals and bidding. Construction is set for early 2022. If the timeline provided by RUSD is correct, the site should open in mid-2024.