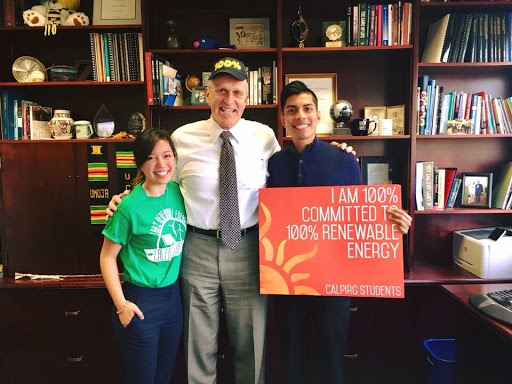 About the author: Alan Arteaga is an International Affairs major and CALPIRG intern in for their 100% Renewable energy campaign.

Humanity is sitting on a ticking bomb, placed by our unwillingness to veer towards renewable energy sources. With recent news reporting on numerous fires throughout the state, the Inland Empire has had its fair share, with a brush fire taking place near campus over the last weekend. These fires have a direct correlation to the climate change crisis that the Earth is undergoing. The answer to directly combat these devastating fires is by making the switch to renewable energy sources.

With SB100, the whole state of California is committed to have 100% clean and renewable energy by the year 2045. But by the year 2045, we will have already seen the worst impacts of climate change. The student organization CALPIRG (California Public Interest Research Group) has lobbied to commit the entire UC-system to only use renewable energy sources by the year 2025. Of all the UC campuses only UC Berkeley has put forth a plan, setting their campus on track to meet the commitment. In the past, Chancellor Kim Wilcox has been known to endorse the UC 100% Clean and Renewable campaign but yet to make a commitment. Despite this, UC Riverside has failed to deliver a plan to meet this commitment. Putting forth a plan will make the campus a leading force in tackling climate change in the Inland Empire. Why not be Champions and lead the Inland Empire with clean sources? If these plans are put in motion, students and community members alike will see radical improvements in air quality and other environmental factors that would improve overall health.

If the plan that UCR puts forward is successful, then that success could become influential to other local colleges and universities to increase their environmental initiatives as well. As mentioned in the Opinions section of last week’s editorial, “The California wildfires will continue to rage … ” California is a leader in environmental policies, so any changes made here could have an impact across the entire nation. Every effort counts when it comes to dealing with the effects of climate change, and UCR could become a leading force to prevent future wildfires and other environmental disasters.