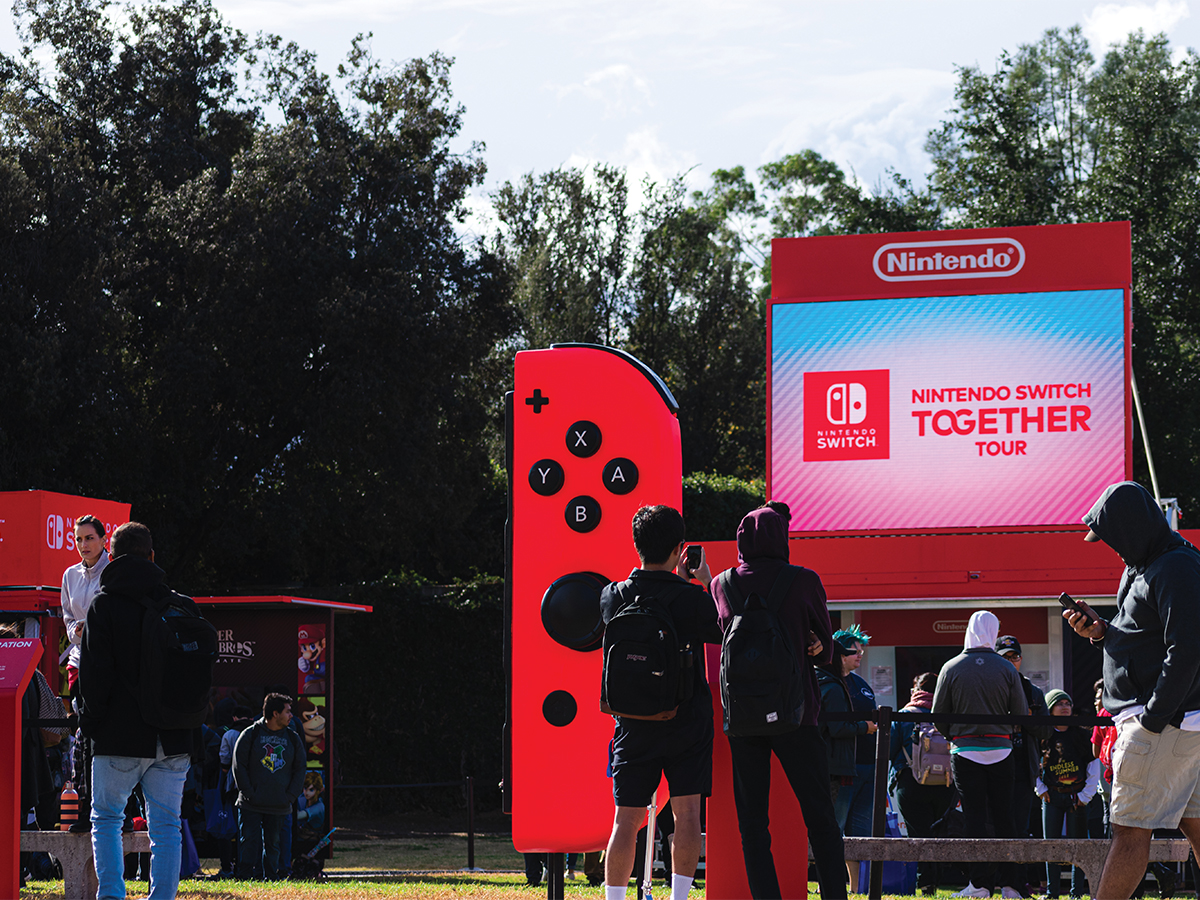 On Wednesday, Nov. 20, at 11:00 a.m., the Associated Students Program Board (ASPB) celebrated the 20th birthday of UCR’s iconic mascot: Scotty the Bear.

UCR celebrated his 20th birthday as ASPB provided free chicken veggie bowls from WaBa Grill and ice cream sandwiches from Slickables. They put out tents where students could pick from black, turquoise, navy blue or orange ink to customize their Scotty’s Birthday shirt. They also brought Lake Chon, a DJ duo consisting of two members, Chris Khe and Torrance Cui, to provide electronic music to the party. Right next to Scotty’s Birthday celebration was the Nintendo switch event, a two-day event that wasn’t affiliated with Scotty’s Birthday celebration, but convenient for students to go to during or after the party.

Daniel Kim, a fourth year majoring in religious studies, expressed his experience as an unforgettable one even with the dreary weather. “Today’s event was pretty lit. I had a good time and it was really chill, literally, because it was raining,” stated Kim. Kim attempted to gain as much free gear and food as he could with his friends. “I went to the Slickable tent and got a free ice cream sandwich, got a free turquoise t-shirt, and I’m about to go to the ASPB tent for a chance to win a free sweatshirt.”

Despite the cold weather and the constant rain drops hitting his face, Kim still enjoyed the celebration. “The ice cream was probably one of the best ice creams I’ve ever had, it was a blizzard of flavor in my mouth. I’d rather have the weather be really cold and eat ice cream than when it’s super hot,” describes Kim. Throughout the celebration fellow students walked around the Bell Tower with either a bowl of steamed vegetables, meat and rice, or a delectable ice cream sandwich.

Sean Kim, a fourth year majoring in psychology, was drawn to the celebration after noticing the long lines that reached to the Rivera Library. “There were huge lines and I found out they were giving out free stuff, I got free Slickables and I got a free Scotty’s Birthday shirt,” stated Sean Kim.

After Lake Chon played their first song around 12:30 p.m., the main attraction, Scotty the Bear himself appeared to his own celebration decked out in R’Gear. ASPB and UCR’s cheer team sang an exciting rendition of “Happy Birthday” to Scotty while students around the vicinity sang along and applauded for Scotty’s celebration. As always, this friendly character walked around the event spreading a happy virus and school spirit to students despite the murky weather.

Unlike most birthdays, according to Geovanni Mayoral, an interim student organization coordinator and the Highlander Band coordinator, Scotty the Bear doesn’t have a specific birth date, but is celebrated on the Wednesday of the week of Homecoming.

Interestingly, UCR’s mascot wasn’t always a bear, it was initially a Scottish terrier. “There was a professor in the school’s inception, who owned a Scottish terrier, and that was the school’s mascot for the first two years of the school’s existence,” said Mayoral. In 1956 students were able to vote for a new mascot. “They landed with Hylanders at the time it was spelled with a ‘y’ instead of ‘igh’ because we are the highest elevation UC in the UC system,” stated Mayoral.

Drawing from the Scottish theme, they came up with the name Scotty and dressed him in traditional Scottish clothing such as the kilt and the Balmoral bonnet, which is the scottish hat. “The change in terms of animals has to do with the preexisting schools mostly, so UCLA and Berkeley were already bears. The UC system at the time when the school was being made wanted to be consistent with their sister schools,” stated Mayoral.

In recognition of Scotty, the graduating class of 2002, 2004, 2007 and 2009 donated the infamous bronze Scotty statue built next to the big, silver UCR sign near the HUB, where students can sit to take pictures.

This friendly bear appears every Wednesday for R’Day and nooners to lighten up the atmosphere and to ignite school spirit. If you haven’t already, you might catch him expressing his comedic gestures by jokingly cutting people in a long line or making silly poses for pictures.

The celebration for Scotty’s 20th birthday concluded at 1:00 p.m. ASPB tables every Wednesday for R’Day, where students can get a chance to win all sorts of R’Gear, while listening to the nooner’s featured artist. They also let students choose which artists they want to see at big events such as Block Party and Spring Splash. Some of their future events include “Breakfast Sandwiches” that will be held in the Rivera Library on Monday, Dec. 9 at 2:00 p.m., where students who come will be served free breakfast sandwiches as part of the Finals Week Stress Relief series.