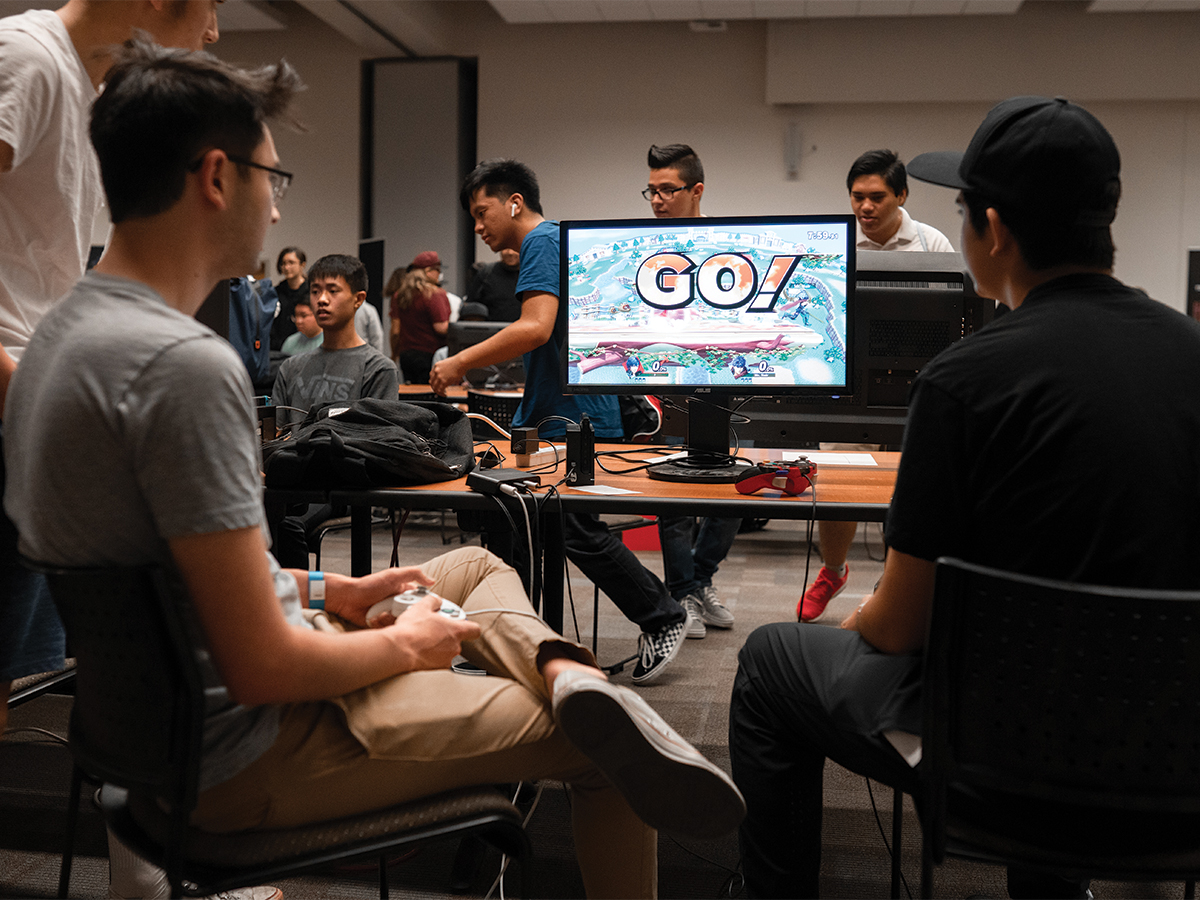 The HUB’s third floor was crowded by hundreds as Highlander Con began last Sunday, Nov. 17, at 11 a.m. Hosted by Highlander Gaming (HLG), UCR’s major gaming organization with over 1,000 connected members, the Con offered students and non-student visitors alike a chance to engage with con-goers through video games — and many games there were, all with a culture of their own.

In the middle of HUB 302 were two rows of TVs, stretching almost from the door of the room to the stage at the north end. Con-goers were playing “Super Smash Bros. Ultimate” (SSBU) and “Super Smash Bros. Melee” (SSBM) as a part of Con’s customary tournaments, which this time around were also held for first-person shooters (FPS) “Counter Strike: Global Offensive” (CS:GO) and “Rainbow Six Siege,” as well as the hit multiplayer online battle arena (MOBA) game “League of Legends” (LoL).

LoL teams from UCR, Cal State University Fullerton (CSUF), Cal Poly Pomana (CPP), UC Los Angeles (UCLA) and Norco Community College (NCC) came out to fight it on stage and on the big screen. Matches were broadcast throughout the day, where viewers cheered and jeered as teams slayed the competition or the bit the dust on the game’s titular map, Summoner’s Rift. Final matches for other tournaments were displayed as the evening came.

Visitors were also free to play their own games on their own time in HUB 260, or the online mouse-based rhythm game called “osu!” in HUB 269. On the west side of HUB 302, visitors could don a virtual reality mask and play the hit rhythm game “Beat Saber,” supplied by one of HLG’s sponsors, many of which lined the west wall. Many of the sponsors were of the computer gear industry, like Nvidia, which sells graphic processing units (GPU) and HyperX which is known for gaming headphones and keyboards. They talked about their products to interested attendees.

If con-goers wanted a break from the games and its virtual facets, they could stop by the Artist’s Alley, where student artists and traveling artists could sell their work to purveyors. But the art in the Alley was not the Con’s only take on visual creativity: cosplayers of all sorts traversed the Con, exhibiting garb inspired by video games or even anime.

One of the staff photographers was dressed up in fox ears, a blue dress and black heels, a wardrobe inspired by the magical “Caster” from the Japanese “Fate” series. Consisting of video games and anime, “Fate” is notorious for what some would consider convoluted storylines but is popular (having received over $3 billion for their recent mobile game) and pervasive enough to have found its way into the Con. At around 12 p.m., many cosplayers found their way to the stage as the Cosplay Contest began.

Second-year history major Juan Baumer was dressed up with props inspired by in-game cosmetics from FPS “Team Fortress 2” (TF2). “Highlander Con is one of our few chances (as students) during classes that we can express our preferences for certain video games and genres,” Baumer expressed, and his outfit showed his own preferences very well.

On his head was a pair of bunny ears, inspired by the TF2 cosmetic “Max’s Severed Head,” referring to character interactions between a heavy weapons operator and a detective bunny named Max. In his hand was a weapon known as “The Conscientious Objector.” It was a makeshift picket sign where supposed users “gave peace a chance,” but noted that “it didn’t work,” based on the game description.

TF2 is humorously known by the gaming community as “Hat Simulator,” due to its copious levels of for sale virtual hats and other items, but that doesn’t stop Baumer from enjoying the main game itself. “Don’t be afraid of what others think of the games you like to play,” Baumer said. “TF2 might not be as relevant as games like LoL or Rainbow Six Siege, but you still have the right to enjoy it.”

Non-student visitor John and his friends dressed up as Rainbow Six Siege characters, each of them decked out in tactical gear based on a playable character. “We just attend cons like these to show off our stuff,” John said; showing off their stuff they did, with one of his friends winning first place and the rest of them winning prizes as well. But as impressive as their attire was, so was the cost to make them; “mine probably cost around $150, and maybe more for the others,” John said.

As attendees played and explored everything the Con offered, the event itself concluded around 10 p.m., as the final SSBU tournament match ended on-stage. John highlights the sentiment con-goers experienced throughout the day, saying, “It’s nice to see so many people with the same interests all together in one place.”