On Thursday, Nov. 21, Chancellor Kim. A Wilcox held a fall campus update at 12 p.m. The update included presentations by the chancellor and Vice Chancellor for Student Affairs Brian Haynes, with opportunities for questions afterward.

At the beginning of the meeting, Wilcox provided a land acknowledgement. The beginning of the acknowledgement stated, “In the spirit of Rupert and Jeanette Costo’s founding relationship to our campus, we would like to respectfully acknowledge and recognize our responsibility to the original and current caretakers of this land, water and air: the Cahuilla, Tongva, Luiseño, and Serrano peoples and all of their ancestors and descendants, past, present and future.” Wilcox stated that he wanted to roll this statement out more broadly in order to remind the campus about what land the campus rests on and what the campus owes to the people who came before us.

Wilcox then gave a powerpoint presentation. The first part of the powerpoint was titled, “Changing the Narrative in Higher Education.” Wilcox noted some of UCR’s successes in the past years. He mentioned that UCR was named the fastest-rising university in America by U.S. News, Forbes, Wall Street Journal and Times Higher Education. UCR was also included in the top 20 Public University list by Washington Monthly, Money Magazine and Forbes. Additionally, the Center for World University Rankings named UCR as being in the top one percent of universities worldwide. Wilcox stated, “We move students further ahead than anyone else in the country and I think that is amazing.”

The next slide Wilcox presented was titled, “Campus Budget and Priorities.” The slide stated that UCR has a $1 billion total budget which includes auxiliary services that are not funded by state support or tuition and fees. This includes housing, dining and hospitality services and transportation services. UCR has a $575 million core budget which comprises of core teaching and research operations for the campus.

Wilcox then explained that UCR’s core revenue comes from: 50% student tuition and fees, 44% from California state general funds and 6% from non-resident student supplemental tuition. According to Wilcox, 68% of UCR’s core expenditures go toward total salaries and benefits, 17% goes toward financial aid and 15% goes toward other expenses. 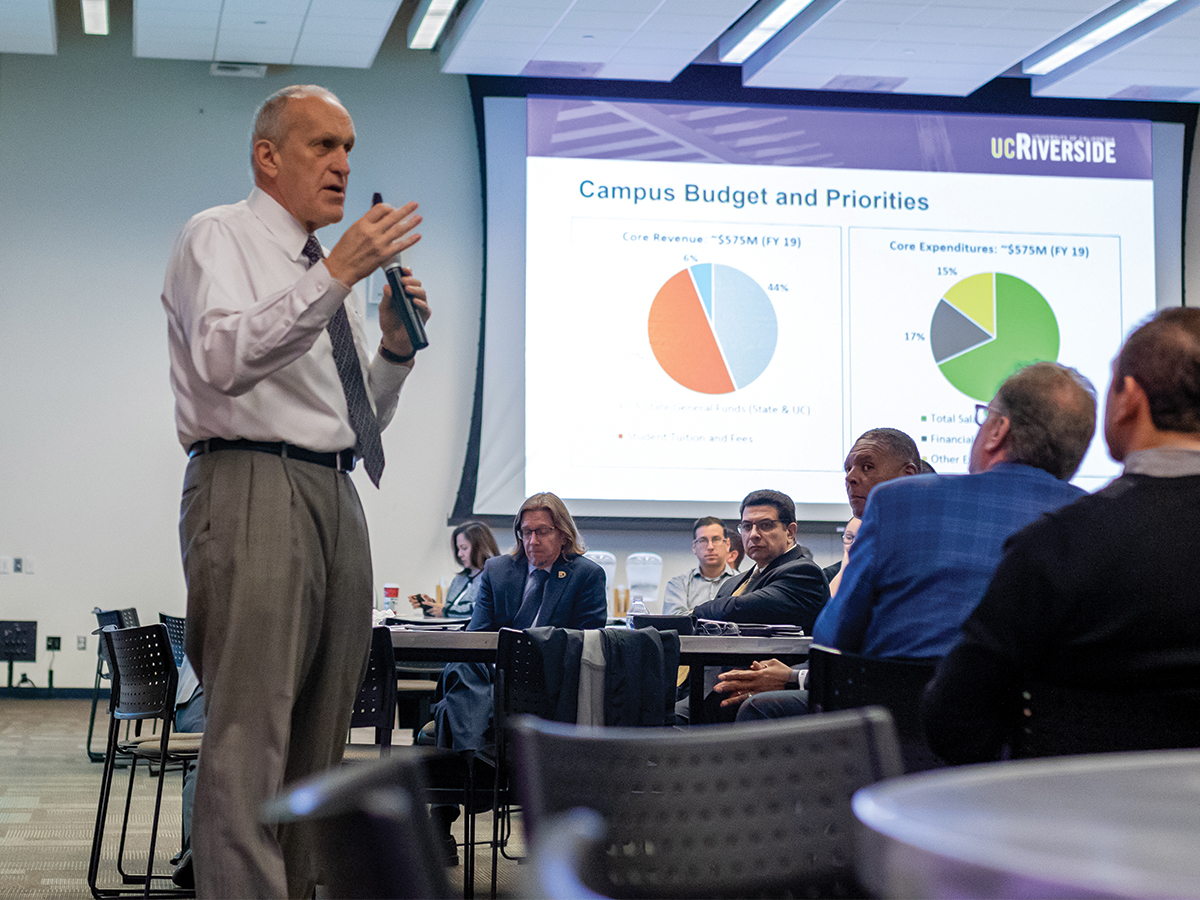 Wilcox then noted that UCR is the lowest state-funded campus in the UC, has the highest student-staff ratio in the UC, has critical capital and infrastructure needs and that UCR’s School of Medicine is significantly undercapitalized. Wilcox stated, “It would take 740 new staff members to get the correct student-staff ratio. We do not have the people that we should have to get the job done … The state of some of our buildings, there are terrible buildings … You cannot be underfunded all this time and not have consequences.”

The next slide Wilcox presented was on California Proposition 13. This proposition would create a school and colleges facilities bond in March of 2020. This would focus on seismic improvements, deferred maintenance and enrollment growth. It would grant $2 billion to the UC system. Wilcox stated that the priorities for the bonds would create new undergraduate classrooms and a lab and studio teaching facility. It would also go toward Spieth Hall improvements, Rivera Library improvements, a new School of Business Building and a new Bourns College of Engineering Building. All of these priorities are still pending review and approval.

The presentation then moved on to UCR’s task forces and initiatives. Wilcox stated that new task force is being put in place and will be called the Campus Culture Task Force. This task force, stated Wilcox follows the 298-page investigative report released by the UC Office of the President that detailed a pattern of inappropriate behavior in direct violation of the UC’s Sexual Violence and Sexual Harassment (SVSH) policy on the part of James Sandoval, former vice chancellor of student affairs. Wilcox stated, “We have a lot of work to do about our own environment and this group has been tasked to conduct a review UCR’s culture.”

Haynes then gave a presentation on student affairs at UCR. Haynes stated that the Student Affairs office conducted a workplace assessment and found emerging themes of a lack of a sense of belonging, employee satisfaction, trust in leadership and a need for professional development among staff and faculty at UCR.

Haynes also gave a presentation on campuswide task forces and committees. One of these committees is the Ad-Hoc North District Naming Committee. Haynes stated, “Traditionally at UCR, we name all of our residence halls after places in Scotland. This committee is looking to revise that policy to take into account the indigenous people of this region, the state of California and of this nation … We are thinking of moving away from naming residence halls in the North District after locations in Scotland and instead focusing on Native American history.”

Another focus group created is the Black Student Experience Working Group, stated Haynes. According to Haynes, this group will focus on increasing black student enrollment, black student success and understanding black culture at UCR. A Commencement Focus Group has also been created to discuss alternatives and solutions for UCR’s commencement ceremonies.

The meeting then moved on to a short question and answer portion. One member of the audience stated, “We are the most diverse university in the UC system and yet we are the most underfunded. I find that depressing and pathetic.” Wilcox responded stating, “You are singing my song … there is a negative correlation between our diversity and the dollars provided to our campus.”