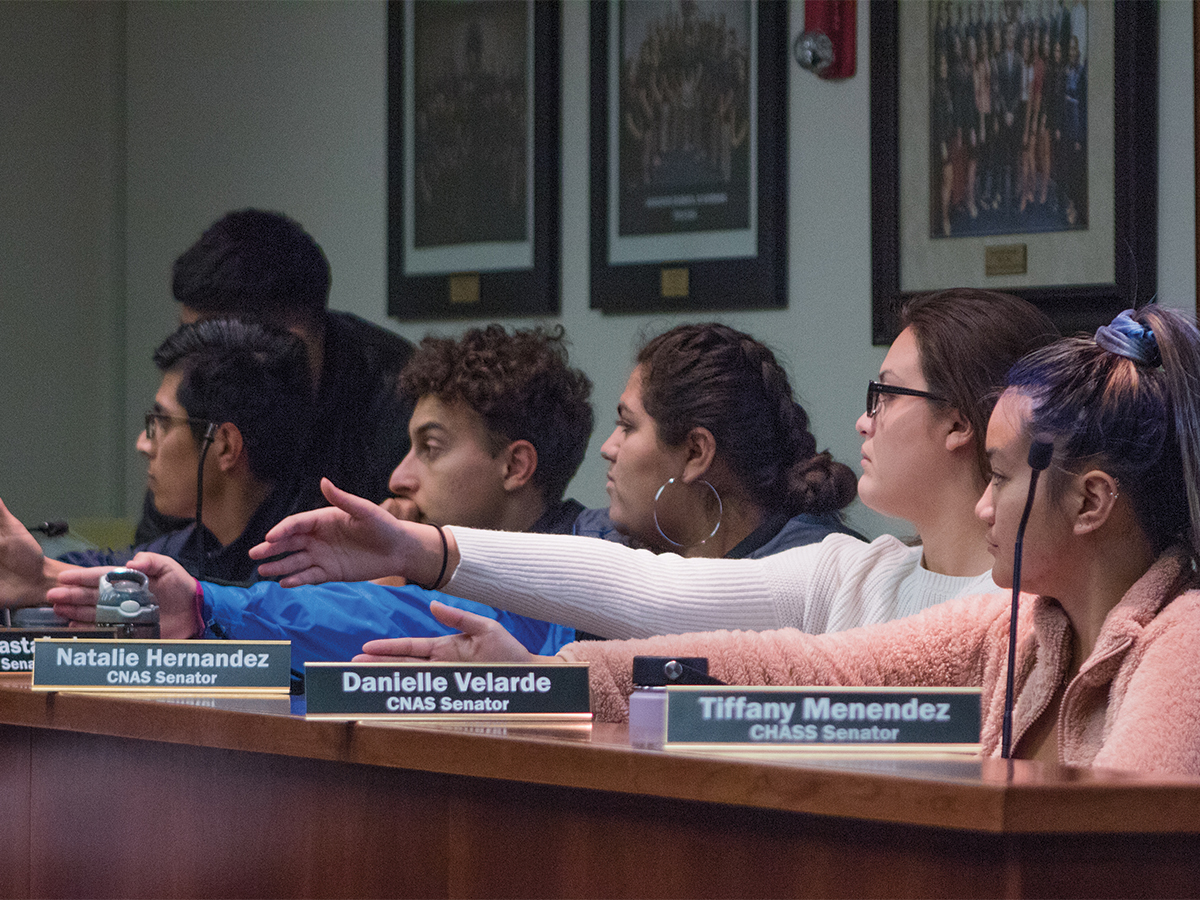 On Wednesday, Nov. 20, ASUCR held their second State of the Association Meeting of the quarter. ASUCR executive cabinet members discussed what projects they have been working on or completed so far this quarter.

The meeting then moved on to the Legislative Review Committee reports. Six pieces of legislation were passed. The first piece titled SB-F19-012: Expanding Legislation Requirements for ASUCR Senators proposed that the number of senate sponsors on a senate resolution be expanded to three primary authors instead of two. GSOE Senator Evelyn Castaneda noted that this bill would change the number of primary authors on a senate resolution but not on a senate bill. The bill was passed 13-0-0.

SB-F19-013: VPCIA Commissioner of Mental Health Bill was then presented by Vice President of Internal Affairs Jocelyn Ortiz, who explained that this bill would edit Section 8, Commissioner of Mental Health of the Vice President of Internal Affairs’ bylaw to state that, “This position description shall be rewritten during spring 2020 in conjunction with the AVC of Health, Counseling and Wellness after final departmental assessments and restructure have been completed.” Ortiz explained the reason for this change is because, “We have a new vice chancellor of student health and wellness Denise Woods. She is reevaluating the mental health program on campus. She wants us to hold off on this committee until after winter quarter so that they can evaluate where ASUCR can help.” The bill was passed 13-0-0.

The next bill the LRC went over was SB-F19-014: Amending Chapter V to Revise Policy on Travel Contract Reimbursements which would correct a conflict in Chapter 5 of the ASUCR bylaws. The bylaw states that travelers shall not be reimbursed for expenses paid on behalf of others. Each traveler needs to provide individual receipts for their own expenses. Receipts must be submitted within seven days to coincide with ASUCR policy per Part V, Section A. This bill would fix a conflict in the bylaw in which one section previously stated 21 days but should have said seven. The bill was passed 13-0-0.

The senate then discussed SB-F19-015: Amending Chapter VI to Keep a Record of ASUCR Committee Members. This bill was originally intended to keep a record of all committee members within ASUCR. However, President Pro Tempore and Public Policy Senator Preeti Juturu stated that in the bylaws it states that the Personnel Committee needs to vote on any changes to their bylaws prior to being presented to the LRC. Juturu also stated that in Chapter 6, Section 2, Part 3 of the ASUCR bylaws, it already states that the Personnel Director must compile and continuously update a list of all ASUCR committees and committee members and submit to the Executive Director each quarter for recording and eligibility purposes. The bill was then tabled with a vote of 14-0-0.

SB-F19-016: Enacting Chapter LII: “The Highlander Pride” Committee was then presented. This bill would reinstate the We Are Highlander Pride Committee under the Personnel Director’s bylaw, which was previously accidentally deleted. The motion passed 15-0-0.

Two members of the Office of External Affairs presented SR-F19-003: Resolution in Support of CalFresh Awareness and Registration Efforts. This bill would provide information sessions to educate students about the CalFresh program and how to register for it. The bill was passed 15-0-0.

The Elections Director then presented a report on the proposed 2019-2020 elections timeline. On Jan. 15, referendum and initiative applications will be due. On Jan. 22, pro/con group applications will be due and filing for candidacy will open. Files for candidacy will close on Feb. 14. The campaigning period will take place from March 3 to March 24. Voting week will take place from March 20 to March 24. Election results will be announced on March 29.

Elections Director Dyanna Castaneda announced that instead of holding the traditional candidate debates, the Elections Committee proposed that they hold a Senator Open House on March 7 and an Executive Branch Open House on March 14. Castaneda stated that the reason for this change is that, “The debates are often polarizing and I think that an open house is more effective. An open house or tabling is much more personal.”

This announcement prompted debate from the senate. President Pro Tempore and Public Policy Senator Juturu stated that her concern with replacing debates with an open house is that it presents problems for students who are running without a lot of exposure, such as underclassmen, and that the candidate debates allow students to get that sort of exposure. Castaneda confirmed that candidates would still be able to give speeches at the open house to present their campaign and platform to students in attendance.

BCOE Senator Maurice Armstrong agreed with the Election Committee’s decision to replace the debates with an open house. Armstrong stated, “Not a lot of people from the student body actually show up to the debates. Even if people are there they are not actually analyzing what you’re saying. The only exposure the debates really get is through The Highlander but not everyone reads it.” Armstrong also stated that it is the candidates responsibility to table and campaign in order to gain exposure.

ASUCR President Julian Gonzalez then stated, “I disagree with those who are stating that debates are not effective. Debates allow people to verbally hear a candidate’s platform … I think debates are much more effective than going up to someone’s table at an open house just so you can get an incentive of a slice of pizza. Debates are valuable and what makes ASUCR special and professional.” After debate, the motion to approve the elections timeline was approved 13-2-0.

The meeting then moved on to Officer Reports for the second State of the Association Meeting of the quarter. Transfer/Non-Traditional Director Eric Calderon announced that he is proud of his committee for tabling on Mondays and Tuesdays. He stated that he believes that his committee will continue to table for the rest of the year to ensure that they have the best outreach to transfer and non-traditional students.

Personnel Director Luna Sebastian stated during her report that they will no longer be accepting senator reports from senators if they are submitted past the deadline. She asked senators to stay on top of their reports and to submit detailed reports. Sebastian stated, “Keep yourself in check before a student from the public comes up here to remind you guys to do your job.”

President Gonzalez stated during his report that two new committees were created that the ASUCR president must sit on: the UCPD Campus Advisory Board as well as the Commencement Committee. He also stated that the furniture and appliances for the senate chamber remodel were ordered and delivered and to expect construction to be happening soon.

During Public Comment, GSOE Senator Castaneda expressed her disappointment with the lack of ASUCR attendance at the Native American Student Programs 5k run. She stated, “I asked you guys to attend the event for support and some of you even personally told me that you would come. I feel horrible telling NASP that you guys would be there and none of you showed up.” Castaneda also stated that she felt like ASUCR members are ignoring her in their GroupMe group chat while they answer other members promptly.

The meeting was adjourned at 8:14 p.m. There will be no ASUCR meeting next week.