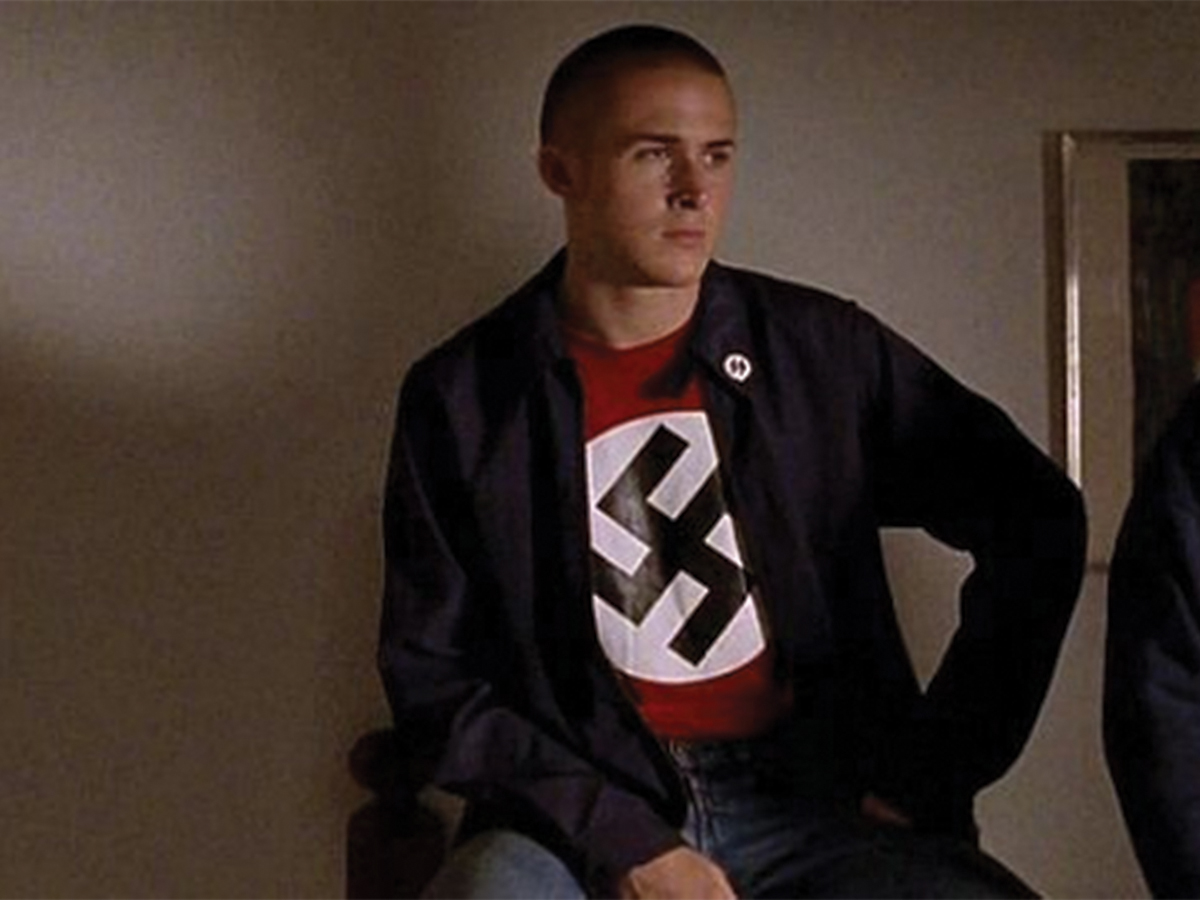 Ryan Gosling stars in 2001’s “The Believer” as Daniel Balint who, after rebelling against his ultraconservative Jewish upbringing, becomes a neo-Nazi in contemporary New York City. The character is based on the 1960s real-life member of the American Nazi Party Dan Burros. Balint joins a fascist movement and quickly rises through the ranks as his skills as an orator and his natural charisma became immediately apparent. Brilliant but beset by self-hatred and self-loathing, Balint has flashbacks to his early childhood that show him in Yeshiva school, arguing to his fellow middle school classmates that God is a bully who only asked Abraham to kill his son because he’s a jealous king obsessed with having total authoritarian control over his subjects. Burros’ militant atheism leads him down a path of fascism and Nazism.

Burros, motivated by hatred towards his own Jewish heritage, shot himself in 1965 when a New York Times reporter wrote an article about his Jewish background. The reporter had intended the article to be a way out for Dan Burros, as public statements made in the past to the press had indicated how trapped Burros felt in the racist movement.

The film asks a hard question: are all people deserving of a path back to redemption? Dan Burros struggles as he attempts to find his way back to Judaism. Caught in the crosshairs of his two conflicting ideologies he performs “sieg heils” while reciting Hebrew prayers. He and his skinhead followers vandalize a synagogue, but he stops them from destroying a Torah scroll and a Tallit Katan explaining to them that it would be disrespectful to Judaism to do so; instead, he decides to take both home with him. As he continues to attend his fascist meetings, he wears the Tallit Katan underneath his clothing. He reconnects with old friends from Yeshiva, who all know about his Nazism, and they question him as to whether he would really want to kill his own people. This film, despite its controversial premise, is not an advocation that we should forgive or forget the racist things people say or do. Rather, it is a lesson that all people should keep an open dialogue even when the other side says something or does something that offends us to our very core. All people have the ability to change and evolve, to be better than the day they were before. The day that we stop believing that is the day we fully give ourselves over to violence as the only methodology.

It is easy to say that forgiveness is a philosophy based on moral grounds but it’s also important to consider the strategic value of forgiveness. Turning the other cheek can be a valuable asset to defeating your enemies. In one of the final scenes of the film Ryan Gosling, having reimmersed himself into Judaism, makes a speech to a room full of wealthy fascist donors, pleading with them that the only true way to defeat one’s enemies is to love them and integrate them into society. Only when you love your enemy have you truly defeated him.