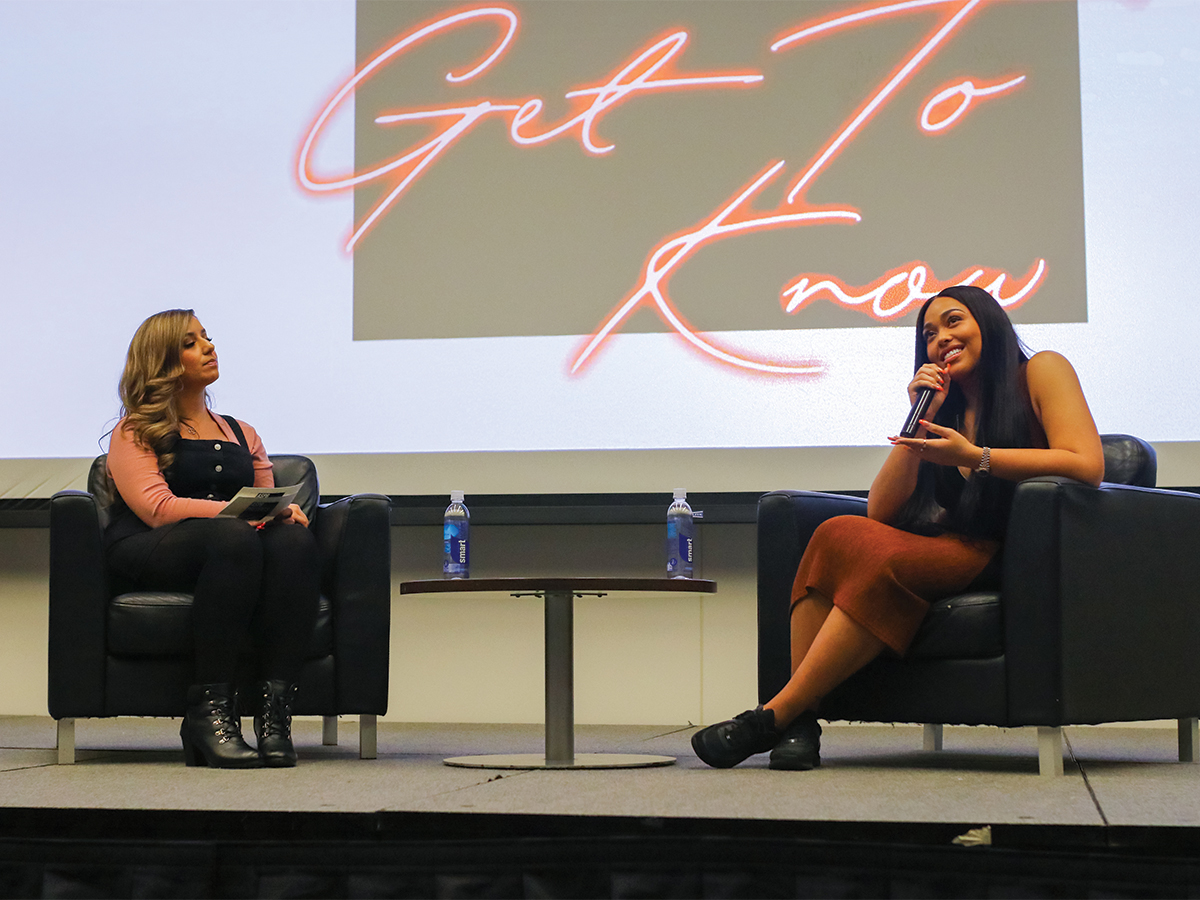 On Tuesday, Jan. 21, ASPB hosted their second lecture in their “Get to Know” series in HUB 302. The “Get to Know” series is similar to meet-and-greets and ASPB hosts these events so that a celebrity, or a media influencer, comes to speak exclusively at UCR. Last quarter, ASPB brought Kenny Beats, an American music producer. This quarter, ASPB presented the UCR undergraduates with the well-known Instagram influencer and model, Jordyn Woods. This event was the first time Jordyn Woods would be speaking to college students.

Carolyn Wu, a fourth-year business administration major and ASPB vice person explained they brought in Woods because “We thought it was cool to bring her out … to hear their story.”

Students were able to stand in line starting at 7 p.m. They eagerly waited with their R’Card in hand as ASPB members gave out admission bracelets. With the guidance of ASPB volunteers and directors, hundreds of undergraduate students safely entered the hall. Wu remarked that the event had a high turnout, stating, “We did not anticipate this many people coming today and it was a lot more than Kenny Beats.”

Although the event was supposed to officially start at 7:30 p.m., it began at approximately 7:50 p.m. Before Woods was called to the stage, the event started with trivia questions about Woods, which successfully acquired audience participation. The last question in particular sparked a wave of hands to go up. “What is Jordyn Woods’ astrology sign?” The MC on stage picked an excited fan who correctly answered, “Libra.”

Once Woods entered from behind the hall, people immediately recognized her; as she walked up to the stage, many students began to take pictures and videos.

Once the loud, booming excitement settled down, the interviewer started with the first set of questions regarding her history and how she started modeling. A modeling agency reached out to her when she was 15 years old. “I never thought I would end up modeling, I think modeling found me,” Woods said.

During Woods’ interview, she admitted that she is on the “bigger” side compared to most models, such as the ones for Victoria’s Secret. “I’m a curvy girl. I’m a curvy model. I was shy and modeling made me connect with people and it was an opportunity to show them who I am,” stated Woods. Woods also shared the awkward moments of being a plus-size model. “When I was asked to wear a fat suit, it was awkward,” Woods explained. “I’m authentic about myself. And I have fun with everything I do.”

When Woods was asked what advice she would give to people who want to enter the modeling industry despite not fitting the standard size mold, Woods replied, “You have to be okay with rejection. The modeling agency has a vision for you. You can’t do what you want. But I’ll never sell myself short. I was offered a lot of money to do things that I didn’t want to do.”

The next portion of the interview shifted the attention to how Woods dealt with the media and the narrative they formed around her. “I learned that they control everything. I wouldn’t believe what you read on the internet. I’ve seen more negative things than positive things, and as consumers we love that stuff. I was laughing too when I was reading these,” Woods replied as she chuckled.

The conversation transitioned to what Woods reveals to the media, and most of the time she tries to keep her private life away from the public’s knowledge. “I don’t show who I am all the time but the stuff I say gets taken out of context. I do censor some of the stuff I say but what you see and hear is what you get.”

Woods then discussed some of the hate she has received throughout her career. Someone once said “she has a personality of a toilet seat.” This short anecdote sparked a sympathetic laughter from the audience.

Then, Woods discussed the way she overcame these trials and adversities: “I really found myself with my relationship with God at my darkest time. I understood what I had to go through, and I realized there’s a reason behind why all of these things happen.” On top of the scandal, Woods experienced her father’s death about three years ago. She shared how she strongly believes that how much money you have doesn’t determine if you’ll face less problems.

Woods finished off the interview with some pieces of advice: “Mind your business and drink your water. Wash your face. Don’t sleep in your makeup. Do what makes you happy. Don’t care about what people say.”

As the event came to an end, Woods walked down the stage to take photos with her fans.  Before the event, ASPB took to social media with a post revealing how a few lucky students could get the chance to meet Woods personally afterwards. The first five people in line were automatically guaranteed the opportunity to meet her while others were given a chance through a trivia knowledge game about Woods during the lecture.

Many admired Woods’ messages on body positivity and look to her as a role model. Ravi Ranawaka, a fourth-year political science major, gave his take from Woods’ event: “I really loved the fact that Jordyn talked about mental health and how that affected her body image as someone who struggles with body issues myself.” Ranawaka added, “The ways that she found out how to love her and her body was just inspirational to me.”

Ranawaka had come with a friend, Megan Pineda, a fellow fourth-year political science major, because they were quite keen on what message Woods wanted to spread to college students. “I really liked her advice saying ‘mind your business’ and ‘drink your water’ because a lot of people in this world want to put you down and get mad when you succeed,” Pineda said. “Sometimes you just have to think about yourself and be on your own grind and not care about what other people think.”