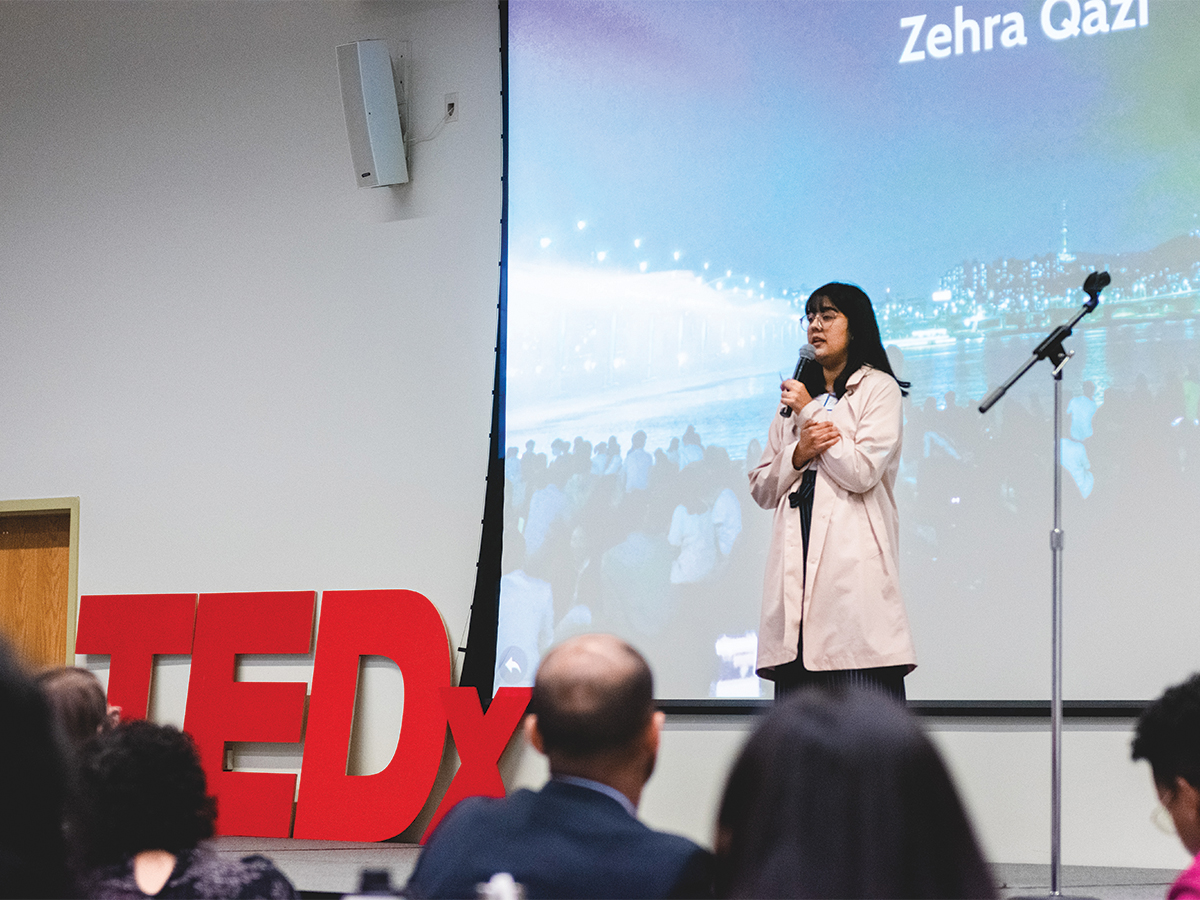 At approximately 6:45 p.m on Thursday, Feb. 20, the Highlander Union Building (HUB) opened its doors to kick off the Global Perspectives TedxTalk presented by the ASUCR International Student Committee (ASUCR ISC) and TedxUCR.

The event was sponsored by CHASS Senators Nelson Huerta and Tiffany Menendez and the Vice President of Internal Affairs Jocelyn Ortiz.The event was compiled of guest speakers and both international students and domestic students who have experienced studying abroad.

ASUCR ISC and TedxUCR organized this talk in hopes of opening up “the audience’s views regarding global perspectives that come in an array of unique voices, backgrounds and cultures,” which was noted in the pamphlets being distributed to audience members as they arrived.

The event officially began at 7:45 p.m. with a welcoming introduction by Channy Park, the chair director of ASUCR as well as the UCSA international student affairs officer, who was joined on stage by the President of TedxUCR, Jeff Wang.

Park and Wang’s introduction ended with a welcome for their first speaker, Zehra Qazi.

Qazi, a senior public policy major with an emphasis in the social, economic and international policy of the Indian and Korean Peninsulas, faced the audience which included her parents who were sitting in the very front, expressing their support as she began to speak.

She explained that her interest in studying abroad first sparked when she took a class on globalization. Although born in Pakistan, Qazi noted her ancestry derives from India and this became crucial in deciding what program she wanted to participate in and where. Ultimately, Qazi decided to study near the Indian and Korean Peninsulas, where she got lost on her first day of arrival. Qazi briefly studied and practiced the Korean language prior to her departure which became a crucial tool in her experience in a foreign country.

Her message to members of the audience was that although it is possible to get around by only speaking English, she highly encourages those who plan to study abroad to learn as much of the language of that place as possible. Qazi explained that not only does knowing some of the language become extremely useful once you are there but learning another language is an experience in itself that everyone should at least try.

Two other guest speakers, Chandi Solanki and Ryan Beal, also shared their experiences studying abroad. Both speakers stated that they are hoping to influence the audience to reevaluate their perspective behind the risks and fears of studying abroad.

At 7:40 p.m., the first intermission occurred and the audience was invited to eat dinner that was catered by Subway. After dinner, the event shifted into discussing the experiences of international students. One of the speakers was Stephanie Chuquipul, a third-year international student from Peru majoring in economics and administrative studies.

Instead of describing her experience in order to persuade the audience to go abroad like the other speakers, Chuquipul discussed mental health and its stigmas that affect all students, whether they’re international or not.

She explained that although her experience in the United States has been mostly positive, she has also had to face issues, like homesickness. Chuquipul is most often reminded of this when her peers inform her that they will be going home for the weekend, something very common amongst domestic students whose families live nearby.

Chuquipul stated that she unfortunately does not have the option to go home for the weekend, but she said that she is thankful to be surrounded by a support system that has allowed her to deal with her mental health issues accordingly. She stated that she is an advocate for the Counseling and Psychological Services (CAPS) department on campus and the R’Pantry stating that, “there is nothing wrong with asking for help.” Chuquipul’s talk was followed by four other guest speakers also drawing upon their experiences as international studies in this country.

Following the second intermission that occured close to 9:00 p.m., the audience heard from David Asplund and Shoma Atsumi to discuss life after college. After a brief discussion panel, the event officially closed around 9:30 p.m.