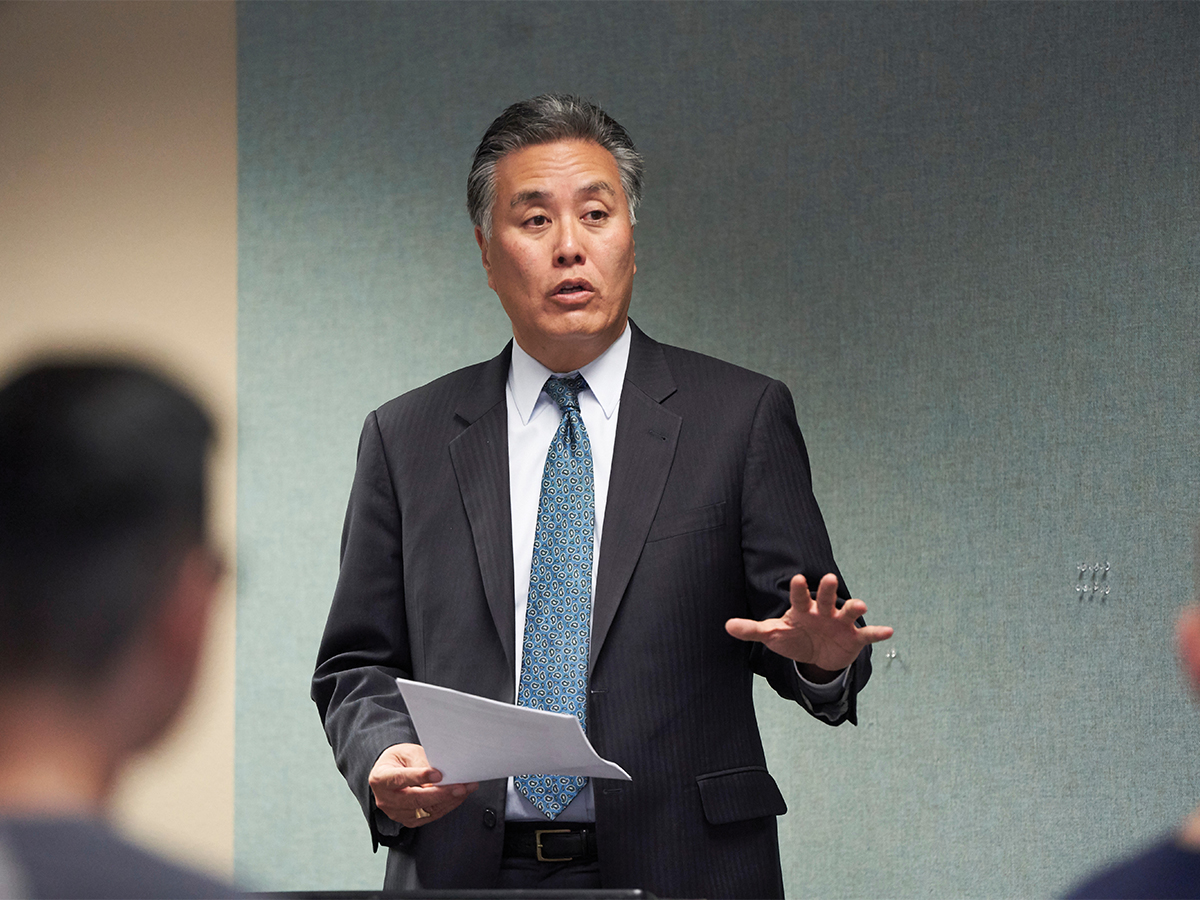 The event was opened by Al-Alami, who introduced Takano. The event began with remarks by Takano and a Q&A session that focused on basic needs for college students and legislation that relates to higher education. Alba moderated the Q&A portion that took place at the end of the event.

Al-Alami introduced Takano as a member of the House Education and Workforce panel and the Chair of the Veterans Affairs Committee.

In regards to basic needs, Takano spoke about the issues with food and housing insecurity within the college school system. Takano said that he was told by the Chancellor of Riverside Community College Wolde-Ab Issac that their student survey showed that 18 to 19%  of their students are housing insecure. Takano elaborated that the survey defined housing insecurity as temporary housing which meant that in many instances, students were sleeping on someone’s couch or in their car.

Takano addressed the importance of the Basic Assistance for Students In College (BASIC) Act that is currently being processed by the House of Representatives Education and Workforce Committee. He stated, “This legislation would provide grants to institutions to help conduct research in planning to reduce student food and housing insecurity.” Takano added that it would provide implementation grants to colleges to develop infrastructure for the basic needs of their students. Including free or subsidized food, temporary housing and access to more on-campus childcare. He added that it would also allow colleges to notify students about their potential eligibility and the process for applying to public assistance programs such as Calfresh SNAP (Supplemental Nutrition Assistance Program) or Height Vouchers. Takano stated that universities have a responsibility to inform their students of their eligibility to receive help from these assistance programs. “I think the BASIC Act is a major step forward in addressing the housing issue for students,” said Takano.

Takano added that he and Oregon Representative Suzanne Bonamici attached a Reauthorization of the Higher Education amendment to the current College Affordability Act which required that colleges and universities inform students of their eligibility for SNAP. He mentioned that Congress also passed the new College Affordability Act (CAA) last October which lowered the cost for students and families to attend college. This amendment increased the Pell Grant to add $650 per student and Congress has created indexes that have the grant increase along with inflation.

According to Takano, the majority of Democrats in the House of Representatives have created America’s College Promise Act, which is a federal-state partnership to make all U.S. colleges more affordable. One aspect of the amendment would make community colleges in the U.S. tuition and fee free.

The CAA created an emergency grant program such as the Federal Supplemental Educational Opportunity Grants (FSEOG) that gives urgent help to students who might be food or housing insecure. Takano stated that there are too many students in the U.S. who are close to being in financial trouble and if they have a sudden emergency where they need money, then the FSEOG could help them.

He mentioned that the CAA is trying to end a policy which states that the college institution cannot receive more than 90% of their funding from the federal government, and if they do, they will not be eligible for funding. Takano stated that proprietary or for-profit colleges use this policy as a loophole to gain more money from their students and disregard the education aspect of their institution. These schools that function similar to a business as they are private and profit-seeking institutions. He said that if the CAA ends this loophole, then it could shut down these for-profit schools and prevent college students from being exploited.

The CAA also enhanced the debt forgiveness programs through having students work for the institutions that they are in debt to. Takano gave the example that if someone with college debt becomes a teacher in a low-income area and they teach for a certain amount of time, they can get their college debt erased. Regarding the college debt crisis, Takano said, “The support for students and families has become less and less and more burdens have been put on students and families.” He stated that he does not believe in free education. “I think you need to pay something, but no one should have burdensome amounts of debt,” said Takano.

Alba asked Takano whether he supports the current UCSC Cost Of Living Adjustment (COLA) student strike which is demanding higher living wages for graduate students. Takano stated that he supports the labor unions method of bargaining, but he won’t take sides in the issue.

Takano was also asked by Al-Alami whether the BASIC Act would be passed by the committee at the end of the year. Takano said that he did expect the BASIC Act to be passed, but he did not know when the committee would pass it. Rasso asked Takano on his thoughts about California’s Proposition 209 which goes against affirmative action and he stated, “I think we need to take into account historic information and how we judge a students background and experience. It matters that we have diversity in higher education.” Rasso believed that the most significant issue that was acknowledged in the discussion was the UCSC COLA graduate student strike.

Rasso stated in an interview with The Highlander that, “The goal of our session with Congressman Mark Takano was to establish a constituent-level relationship … It’s so important to remind and urge our elected officials of the ambition we must have in order to obtain our goals.”

Al-Alami said, “I brought Takano because I wanted students to have access to their member of Congress to ask about the concerns they had as students in Riverside, and as a way to promote some of the work my students have been doing on higher education advocacy.”

“As a student leader and legislative advocate, I think the event went extremely well,” said Rasso. Rasso stated, “I had hoped to enable more students to ask questions … There are several issues beyond higher education that impact our experiences … and I wish we had a larger focus on how we as students have the power to impact them.” Rasso said he wished the discussion had recognized the importance for students to vote.

The Highlander emailed Luis Huerta and Mark de Alba for comments but they did not respond before time of print.