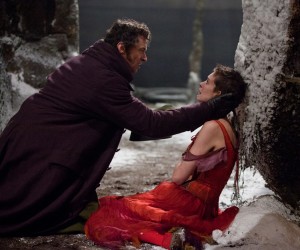 Director Tom Hooper’s (“The King’s Speech”) adaptation of “Les Miserables,” starring Anne Hathaway, Hugh Jackman and Russell Crowe, blows most other films of 2012 right out of the water in a display of incredible acting and risk-taking cinematography, topped off with a beautiful music score.

Based on the stage musical and Victor Hugo novel of the same name, the film follows the story of Jean Valjean (Jackman), who is incarcerated after trying to steal a loaf of bread for his impoverished family. He attempts to escape from prison four times, which lengthens his sentence to 19 years and fuels the contempt of policeman Javert (Crowe). When Valjean is eventually freed, he steals silver from a kindhearted bishop who, instead of turning him over to the authorities, says it was a gift. From then on, he is inspired to lead a moral life, and eight years after breaking parole and assuming a new identity he becomes the mayor of Montreuil-sur-Mer. In this city, he meets Fantine (Hathaway), who must resort to prostitution after losing her job. She is unable to care for her daughter Cosette (Amanda Seyfried), so Valjean takes the girl in and raises her as his own. Although Valjean hides his criminal past from his ward, they both become involved with French revolutionaries and join them in the fight to end the monarchy.

Hooper takes a unique approach to the musical by having the cast sing live during filming rather than lip-sync prerecorded tracks. Though some of the vocal clarity was lost, it proved to be worth the extra emotion the actors were able to display firsthand. This effect, accompanied by an incredible orchestral score, added great drama to some of the film’s most passionate moments. One cannot forget the relationship between Cosette and Marius (Eddie Redmayne), her prospective lover and leader of the French revolution. Both Seyfried and Redmayne displayed extraordinary vocals and dramatic skill in their coy longing for each other.

The film’s unique, if sometimes over-dramatic, cinematography is not to be overlooked; dynamic  angles conveyed the chaos of certain situations. Sweeping shots of the city gave a great impression of 19th century France, and the mise-en-scene, especially during more upbeat numbers, helped create a sense of frantic fun. In the midst of all the drama, comic relief was brought to the table by Thènadier (Sacha Baron Cohen) and Madam Thènadier (Helena Bonham Carter), who housed Cosette briefly before Valjean took her away. Their facial expressions, physicality and amusing mannerisms while singing added genuine laughs to an otherwise histrionic musical.

Though the film was brilliant overall, the length—at 158 minutes—could hinder some audience members from enjoying the film from start to finish. At times, the cinematography added unnecessary melodrama to scenes where the singing should have been the focus. Even with its few detriments, the high moments in this musical film truly outweigh the low points and more than make up for them. Anne Hathaway’s rendition of “I Dreamed a Dream” alone is worth the price of admission.

“Les Miserables” should be a heavy hitter this award season. Jackman and Hathaway in particular both deserve Oscars for their tremendous emotional depth throughout the film, and I fully expect the feature to be in the conversation for Best Picture.