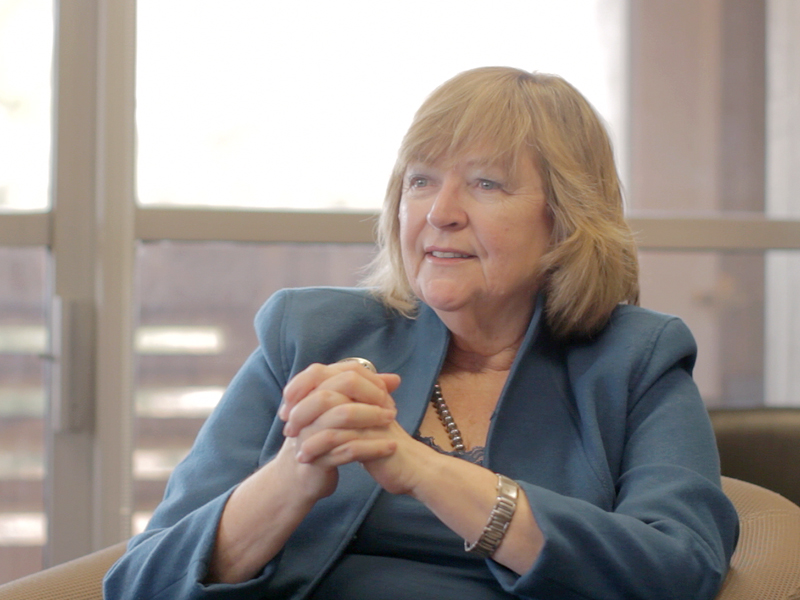 Just three weeks into her tenure as UCR’s interim chancellor, Jane Conoley sat down for an interview with the Highlander Jan. 22 and detailed her first impression of UCR, the impact of state funding on the campus and its comparable attributes to UCSB. Her aspirations as chancellor gravitate toward realizing the goals of the UCR 2020 strategic plan, including the C-Center expansion and UCR’s admission into the Association of American Universities.

Temporarily leaving her UCSB position as dean of the Gevirtz Graduate School of Education, Chancellor Conoley described what she called a smooth transition to the campus. “What surprised me was the natural beauty of the campus. Having spent seven years in Santa Barbara, I thought, ‘Well, I’ve seen a beautiful campus.’ But I’m looking out the window now and it’s fabulous with the layers of hills and snow on the mountains,” said Conoley.

UCR and UCSB both have similar sizes in student enrollment, yet UCR has nearly 200 fewer faculty members and a more fluctuating history of campus leadership, compared to its sister campus. Henry T. Yang has served as UCSB’s chancellor since 1994. The UCR 2020 strategic plan states, “Although rapid growth has occurred in recent years, in many ways the campus has retained a small campus feel, with a strong sense of community.” Earlier versions of the plan depicted ballooning student enrollment disproportionate to faculty departments, which grew sluggishly over the last two decades.

Despite the dissimilar trajectories in each university’s history, Chancellor Conoley was certain of UCR’s prospective rise in prominence, especially based on efforts made by former Chancellor Timothy White in establishing the UCR 2020 strategic action plan.

“I think Chancellor White put our campus on that kind of path. Now we have a plan—now we know where we’re going. The train’s left the station, so it’s time to jump on to reach certain levels of excellence,” said Conoley.

During her first week in office, Chancellor Conoley had already begun making big changes by splitting the Vice Chancellor for Finance and Business Operations (FBO) office into two positions: administration and planning & budget. The Office of Resource Planning and Budget will be removed from the department and fall under the office of the provost.

Playing a decisive role in other areas, Chancellor Conoley will push for the development of the C-Center, which will be constructed to replace Bannockburn Village over the course of the next two decades.

“I see [the C-Center as] an important driver for student enjoyment of campus [while] promoting the success of our athletics program and very importantly bringing the community to UCR because when people come here they’re going to love it,” said Conoley, who holds strong commitments to athletics, much like her predecessor White had.

With a shift in discussion from faculty to campus support, Chancellor Conoley referred to Governor Brown’s preliminary budget as more of a “broad stroke.” She was unsure of its direct impact on UCR due to the UCOP rebenching policy—which levies an assessment fee of 1.6 percent on all campus expenditures and controversially included student funded programs and services.

“The change has been we get to keep more of what we generate ourselves…but we pay a tax back to our system level, so that part’s in flux [and] it’s still unclear,” she said.

With $10 million set aside for new technologies and online education, the earmarked funds in the proposed state budget have sparked discussion of expanding the UC’s web-based catalog. Chancellor Conoley expressed her desire to provide an online option for every “bottleneck” course that often reaches maximum capacity, develop transferable systemwide courses and encourage a more “transparent” system throughout.

During her term as chancellor, Conoley plans to ensure the successful continuation of all campus operations while adequately addressing the issues of most concern to the student body. “I’ve spent my career as a psychologist, professor and administrator, but I got into this because I loved the idea of figuring out how students could learn best. I’d like to hear and believe that we’re in this together,” stated Conoley.