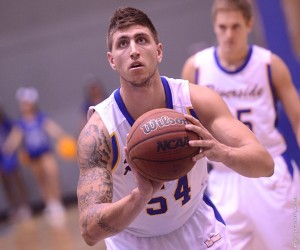 The Athlete of the Month for January is men’s basketball forward Chris Patton. This year the production from Chris Patton has been stellar for Riverside as he has developed into the Highlanders’ go-to guy. The 6 foot 10  junior from Melbourne, Australia is in his first year as a UCR student-athlete.

Against Cal State Fullerton on Jan. 12, Patton shot a season high field goal percentage of .889 (8-9). A couple days later, UCR hosted UC Irvine and Patton would go on to tie his career high again with 21 points with four rebounds.

In the same game, Patton made his season high in free throws with seven, going 7-7. During the month of January, Patton has logged an average of 28 minutes a game, which has resulted in a few more season highs along the way.

This season he leads the team in points per game with 12.4 and second in the team for  rebounds per game at 5.6. His best game of the season came at home Jan. 17 against Long Beach State when he posted his career high in scoring with 21 points while grabbing seven rebounds.

As a key post presence, he has been essential in keeping the Highlanders competitive in many games with his scoring, rebounding and his defensive presence. But while his offensive numbers are impressive, he is still a force on defense—he is a big body and can alter shots when opponents penetrate the lane.

Last year he played at Neosho Community College in Kansas where he was a first team all conference and a second team all region selection. He was rated #106 out of the top 150 Junior College recruits in JucoJunction. He played at the College of Southern Idaho with Baylor’s superstar point guard Pierre Jackson in 2010.

His hard work, activity and toughness has shown every game. The physically imposing center has been a consistent contributor for the Highlanders on both sides of the court and he will only get better as the season rolls along. For his hard work on the court, Chris Patton has earned the Highlander’s Athlete of the Month for January 2013.