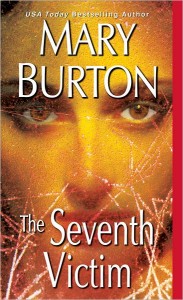 What ignites a serial killer’s white-hot insanity? Is it the simmer of anticipation, bided time and fevered obsession? Mary Burton’s “The Seventh Victim” explores this concept through the terrifying exploits of an unknown assailant. He preys on young blonde women standing at the peak of their lives, and photographer Lara Church is the one that got away…for now. That sounds like a fantastic hook in concept, but in practice “The Seventh Victim” just barely misses its mark. It’s good, but not great.

We begin from the perspective of an unnamed killer, crouched over Lara’s unconscious body on the side of an interstate highway. He’s ready to strangle her to death, but a passing motorist foils his plans. Of a string of six sexual assaults and murders at the hands of the infamous Seattle Strangler (whose name may or may not sound like a pro wrestling maneuver), Lara is the only victim to escape.

This is still the case seven years after the attack, as we shift to Austin, Texas. Lara has lived a nomadic life throughout the country, trying to escape her traumatic past, but when the Strangler returns—this time in San Antonio—Texas Ranger James Beck takes on the case. His life is intertwined with Lara’s from the get-go, and what ensues is a high intensity plot to stop the killer before he can return to Lara and finish the job.

Beck is a standout character; he is a gruff, steak-loving manly man who lives for his job. His no-nonsense dialogue and steady character development, which we see through his relationship with Lara and his grandfather, make him believable, likeable and safe. On the other hand, Lara is a weary shadow of her former self; since Seattle, she has crafted a tough veneer of sarcasm and self-defense, and her first meeting with Beck features a showdown between his gun and her rifle. Their character strengths play into one of the best aspects about this novel: the romance between Lara and Beck. Burton crafts enough sexual tension to blue-ball a porn star, but their relationship develops slowly without overshadowing the overarching mystery surrounding the Strangler’s identity. Sex is easy, but good writing is Burton’s overall goal.

And in many ways that goal is met. Burton excels in creating palpable tension set against a backdrop of cowboy hats and Texan toughness, which we really see when the Strangler reenters Lara’s life and begins edging closer into her life and home. During our brief snapshots into the mind of the killer, a few choice elements, such as the red journals he maintains to chronicle each of his kill, add to the novel’s moments of unease. But for all its merits, the plot loses its credibility toward its end.

Burton was already walking a thin line by giving Lara amnesia. She has not been able to remember any details about her attack since Seattle and struggles to recall what she had seen that had caused such lasting trauma. I gave Lara the benefit of doubt, but when she is suddenly able to remember key facts during her first hypnosis session with Beck in the room, things fell apart for me. It was too easy and I didn’t buy it. And when Beck and Lara finally hook up, Lara’s sudden sexual ease doesn’t feel true to a traumatized victim of violent rape and assault.

Craft-wise, I feel that Burton should not have made Lara’s first encounter with Beck so eerily perfect. During their sex scene, Beck seems to reflect this sense of disquiet when he asks if Lara is sure she wants to take things to the bedroom. “Oh, so sure,” she tells Beck, shrugging off her bra with ease. Given the fact that their sex scene arrives after a particularly traumatic episode for Lara, the scene feels incongruent and untrue to her character.

Similarly, the addition of a second murderer in the novel’s last 50 pages feels rushed, as though Burton wanted to put as many twists into the end of the book as possible. Clocking in at 416 pages, I think that Burton could have afforded at least another few pages into developing the second murderer in place of some excessively on-the-nose dialogue between Beck and his fellow Rangers. After Lara is attacked for the third time (Or was it the fourth? Fifth? I lost count. She was having a bad day), the violence feels totally absurd.

I know that Burton is a strong writer; the intricacy of her latest novel proves it. But the second half of the story reads like an early draft that still needs some solid development, and until then, I’m placing the book on the backburner. Overall, “The Seventh Victim” is a good weekend read, but it won’t blow your mind.