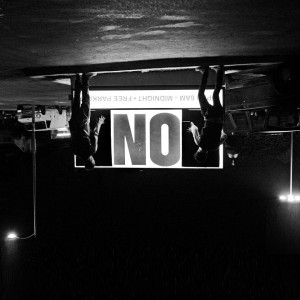 Now that the Coachella lineup madness has died down a bit, it’s time to turn my attention to an up-and-coming band. This week’s spotlight is on the Echo Park-based indie band NO. They have released only one EP (“Don’t Worry, You’ll Be Here Forever”) to date, in addition to a single, but they have already shown great potential. Self-described as “post-hymnal anthematic,” NO falls somewhere between the anthemic qualities of Coldplay and the dreary vocals of The Smiths, while bearing similar sounds to The National.

I recommend the entire record, but the songs “Another Life,” “There’s a Glow” and “Stay With Me,” are particularly strong. Despite the series of despondent-sounding synths and vocals, the band somehow makes the songs uplifting through strong backups and emotional content. NO will reportedly be releasing a new album in the near future, so keep an eye out. For a free download of their EP, visit their Bandcamp.

In other news, the Grammys (a.k.a. everyone’s favorite dog and pony show) will be happening Sunday, Feb. 10. Now, this year definitely features some deserving nominees; among them are Mumford and Sons, Jack White, fun. and Frank Ocean. But one must question the credibility of voters who would nominate the previously listed artists, and also decide to nominate the tween summer hit, “Call Me Maybe,” for Song of the Year.

Listen, I hear you: it’s definitely catchy, but catchy can’t be the sole factor in being nominated for a “prestigious” music award. The same goes for “Stronger (What Doesn’t Kill You)” by Kelly Clarkson. Correlation does not imply causation, and just because a song is popular does not necessarily mean it’s great. Even Passion Pit’s “Take a Walk,” (which can thank Taco Bell commercials for its popularity—oh look, it’s popular! Shiny things are nice!) is not innovative in and of itself, but it is far more stimulating and unique than Clarkson’s and Jepsen’s drab (ahem, catchy) pop tracks.

It seems as though one half of the voters has their heads on straight, while the other half is caught in the glam of shiny Billboard numbers that blind their senses to any truly unique music. That being said, this was a good year.  In my opinion, fun.’s “Some Nights” should win Album of the Year, but I would be happy to see any of the category’s nominees win. As for Song of the Year? Hopefully what doesn’t kill these voters’ credibility makes them stronger—they could certainly use it.