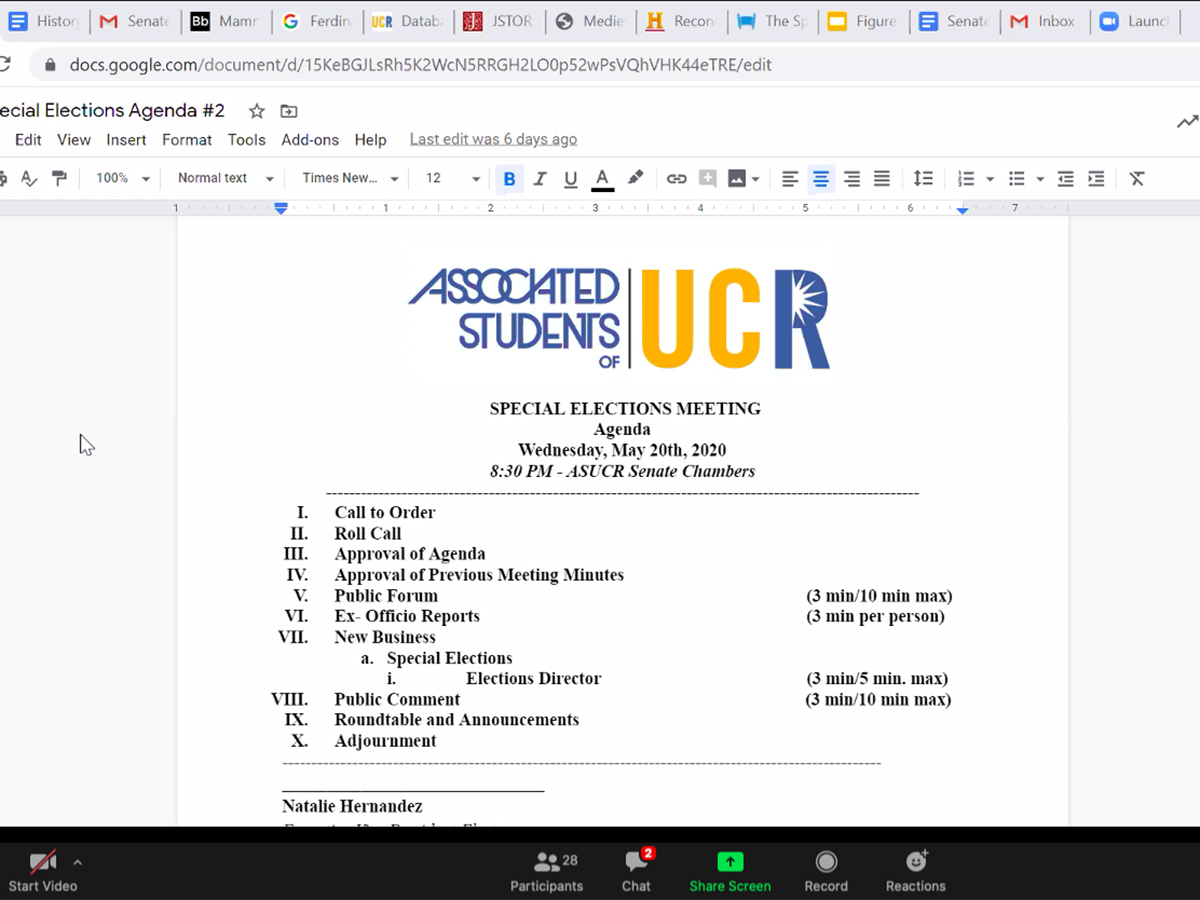 At the ASUCR meeting held on May 21 at 6:45 p.m, the Legislative Review Committee (LRC) presented SB-S20-005 regarding revisions to the Commute and Transit Committee tasked to tackle transportation related issues on campus.

SPP Senator Emily Thomas presented the bill, stating that she and President Pro Tempore Miguel Ramirez had recently met with Transportation and Parking Services (TAPS) Director Irma Henderson to come up with the new requirements. Per the revisions, at least one student from each college is required to be represented in the committee and all committee reports should be updated and uploaded onto the ASUCR website. SB-S20-005 passed with a vote of 12-0-0. The senate meeting was adjourned at 6:58 p.m.

During his speech, Nguyen discussed his plans to ensure that ASUCR is held to an ethical, moral and administrative standard. “As elections director, I am committed to holding a free and fair election,” stated Nguyen, adding that he would put his personal beliefs aside to do so.  During this year’s ASUCR elections, Nguyen ran for the position of personnel director and stated that he noticed some discrepancies and areas of improvement for future election cycles that he would like to address.

Nguyen discussed his plans to create an elections guide that would assist candidates who are trying to navigate the electoral process. This guide would not only answer any questions new candidates may have, it would also increase transparency and lay out the rules and regulations of the elections code that candidates consent to when campaigning, stated Nguyen.

Nguyen addressed questions from the incoming senate including his experience with previous elections, stating that he previously served as a campaign intern for the 2016 presidential election, which allowed him to understand the electoral process. CNAS Senator Abigail Nguyen posed a question about his plans to ensure that students from all colleges are voting. Nguyen stated that throughout his term, he would emphasize outreach and collaborate with the leadership from the different colleges to do so.

During deliberations the senate unanimously discussed Nguyen’s integrity and passion for ASUCR as well as the importance of having an impartial elections director. Nguyen was voted in as the incoming elections director with a vote of 15-0-0.