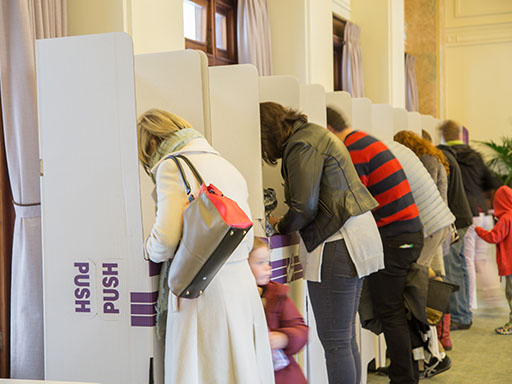 The UCR Civic Engagement Coalition is an alliance of students, organizations, faculty and departments working together to elevate student voices. They recently formed and are a non-partisan group focused on providing every student with the opportunities and resources they need to contribute to their communities.

In an interview with The Highlander, members of the coalition discussed their goals as a group, the importance of collaborating with various campus departments and the impact that students can have on their own communities in Riverside and beyond.

Emily Thomas, a third-year public policy major and civic engagement director for ASUCR, stated that the goal of the coalition is to align campus departments’ civic engagement to increase their outreach and hopefully teach students about the census, the upcoming election and give them the tools to understand their local city governments. Ria Mavinkurve, second-year economics major, and another member of the UCR Civic Engagement Coalition added, “We strive to create a long lasting culture of civic engagement not just until November, but beyond … for the rest of UCR’s future, we want to promote a culture of getting involved and using our voices.”

The UCR Civic Engagement Coalition came together as a direct result of the UC Student Association’s (UCSA) UC We Vote campaign. “The goal for UC We Vote this year was to create vote coalitions to engage students on social media to ensure that students on our campuses knew the information that they needed to be able to vote effectively and efficiently,” stated Thomas.

So far, the coalition has combined efforts with CALPIRG, ASUCR,  ASPB, Student Life and the Civic Engagement Workgroup led by faculty and staff to collaborate ideas and promote the work of the coalition through their various social media platforms. The coalition is also working on eventually collaborating with other UC campuses.

Another goal of the coalition is to ensure that they are inclusive in their efforts to promote social engagement. “We understand that voting is a privilege and we understand that it’s not accessible to everyone but we want to make sure that folks know that there are other ways to get involved,” stated Mavinkurve. Some of these examples include being counted in the 2020 Census, demanding action from your local representatives and organizing in your communities.

Lilly Romero, second-year psychology and education major, discussed how being involved in the civic engagement efforts at UCR gave her the learning tools she needed to demand action from her representatives back home in the Bay Area. “I don’t live in Riverside, but through the committee I’m only just now realizing that my local government is pretty important too,” stated Romero. In her community, Romero became aware of a mayoral candidate who proposed the decrease of special education funding; being that she has a sister with special needs, Romero felt that it was her responsibility to advocate for her. Romero added, “Students aren’t aware of how powerful their voices are.”

Students can get involved with the UCR Civic Engagement Coalition by following their Instagram page and signing up for their email list to gain access to more information as well as weekly meeting invitations. The coalition will also be hosting a civic hour every Wednesday at 11a.m. via Instagram Live. Additionally, on Tuesday, Oct. 21, they along with ASUCR and the School of Public Policy, will host a Riverside mayoral candidate town hall between Patricia Lock Dawson and Andy Melendrez.