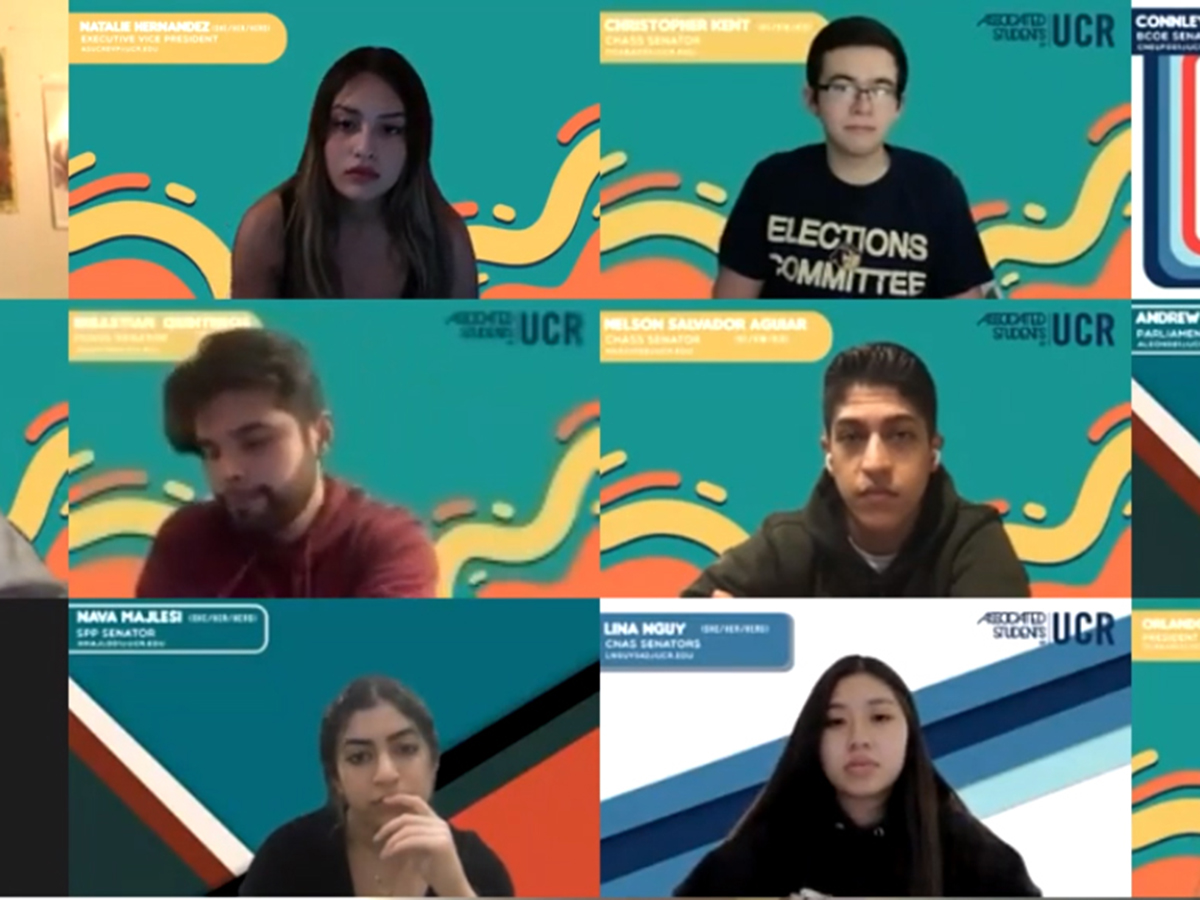 On Friday, Nov. 13 ASUCR held their second State of the Association (SOTA) meeting of the year, where ex-officios are able to share their reports for the past month.

Vice President of External Affairs, Vincent Rasso, shared that this month, his office met with UC President Michael Drake and received commitments from the UC Office of the President (UCOP) to advocate for the continuation of lenient academic accommodations for students. They also discussed their short and long term plans to ensure campus safety and the issues with policing on campus, along with the impact that budget cuts have had on UC workers. As part of Rasso’s contributions to the UC Student Association (UCSA), he also assisted in the creation of systemwide statements about the failure of proposition 16 and the election of Joe Biden. He also highlighted the Election Day events hosted by his office and other university organizations such as the UCR Civic Engagement Coalition, Student Life, ASPB, the School of Public Policy and CALPIRG.

During public forum, Ori Liwanag, fourth-year business major and vice chairperson for CALPIRG at UCR, gave an update on their upcoming events and initiatives. Liwanag stated that CALPIRG will be hosting a week of actions to go along with national hunger and homelessness awareness week. Liwanag highlighted the 2019 College and University Basic Needs Insecurity: A National #RealCollege Survey Report released by The Hope Project titled. The survey revealed that 45% of 86,000 respondents were food insecure in the prior 30 days, 56% were housing insecure in the previous year and 17% were homeless in the previous year.

During New Business, SR-F20-004 Proposition to Mandate Recorded Lectures was presented. The resolution is aimed towards convincing the academic senate to mandate recorded lecture for all classes. Primary author of the proposition, CHASS Senator Lizbeth Marquez stated that the purpose of the resolution was to alleviate some of the stresses brought on by the coronavirus pandemic, especially for international students who are currently facing their classes in a different time zone. “We are hoping students can have access to their course material when it is most feasible to them,” stated Marquez. The resolution passed with a vote of 15-0-0.

The senate also passed SB-F20-007 to add a clarification to chapter 53 of the ASUCR email policy. Currently, ASUCR utilizes ScotMail to distribute mass emails to the entire campus and the bill clarified the regulations that the association must follow when sending emails en masse.

ASUCR President Luis Huerta presented his monthly report which included his meeting with the Athletics working group to discuss the future of the athletics department as well as his role on the Campus Safety Task Force to discuss new approaches to policing on campus.