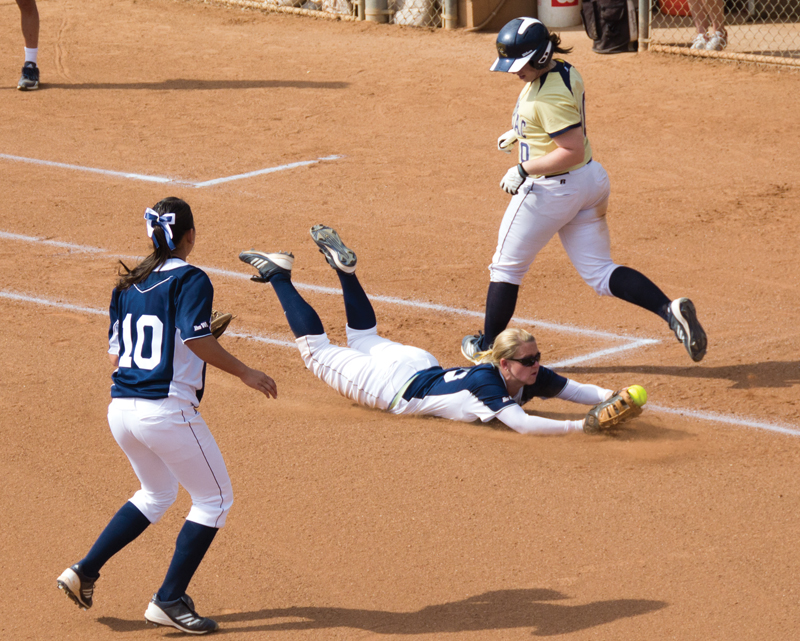 Facing off against a top nationally ranked athletic program is rare for Highlander Athletics. But the women’s softball team got the opportunity as it met #1 Oklahoma Feb. 15  at the Campbell/Cartier Classic in San Diego, Calif. Overwhelmed and undermatched, UC Riverside was pummeled by the Sooners en route to a 7-0 defeat.

As the opening bells sounded for the game, the bats of the Highlanders had difficulty finding their target as eight of their first 10 at-bats resulted in strikeouts. By the time UCR struck their first hit in the fourth inning (a Dionne Anderson single), Oklahoma had already crossed the plate three times. In the same inning, Riverside recorded their second and final hit of the day as Ashley Ercolano sniped a ball up centerfield. However, another strikeout silenced their best shot at a score.

The Sooners, who remain undefeated at 6-0, smothered the Highlanders’ offense and defense. They tacked on runs in the fourth, fifth and sixth innings to dispose of UCR, 7-0.

Oklahoma pitcher Michelle Gascoigne dominated the game as she struck out 16 players while limiting UCR to an abysmal two hits.

The tough times continued for the softball team as the Highlanders held their own early, but couldn’t weather a seven-run inning by #22 Kentucky in an 11-3 loss.

Riverside got on the board first when Ariel Shore raced around the plates and finally reached home on a Wildcat error at the bottom of the first inning. After a scoreless second inning for both clubs, the third saw excitement injected into San Diego State Stadium as both teams’ offense heated up.

Not to be outdone, the Highlanders sent the morning crowd into a buzz as Marissa Escalante stepped up and connected on a pitch for a homer. She watched the ball soar over the post tying the game at 3-3.

With the score tied at 3-3 going into the fourth, Kentucky put on the pressure and earned another run behind a Joiner triple to push their lead to 4-3. Riverside didn’t respond as it quickly surrendered the fourth inning and struggled to find its form.

The Wildcats (8-2) then showed why they are ranked #22 in the nation as they produced a seven run inning in the sixth that completely decapitated UCR’s chances of a comeback.

Riverside’s pitchers struggled at the mound as a plethora of Kentucky batters found success including two RBI’s by Kentucky pitcher Lauren Cumbess. The Highlanders finally stopped the stampede when Alice O’Brien fouled out with the Wildcats up by eight, 11-3.

UCR (2-5) failed to score at the bottom of the sixth and were saddled with its second loss of the tournament.

The UC Riverside softball team played its first game of a doubleheader Sunday Feb. 17 against the #18 University of Washington Huskies. They fought hard but winded up with a 0-8 loss.

The Highlanders lacked offensive production as only one UCR player, Dionne Anderson singled through the left side of the field in the fifth inning. Later she would steal second but would be left stranded as her teammates were unable to drive her in.

The UC Riverside softball team finished its weekend tournament against the San Diego State Aztecs en route to a 1-9 loss.

The Aztecs jumped on the Highlanders early when they scored two runs in the first inning. Then the following inning San Diego State tiled on two more runs in the second for a 4-0 lead.

Riverside was able to score one run in the third inning but that would be it. The Highlanders allowed three runs in the fourth inning for a 1-7 deficit. To make things worse, Riverside let the Aztecs extend the deficit to eight runs when they gave up two more runs in the sixth.