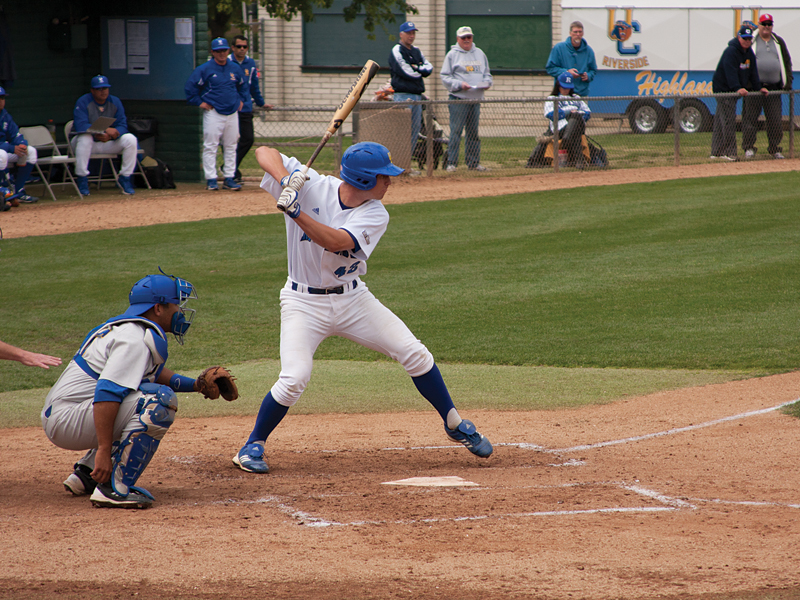 UC Riverside started its season off on a rocky note losing 3-6 as Gonzaga jumped all over Riverside’s starter Dylan Stuart. Stuart was tagged for five runs with a little more than five innings pitched. Riverside experienced defensive lapses throughout the game, overworking its pitchers and giving Gonzaga extra outs.

Stuart started the top of the first inning in dominant fashion, striking out Gonzaga’s first batter Mitchell Gunsolus. However, Stuart would then give up a single, then a double to the number three hitter Clayton Eslick to put runners on second and third. Bulldogs Zach Abbruzza and Marco Gonzales both singled to make the score 2-0.

Riverside was unable to score in the first inning. Gonzaga returned in the second inning and scored on an error made by Riverside first basemen Clayton Prestridge. Back-to-back singles helped knocking in the unearned runner to increase the lead 3-0.

Stuart managed to settle down and limit the damage, retiring batters in the third and fourth innings while Riverside’s offense lay dormant. In the fifth inning David Andriese dropped a ball that resulted in Bulldog Abbruzza knocking in two more runs.

Gonzaga’s Tyler Olson kept the Highlanders scoreless through five innings while striking out seven. Riverside finally scored in the seventh inning when Chavez crossed the plate on an Andriese sacrifice fly. UCR’s Joe Chavez and Prestridge both drove in runs in the eighth inning cutting the lead to two. Gonzaga scored on another Prestidge error in the ninth inning securing the 6-3 victory as Riverside failed to score in the bottom of the ninth.

After a loss to Gonzaga on the first day of the tournament, UC Riverside bounced back over Utah Valley in Palm Springs in an 8-7 victory. Riverside was carried by Phil Holinsworth’s three RBIs in the game and made a late comeback from an 3-5 deficit.

UC Riverside scored first after Smigelski retired the side in the first inning, allowing just one hit. Bottom of the first David Andriese drove in Clayton Prestige on a sac fly after Prestige walked and was advanced to second on an Eddie Young groundout.

Smigelski hit a batter to begin the third and the next batter doubled to have runners on second and third. The inning escalated when the Wolverines scored twice on an RBI single and a RBI groundout to bring the score 2-1 in favor of the Wildcats.

Holinsworth scored a run during the bottom half of the inning to tie the game up at two. The Wildcats and Highlanders would trade runs in the fourth to keep the game tied. However, the Wildcats scored twice in the fifth to take a 5-3 advantage.

Riverside was able to score two in the eighth inning to take a 8-6 lead, which secured the win for the Highlanders as the Wildcats were unable tie the game in the ninth to take it to extra innings.

The Highlanders suffered through an excruciating six-run first inning against the Oregon State Beavers en route to a huge loss, 3-14. This followed after a great come-from-behind win at Palm Springs Feb. 16.

The Highlanders started off the game in exceedingly rocky fashion, as starter Ben Doucette gave up four hits and three walks, allowing a total of 6 runs in the first inning. Riverside starter Doucette lasted just two thirds of an inning with one strikeout.

The Beavers scored 10 points for the second straight game and knocked the Highlanders around early and often.

Tyler Smith scored on a groundout to third by Beaver Gabe Clark after reaching on an error, giving the Beavers another run in the second. The Highlanders finally scored in the fourth inning, with three runs on an error and a groundout. The bottom of the fourth the Beavers countered and scored three more runs to extend the lead 10-3.

Oregon State also managed to tack on two runs in the fifth and sixth innings before ending Highlander misery after seven innings. Eddie Young led the Highlanders with two hits, including a double and a walk.