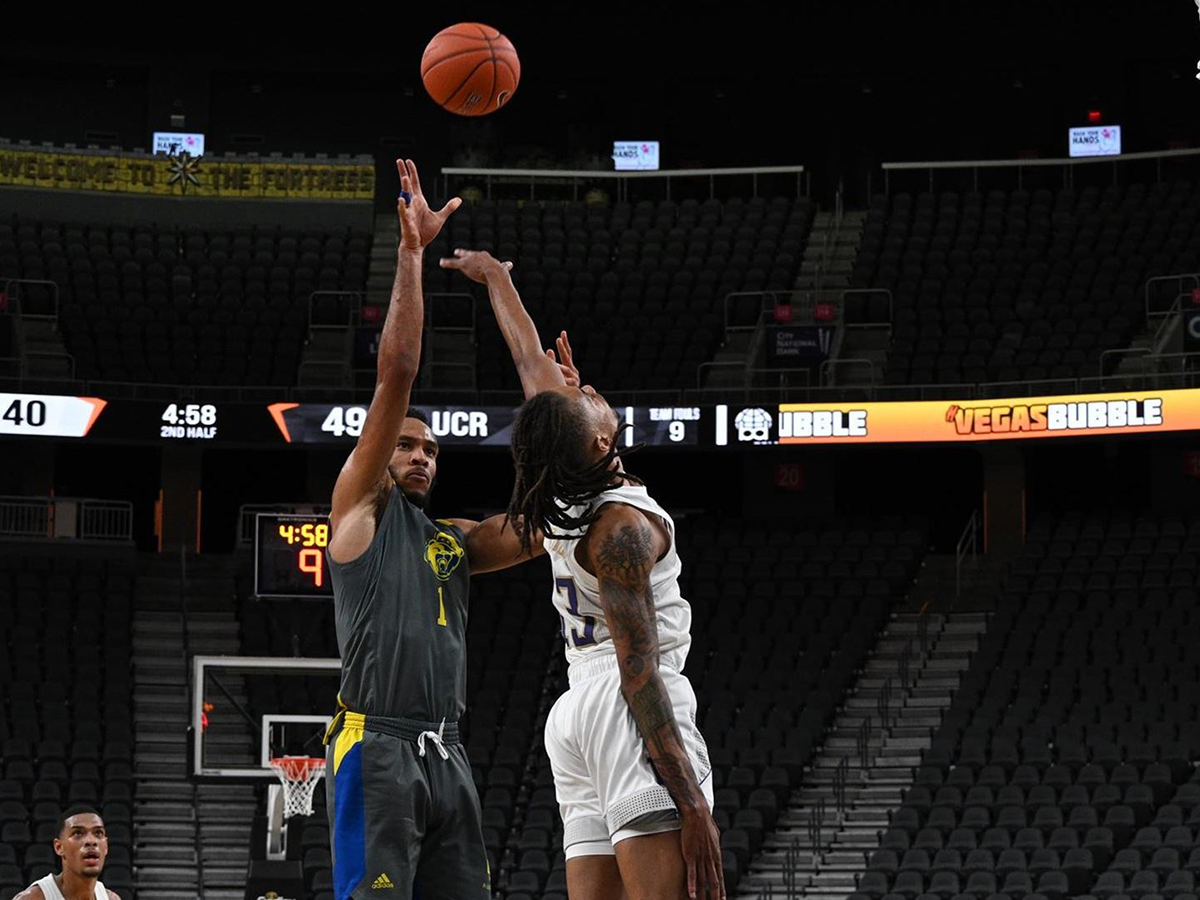 On Tuesday, Dec.1, Head Coach Mike Magpayo was greeted by a loud and rowdy locker room. The athletes on his team doused him in water to celebrate the history he had just made. Coach Magpayo is the first Filipino and Asian head coach to win a Division I game, and with this win, he has made his first career win as head coach. The Highlanders secured a victory against the University of Washington Huskies 57-42 after being narrowly defeated by the University of the Pacific Tigers. This face-off came as a result after Fresno State Bulldogs, UCR’s original opponents, had to cancel the scheduled Nov. 30 game due to a COVID-19 outbreak in the team. The game took place in the Las Vegas T-Mobile Arena. After a tough start last week against the University of the Pacific, the Highlanders demonstrated how deadly the team can be when implementing their defense and when they move the ball around.

Washington started with an immediate lead in the first minute of the game with a 3-point advantage, but UCR pushed back defensively. In minute eleven of the first half, junior guard Flynn Cameron received the ball at the 3-point line and dribbled towards the inside, passing the ball to an open Jock Perry. Perry leaped to score, extending the lead to 13-8. Perry, the Australian redshirt senior, posted a career-high total of 21 points. Around the halftime margin, the Highlanders had established a 7-point lead at 29-22. UCR managed to increase and maintain their lead throughout the rest of the game. The Highlanders’ top 10 defense of last season was demonstrated throughout the game, allowing only five defensive rebounds throughout the game.

With a minute left in the first half, sophomore point guard Zyon Pullin had the ball at half court. He passed the ball towards senior guard George Willborn, who then sent it to the corner towards Perry. Perry sank the 3, which gave UCR an 8 point lead at 30-22. UCR kept the Washington Huskies at bay throughout the entire second half. Senior forward Arinze Chidom set a career high total of 12 rebounds. Similarly, Pullin, Cameron and junior forward and center Angus McWilliams each totaled nine rebounds throughout the game.

It was not until the second half that Washington seemed to gain some momentum, as they went on a 9-2 run to cut the UCR lead to six, 44-38. In response, UCR had a 5-0 spurt contributed by McWilliam’s bucket and a corner three from Wil Tattersall on a possession extended by a Chidom offensive rebound. Combined, they were able to increase the lead to 49-38.

Their defensive aggression helped maintain possession of the ball, creating opportunities for the team which contributed to the win. With a little under two minutes left in the game, Flynn Cameron again gained possession of the ball after having received a pass from McWilliams. From behind the 3-point line, Cameron sank the 3 in order to put the Highlanders up 56-42. UCR closed off access to the opposing team, stopping them from scoring for the rest of the game.

After having missed the season-opening game to be with his wife during the birth of his son, Coach Mike Magpayo made history in collegiate sports. As the first Asian coach to win a Division I game, Magpayo was thrilled to lead this team toward their historic victory. This is surely just the first of many victories for the UCR Highlanders this season. Their next match will be in Denver against the University of Denver on Dec. 6 at 12 p.m.