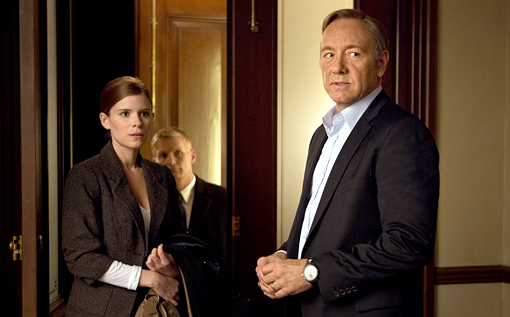 Witnessing a politician fumble over his own words is usually a comical thing to see on air, but it is no laughing matter when it involves congressman Frank Underwood.

Frank starts off strong in “Chapter 6,” but his overconfidence results in an uncharacteristic slip-up in an education bill debate with union head Marty Spinella (Al Sapienza). Al Sapienza is an exciting presence on screen and his acting is pitch-perfect. With Sapienza’s gripping performance and Spacey’s reliable portrayal of the sinister Frank Underwood, the pieces fall into place for an intense, private dialogue between the two feuding figureheads.

Behind closed doors, Frank and Marty’s discussion eventually evolves into an argument and provides Underwood with the ammo he needs to rid Spinella from his political life. However, Marty’s defeat means less screen time for Sapienza. This is unfortunate since Sapienza’s performance surpassed Spacey’s this episode, despite Spacey’s opportunity to bring his A-game to his character’s brilliant power play.

Aside from the education debacle, Underwood is in the midst of grooming congressman Russo (Corey Stoll) to become governor of Pennsylvania. Underwood has no problem convincing the Democratic National Committee to back the known drug addict. All it took was one smooth line: “What’s better then a blank slate in the right hands?” Apparently nothing, but this does make the audiences wonder if Russo is actually in the wrong hands.

Like Doug Stamper (Michael Kelley), Stoll is hardly given any screentime. He spends most of it acting jovial about the chance for his character to prove himself as a big shot in Washington. I remain hopeful that Stoll and Kelley will get more opportunities to showcase their acting talents as the series progresses.

Claire Underwood (Robin Wright) was also a delight during “Chapter 6” as she works with Russo to formulate a Watershed Act that could bring jobs to Pennsylvania. There was a particularly spellbinding scene that involved Mrs. Underwood and Frank’s previous security guard, Steve. He decides to confess his love to Claire while on his deathbed, but the congressman’s wife is not so easily charmed. Wright captures Claire’s headstrong nature as she responds with a very callous speech.

In “Chapter 7,” Peter Russo has a difficult time jumping starting his campaign for governor. The up-and-coming politician is unable to deal with his complicated past as it floods back during a confession with someone comparable to a political priest. Stoll is phenomenal as he embodies the character of congressman Russo, the man who can barely stomach his dirty personal history, and Russo will have a hard time winning over the public if his mistakes reappear before the election.

Luckily, Stamper is in charge of sweeping the Congressman’s past under the rug. Kelley is great here once again as he runs around Washington intimidating the police commissioner and paying off hookers.

But Russo’s past is not this episode’s only issue. Underwood has the job of swaying over the president (Michael Gill) and his chief of staff Linda Vasquez (Sakina Jaffrey). Gill’s character seems to be too easily convinced by Frank every time he presents what he terms “out of the box” ideas. Nevertheless, Spacey is charismatic enough to win over viewers as the episode gains more momentum.

Underwood has reporter Zoe Barnes trapped in the palm of his hand, but she decides to feed her knowledge of Russo’s bid for Governor to fellow reporter Janine Skorsky (Constance Zimmer). Mara gives a decent performance during this installment of “House of Cards,” but nothing on the same level as Stoll or Spacey. Zimmer’s supporting presence is sufficient since the significant cast members have noteworthy roles.

“Chapter 7” was a satisfying episode now that more focus is placed on congressman Russo. There is also an interesting development as the vice president finds himself ostracized by the president. One can only wonder what will become of him after Frank sucks him dry.