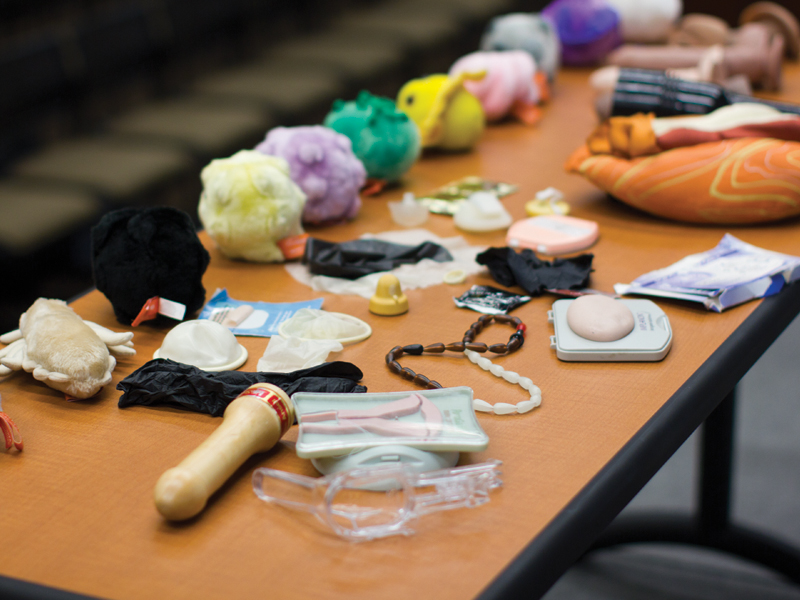 Students huddled into HUB 302 on Feb. 19 for what was not your average academic event. There was a particular question on everyone’s minds that they hoped the program would answer: how can I have the best sex ever? Before anyone could even behold the secrets of premier sexual abilities, a long row of tables holding a plethora of safer sex handouts that gleamed like that of a candy store greeted participants. People took as many condoms, lubricants, dental dams and safe sex kits as they could get their hands on, preparing themselves for the hopeful future of better sex.

Dr. Justine Shuey introduced the event with the phrase: “Individuals are sexual beings from birth to death.” I mean why else would there have been such a huge turnout to an event named “The Best Sex Ever”? Unless people were attending for a class assignment, everyone was looking forward to a little self-improvement.

Shuey, a certified sexologist, took a different approach and actually talked about the relationship between two people as an important concept before she even began to broach the subject of sex.  So if any of the participants wanted that hot steamy 10 minute sex scene with a complete stranger, Shuey said not to get your hopes up. Shuey suggested in the meantime to work on personal being and sexual awareness. Shuey gave advice on how there were components that made up an individual’s personal being: intimacy, sensuality, sexual identity, sexualization and reproduction.

Dr. Shuey broke sex down to what constitutes a better time in the bedroom by stating that there are three people in a relationship: you, your partner and the couple as a unit.  Each one needs work and Shuey aimed to help people understand her concept of basic human interaction.  Instead of taking the Cosmopolitan magazine approach, which worships body-contorting sex positions, Shuey favored a focus on understanding different aspects of a relationship.

For example, Shuey suggested to the audience that if participants want to spice things up in the bedroom, create a chart separated by three topics on what you would, might and would not do. Then try everything that overlaps. She said that you can’t stop trying after one bad experience. Give it three times. If it doesn’t get better by then, drop it.

Typically, when someone brings up sex in a co-ed setting, a common response is “Too much information.” However, at Best Sex Ever, this was not the case; Dr. Shuey opened up a forum where everyone asked their dirty sex questions through texting .

Shuey took on a different approach while talking about STD’s, one of the most uncomfortable topics in sex education, and completely turned it around. She brought stuffed toys representing STD’s which were very cute, appealing and fluffy. She then proceeded to throw out the Chlamydia stuffed toy to someone in the audience. When a participant caught the stuffed toy, she said, “See how easy it is to catch chlamydia?”

A major highlight of the night was this advice: “Don’t fake an orgasm girls, because you ruin it for the rest of us!” According to Shuey, anytime an individual lies about something feeling good, it just ruins the experience as well as his or her future lovers’ experience.

For Shuey, sex needs to have a solid foundation of trust and communication, in addition to all the intimate parts of being in a relationship.

This may seem completely obvious, but according to Shuey, many couples don’t apply these considerations to their own relationships. While some are completely silent as to what they really want under the covers, a little communication and honesty could drastically change an individual’s sex life for the better.