On Jan. 7, the College of Natural and Agricultural Sciences Physics Department hosted a virtual lecture with Dr. Varoujan Gorjian who works at the Jet Propulsion Laboratory (JPL). The JPL is a research facility aimed towards robotic space exploration and has launched missions, such as Mars 2020, that will look into surveying Mars.

Kicking off the event, host Xinnan Du welcomed attendees and introduced the chat moderators and solar system ambassadors who have been trained by JPL to communicate NASA’s exploration missions: Jess McKibben, Christine Hirst, Bryan Scott, Emmanuel Masonsong and Elena Semerdjian. It was very exciting to see people in the chat share their excitement for the lecture.

Dr. Gorjian went into detail regarding the origins of robotic missions from JPL, starting with a brief history. He discussed rocketry in the 1920s and 1930s which was interesting to learn about, considering how hard it was to produce rockets at the time. Once produced, rockets became a huge part in launching the first satellite and would eventually become the epicenter to NASA’s robotic exploration journey.

The first attempt of launching a satellite failed due to an explosion midair. However, in 1958, JPL launched the first successful satellite into space, which was the catalyst for President Eisenhower to create NASA. JPL began creating different programs to survey the moon in order to send astronauts there. As I was watching his lecture, I remembered the video of the first man landing on the moon, and it made me realize that I had never thought about how much research had gone into sending a human to space. It was very interesting to learn about.

Many people were commenting and interacting with Dr. Gorjian’s lecture, which was very refreshing to see. One attendee, Kyle Marston, stated that he was staying up “way past my bedtime for this, and [I] wouldn’t have it any other way.” It was heartwarming to witness and even more so knowing that the attendees were listening to his lecture and excited to learn.

Throughout the lecture, the moderators were taking note of questions put in the Zoom chat. At the end of the lecture, Du presented them to Dr. Gorjian. One such question was from Caleb Liu, who asked if there is snow on Pluto. Dr. Gorjian confirmed that Pluto does have snow, as it is covered in other kinds of material that have the ability to become icy and frosty. He explained it was a matter of what the temperature was.

Overall, this event was very informative and successful. I personally learned a lot about JPL and space in general. I found the way he was describing the space rovers to be endearing, and seeing the chat interactions definitely made my evening. The next lecture will take place on March 4. 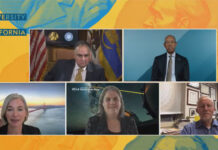