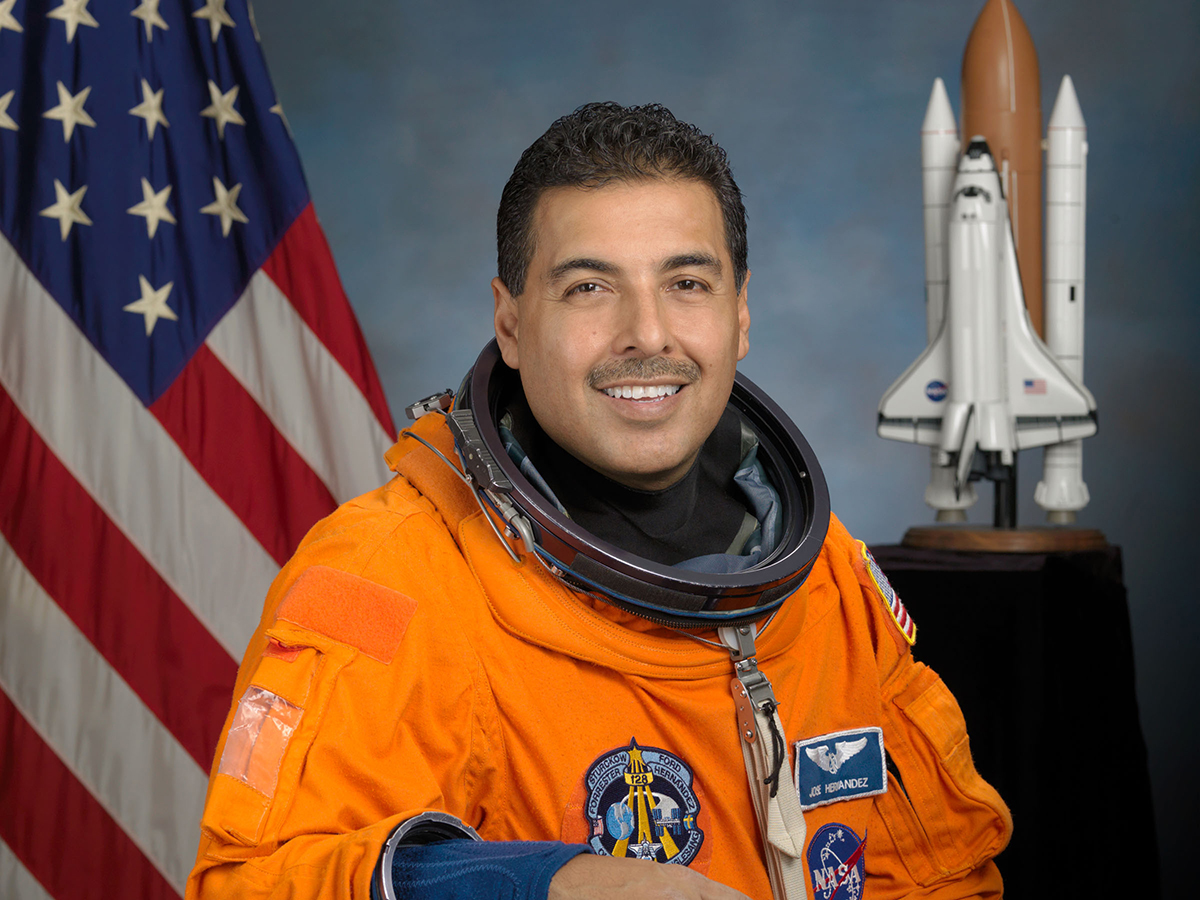 Hernandez’s journey into becoming one of the crew members of the 2004 NASA Astronaut Group 19 originated from a humble background. He was born into a farmworker family and was the youngest of four children. Every year, Hernandez and his family would spend nine months in the U.S. following the harvest and the remaining three months in Michoacan, Mexico. Hernandez knew he wanted to become an astronaut from the age of 10. He was inspired by watching the last moonwalk mission, Apollo 17, as well as the moonwalk and the corresponding coverage by journalist Walter Cronkite.

During the lecture via Zoom, Hernandez combed back through his memories as a young child. He recalled going to bed on the night of the Apollo 17 mission and telling his dad he wanted to become an astronaut. Later, his father sat him down in the kitchen and introduced Hernandez to some principles that shaped his life and ultimately helped him achieve his dreams.

First, his father explained that one needs to decide what they want to do in life then recognize the distance between the current point and the destination. Living in a rental in what Hernandez described as the worst part of Stockton, CA, he recalled saying, “Don’t get offended Papa, but I can’t be any further than this.”

Another principle his father instilled in him is creating a roadmap that outlines the steps it will take for one to get to their destination. For Hernandez, education was key. His father also told him that it was necessary to develop a strong work ethic in order to exceed expectations and rise above them. “Always give more than what people expect out of you. Always give more,” Hernandez recalled his father telling him.

Hernandez explained, however, that when he applied to become a NASA astronaut, a sixth principle arose: persevere and never give up. Before being accepted to the NASA astronaut program, he was rejected 11 times. By the sixth rejection, Hernandez was discouraged to apply again until his wife, Adela Hernandez, told him he would be a quitter. Hernandez adopted a new strategy.

By analyzing accepted applicants, he was able to identify the traits and characteristics that led to an acceptance status aside from the minimum requirements. After conducting research into applicants, Hernandez found that all applicants were scuba certified and had a pilot license. In addition, Hernandez looked to gain other skills that would make him attractive to NASA: he started by visiting Siberia, Russia in order to train and learn the language. Hernandez recommended that those who want to be an astronaut first research the minimum requirements and develop skills that would set them apart from the other applicants.

“You’ve got to enjoy the journey,” stated Hernandez. He elaborated by stating, “The journey is 90% of the time and effort. If you are not enjoying the journey, chances are you’ve got the wrong goal for yourself.”

In 2011, Hernandez left NASA to be with his family, and since then, he has founded Tierra Luna Engineering, which aims to “approach on aerospace, advance technologies and education outreach needs … in a sustainable and cost effective manner.”

Hernandez continued on and explained how NASA not only helped him achieve his life dream, but also prepared him to deal with the “new normal” that the COVID-19 pandemic has brought on.  When preparing to go into space, training in isolation is imperative, Hernandez mentioned.

The six main points in dealing with isolation, as he has learned, are having a positive attitude, communicating, creating a schedule, bonding with family, setting goals and practicing self-care management.

During the questions and answers portion of the lecture, Hernandez was asked about the future. He said he wants to open a winery alongside his father and is currently working to release a Netflix biopic outlining how Jose Hernandez, a kid from Stockton, CA, went to space. Filming is expected to begin later this year.