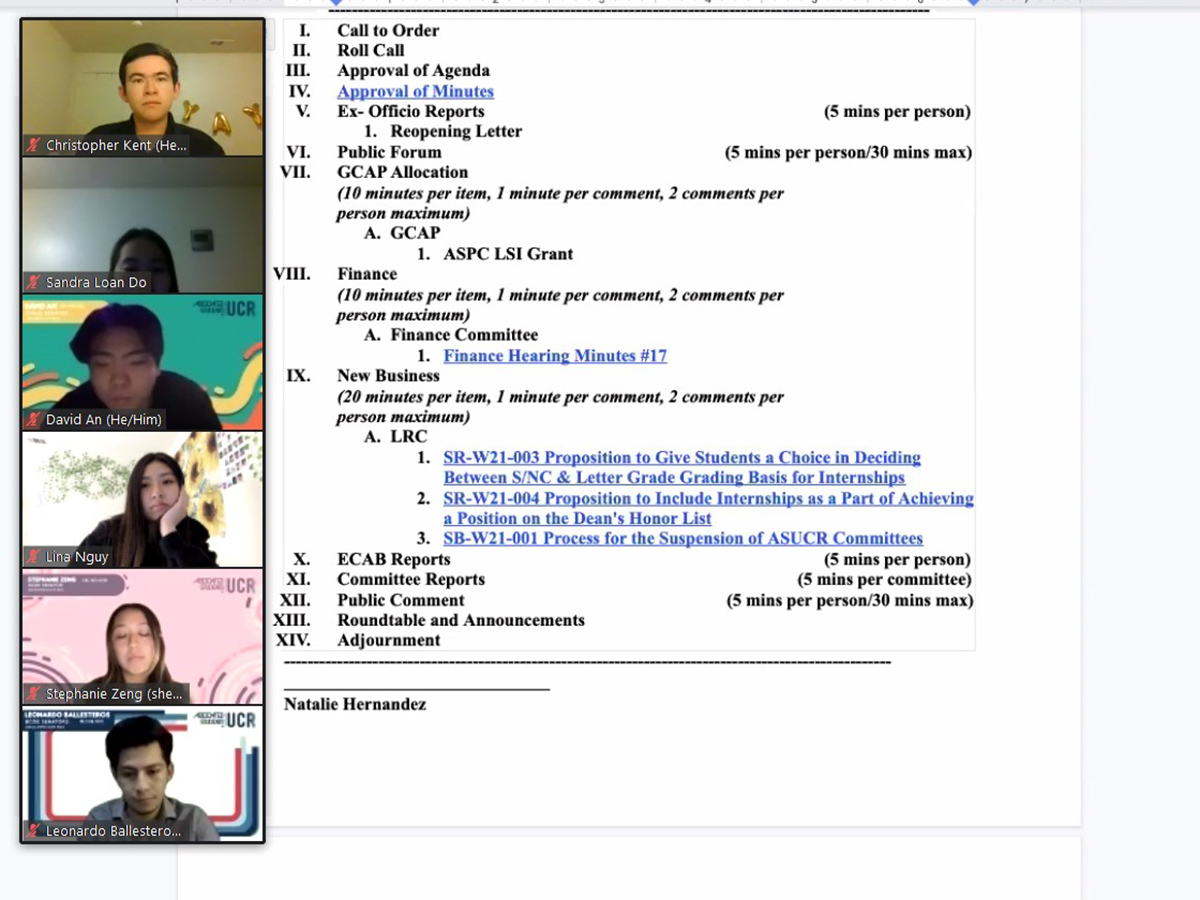 On Wednesday, Feb. 3, ASUCR held their sixth meeting of winter quarter where they discussed changes to the elections timeline, finance allocations and the addition of new positions within ASUCR. The Executive Cabinet (ECAB) also provided individual updates during the State of the Association meeting.

During Ex-officio Reports, Elections Director Lama Yassine extended the deadline to submit constitutional amendments and file for candidacy until Sunday, Feb, 21 in order to give international students a chance to run in the 2021 ASUCR general elections. Yassine stated that international students are waiting to approve a bill that will determine whether or not they are able to hold office within ASUCR.

During the Finance Hearing, Vice President of Finance William Wang proposed the allocation of three different stipends within ASUCR that all correspond with the upcoming constitutional amendment CA-W21-005 Constitutional Amendment to Add Three New Positions to the Extended Cabinet. The funding for the three positions is taken directly from ASUCR’s contingency budget. ASUCR Executive Director Laurie Sinclair explained that the organization’s contingency budget is a large pool of funds ranging from $50,000-$60,000 per year. This budget consists of funding from student fees, ATMs and vending machines on campus, as well as funding that is left over after everything in the yearly budget for ASUCR has been allocated.

The new positions would start off with a base yearly stipend of $2,980 and be allocated $1,000 for events and $200 for meetings throughout the year. The finance allocation was approved with a vote of 17-0-0.

Next, CHASS Senator Alyssa Marchan, CNAS Senator Barry Liu, Vice President of Finance William Wang and International Student Committee Chair Cristina Chen proposed CA-W21-005 Constitutional Amendment to Add Three New Positions to the Extended Cabinet. The purpose of the constitutional amendment is to separate the current Transfer and Non-Traditional Student Director position into two different job titles: a transfer student director and a nontraditional student director. Additionally, the senate hopes to add an international student director and a freshman student director. The purpose of the new positions is to better attend the needs of each group in a more targeted way by having a representative within ASUCR dedicated to serving them.

Vice President of External Affairs Vincent Rasso stated that oftentimes, committees representing international students and others alike have been very busy and working hard to make sure that the students they represent are taken care of. Committee positions are often unpaid. Rasso was in approval of the amendment, stating that he worked with the International Student Committee in the past and was impressed by their leadership.

During State of the Association announcements from ECAB members, ASUCR President Luis Huerta stated that ASUCR’s pending Black Lives Matter donation of $5,867 has been finalized on ASUCR’s end, and now it is up to the Black Student Union (BSU) and African Student Programs (ASP) to decide the best way to utilize those funds.

Vice President of External Affairs Vincent Rasso provided extensive updates on his work from the past month. Rasso discussed a letter that he drafted in collaboration with President Huerta regarding student priorities for the campus reopening in fall 2021. Rasso also discussed the UC’s recent campaign, Double the Pell Grant which aims to provide further funding to help low-income students pay for higher education.

Rasso also attended a meeting with UC President Michael Drake earlier this month and was unable to get concrete answers from Drake on the UC’s plans for campus reopening. Rasso stated that they were unable to have him commit to providing remote learning options for students come fall 2021. “There’s not really any sort of ambitious proposal from the UC to prioritize disabled UC students, or people in our community with underlying health conditions in the UC community,” stated Rasso. At the end of the meeting, Executive Vice President Natalie Hernadez named CHASS Senator Marchan senator of the month and praised her for the efforts in representing student-parents, nontraditional students and the UCR student body as a whole. “Senator Marchan always maintains a positive view regardless of current events that help her lift other people up and make it very fun to work,” said Hernandez.