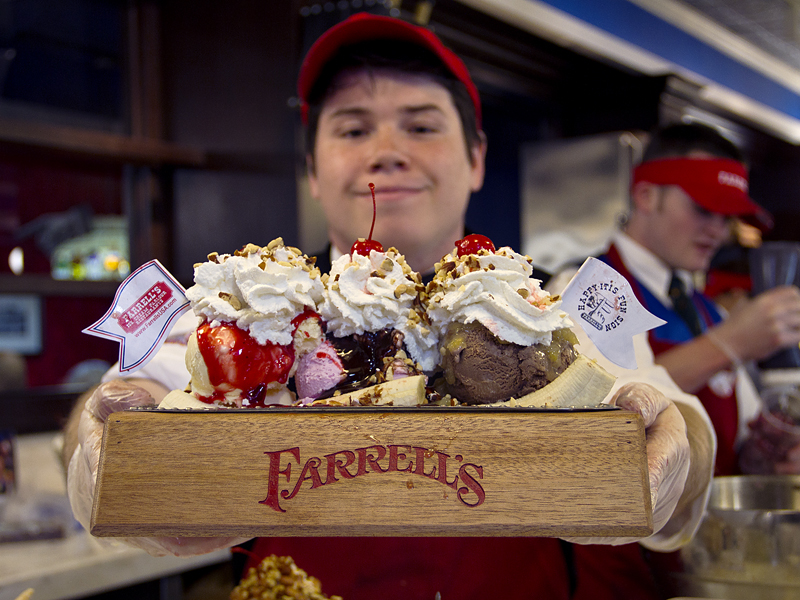 The front door to Farrell’s Ice Cream Parlor next to Castle Park in Riverside is a time machine that can transport any customer back to 1905. One step in and I was hit with a breeze of sugary sweetness. Resting upon the chestnut wall was an American flag ribbon encircling the entire restaurant, leading gazes all the way to the candy corner behind the entrance, making any sweet tooth tingle. I was then greeted by the hostess with a patriotic smile and a turn-of-the-century uniform to match. When she gave me the option of sitting at the ice cream bar or in the dining area, I chose the bar.

As I waited for the waitress, I looked over the newspaper-style menu and listened to trumpet tunes blaring over families’ conversations. I swiveled in the bar stool, trying to understand the menu as it held many options from classic hamburgers to pin-up entrees. Sparse as it is, Farrel’s does offer healthier choice such as salads and fruit substitutions.

However, nothing was more extensive than the array of desserts. Ice cream expectations are put to the test, as Farrell’s offers everything from single scoops of vanilla to ice cream nachos composed of waffle cone chips, mint chip, chocolate malt crunch and vanilla under a quilt of hot fudge, caramel, blueberries and whipped cream.

The fantasy of swimming in this ice cream sea was broken when I took notice of the prices. Farrell’s entrees range from $8.00-$15.00 and desserts $8.50-$13.00. But to start, I ordered the Reuben Sandwich ($11.50). The prices are definitely higher than the average dessert at Baskin-Robbins.

My nose followed the scent of bliss as I saw streams of chocolate ice cream placed on a bed of bananas and peanut butter. One of the definite perks of sitting at the bar was watching the artists create sweet art, crushing every craving. Once polished, the ice cream master tugged on a rope overhead, causing a train’s “choo-choo” ring my ears.

Soon after, my sandwich arrived. It was a classic reuben with thin slices of corned beef folded between sauerkraut and dressing smeared across grilled rye bread. The sandwich was substantial; it hit all the taste buds with richness as the peppered meat melted in front of the acidic undertone of the sauerkraut. Even though the rye bread acted as a blank canvas for all overbearing ingredients, it did leave a greasy shine on my fingers from the overuse of butter.

With the last bite, I shifted in my seat to make more room for dessert. With so many choices, I asked the attentive waitress what she would suggest. Her response of the triple chocolate brownie sundae ($8.59) cut the question short as fellow employees nodded. She took my loss for words as my compliance.

I peered over the bar to see the ice cream master tilt a brandy glass under a river of hot fudge, letting it cascade down the glass. He placed two brownie bricks in the chocolate pond and four vanilla globes followed. He finished with a barrier of fudge bars, a horn of whipped cream, a sprinkle of almonds and, with the finishing cherry at the peak, my mouth began to water. The golden grail floated towards me, along with four employees and a bass drum the size of the toddler next to me. The waitress and server then rapped “It’s Triple Chocolate Brownie Time” to the booming beat. I had no other choice but to fist pump and chest pop to the applauded ending. The waitress slid the dessert in front of me and explained they have a tune for each dessert ordered. I chuckled and thanked her for the warning.

As she left, I took a moment of silence, absorbing every detail of the dessert before plunging my spoon into its cavity. I got all components in one bite. The brownie sponge mushed on the roof of my mouth and fudge ripples made me look like my teeth were a victim of a flying hockey puck, but soon washed away with the melted vanilla bean. I broke off a piece of fudge and took in what smelled like the first day of summer. After making out with the chocolate seductress, I couldn’t help but wipe away the fudge lipstick and smile.

Farrell’s Ice Cream Parlor is a balance of casual dining and festive treats. The prices may exceed a college wallet but in the end, I regret nothing. It’s easy to get sucked into the atmosphere and creamy delights of Farrell’s, and when you hear the faint train whistle upon exiting, it’s hard not to feel bittersweet.